Medals In The Bag For Some Nations 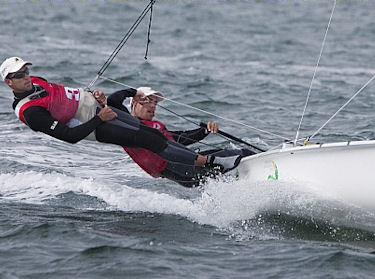 A brisk northwesterly breeze on day 5 of US SAILING’s Rolex Miami OCR made up for the races lost to light air on Thursday. The conditions, though chilly by Florida standards, played out perfectly for the final races of the qualification sers. The British and French teams have dominated in the 470 Men and Women from the start of the event, and for the 470 Men their persistence has been rewarded with medals already in the bag for Great Britain's Luke Patience and Stuart Bithell and Australia's Mat Belcher and Malcolm Page after Friday's two races. Although the colour of their medals will be determined in Saturday's Medal Race.

Races 7 and 8 wrapped up the qualifying series, with a race win apiece to the Patience/Bithell partnership and to Mitja Mikulin and Sebastian Princic of Slovenia – their best result of the series.

Disappointment for the reigning 470 European Champions, Panagiotis Mantis and Pavlos Kagialis from Greece who were safely in the top ten going into the final qualification day, but found themselves knocked out to be replaced by Germany's Ferdinand Gerz and Patrcik Follmann who delivered a 9, 2 scorecard.

In the women's fleet, medal certainty is not certain for anyone. The day's opening race 6 saw a perhaps surprising race win from Hannah Mills and Katie Archer (GBR), given their performance up until that point.

Series leaders going into the Medal Race, Ingrid Petitjean and Nadege Douroux (FRA) are assured of a top four overall result, but will need to finish the Medal Race seventh or higher to secure a medal. Hypothetically any of the top nine teams have the potential to find themselves on the podium – but the reality of course is likely to be different.

Top-ten finishers from today will get only one chance--a 30- to 40-minute race—to make or break their claim to a podium position. Emulating the Olympic format, the medal race counts double points and cannot be counted as the one allowed discard race when it is added to a sailor’s score line from the rest of the series.