Day 4 of racing at the 2010 470 Junior World Championships in Doha, Qatar delivered the best weather conditions of the Championship so far, which for many teams have translated to best performances.

Teams' weather preference was evidenced in the shift in teams securing improved results today. Four races were held today in the men's fleet to give a total of 6 races on the final day of qualification – a pressure filled race day. The women contested 2 races for a total of 7 qualification races. Today was the day that the 10 teams which will proceed to the Medal Rounds in each of the fleets were determined and it was a tough battle out on the water, but only a taster of what is going to happen tomorrow as the medals are up for grabs. 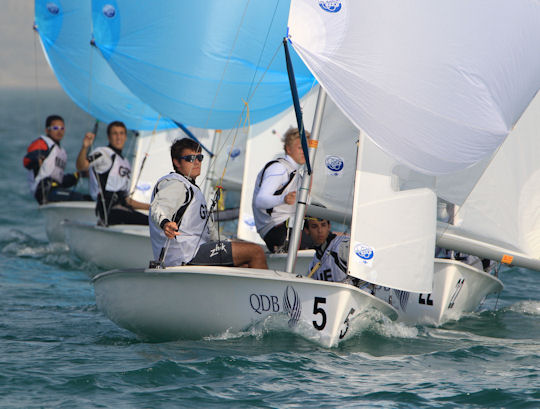 Race 3 for the men's fleet got off first today in a steady and building breeze which started at around 9 knots from 309 degrees. The eight boats disqualified race 3 were waiting on the sidelines of the race course and must have been cursing their disqualification misfortune for race 3 even more today than when they received it yesterday, as the sailing conditions were perfect and they could only wait and watch the race unfold.

In the Men's fleet, 10 teams from seven different nations – France, Austria, Italy, Germany, Japan, Netherlands and Greece – will be fighting for the podium places, although two of those teams are certain to leave Qatar with medals around their necks and will be fighting between themselves for the gold and silver medals. The men raced a demanding four race set today, back to back, for about four hours of racing. 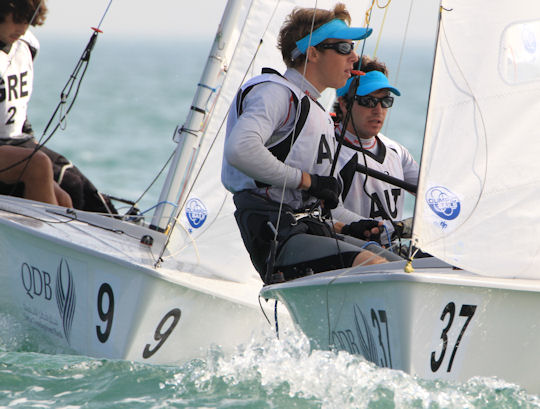 s in all four races, including wins in races 3 and 4. The reward a leap up to second overall going into the Medal Race and a guarantee of the silver and possibility of the gold medal. David laughed when asked where their performance had come from, “It is our coach's birthday today – and as we can't celebrate with a beer in Qatar, we thought the only present we could give him would be some good race results.”

Lukas continued, “Actually we didn't realise how well we had done until we saw the results.” The team went into today's racing in nineteenth overall after a fairly lacklustre performance in the opening two races – and they certainly weren't expecting to end the day with a guaranteed silver medal.

Commenting on the Austrian's performance, Jeremie Mion (FRA) who is first overall going into the medal race and the defending 470 Junior World Champion said, “We didn't know they were that good. Sofian and I realised we had to do something to stop them after their re

sults in the first two races today!” And the French did – going on to win races 5 and 6!

Bouvet and Mion are also the reigning 470 Junior European Champions and have made a rapid rise in the senior fleet as well. “With Sofian, we do not have the same temperament,” reflected Jeremie on why the pairing works so well. “Sometimes Sofian is cool and I am not. And sometimes the other way around. It works well and there is a good respect between us – it has been like this since the beginning.”

Didier Bernard the French coach, gave his own view on their success, “They are like fire and water.”

According to Mahr their plan tomorrow is, “We are just fighting for gold. It makes it easier – we can relax and take a chance. This is the last year we are eligible to compete in the 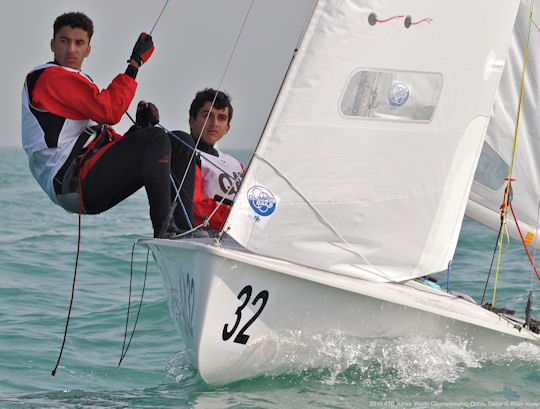 Junior Worlds and we want to make a good result. Austria has never won a medal at the 470 Junior Worlds – we will be the first. Our dream day for the Medal Race would be the same as today – we are really good in stronger winds.”

The bronze medal theoretically could be claimed by any one of the remaining eight teams in the Medal Race. However, there are some who are closer than others.

For the Italian team of Simon Svitz Kosuta and Jas Farnetti, who go into the medal race in third overall, a first or second placed finish will guarantee them the bronze medal regardless of the position of the other teams in the fleet. If they finish third or below, then it is a different story. They won the bronze at the 2009 Junior Worlds, so will be aming to equal that performance. 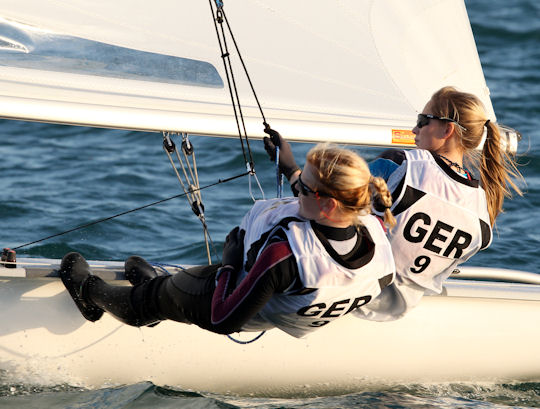 es for the women's fleet delivered some new faces to the front of the races as the weather played to the benefit of the heavier crews. However, the results did not change the overall top three standings as the leading teams have all delivered a consistent results game.

In the Women's fleet, there are six nations qualifying to the Medal Race – Japan, Germany, Poland, Netherlands, Ukraine and Malaysia. The top two boats, Japan's Saki Goto/Hiromi Nishiyama in first overall and Germany's Victoria Jurczok/Josephine Bach are on equal points – but are not guaranteed of a place on the podium yet. They have their work cut out for them tomorrow.

Annika Bochmann and Anika Lorenz (GER) won race 6, and followed up with a third to ensure they held their third overall in the standings going into the Medal Race. They won the bronze at the 2009 470 Junior Worlds and recently sealed the gold medal at the 2010 Junior Europeans so really want a crack at the gold medal here. 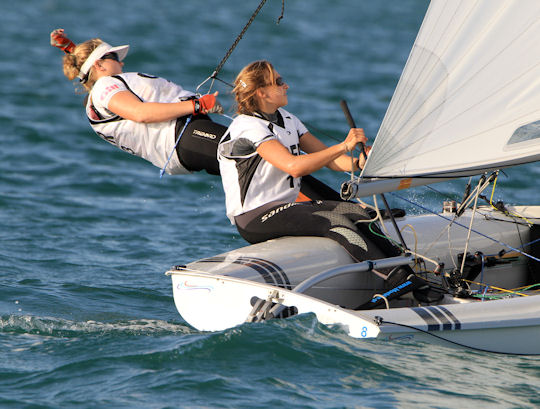 The final qualification race 7 was won by Afroditi Kyranakou and Shannen Marck (NED), marking their best performance in Doha and moved them up to seventh overall. Whilst showing potential form, their result just came a bit too late.

Tomorrow, Saki and Hiromi will be hoping for the light winds in which they thrive, whilst Germany wants the exact opposite, the windier the better for them.

The ideal conditions for the fourth placed Susann Beucke (GER) and her helm Tina Lutz are, “Wind and more wind. Today was our conditions and we would like even more wind.” And the strategy for tomorrow's medal race, “A top three result – that's the plan.” These two are one of four German teams qualifying to the Medal Race. 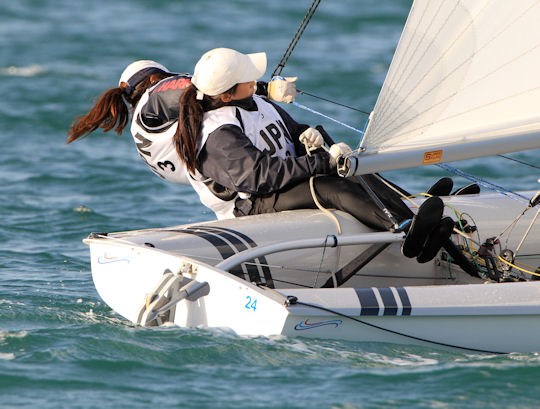 The pressure is seriously on for series leaders Saki and Hiromi who are a light crew and know that the forecast for tomorrow is similar to today. They scored their worst two results of the series, a 7,6 in today's racing as the heavier teams were able to power ahead. However, as Saki admitted she had not anticipated to find herself leading the Championship before she arrived in Qatar. “This is lucky for me. I am pleased. Tomorrow I want to be a champion.” Considering their approach to the Medal Race, Saki said, “We have nothing too much planned. Today I found some more things to tweak the boat, so we will see.”

It is going to be an exciting day when the Medal Races get underway at 1300 hours tomorrow. The teams not competing in the Medal Race will sail a final race scheduled to start at 1000 hours.

The 2010 470 Junior World Championships is a “pay and play” event with brand new supplied 470s. The concept of supplied equipment is a first time experience for many of the teams, and one which the 470 Class is keen to promote. With supplied equipment, all teams compete on an equal footing with only minor adjustments allowed to settings as the boats are rotated between the two fleets.