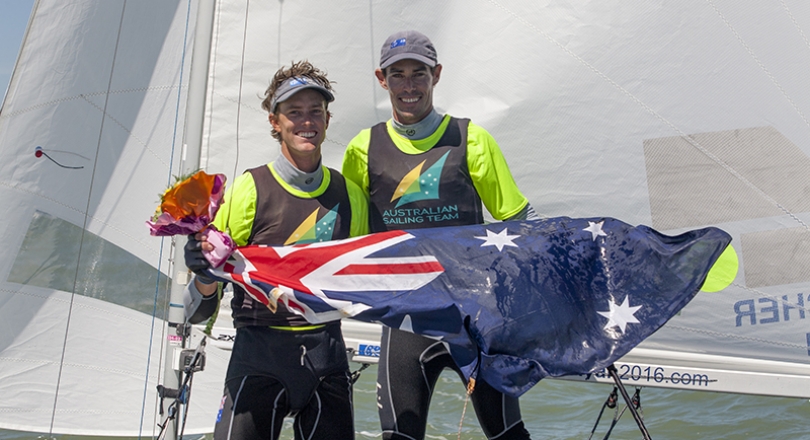 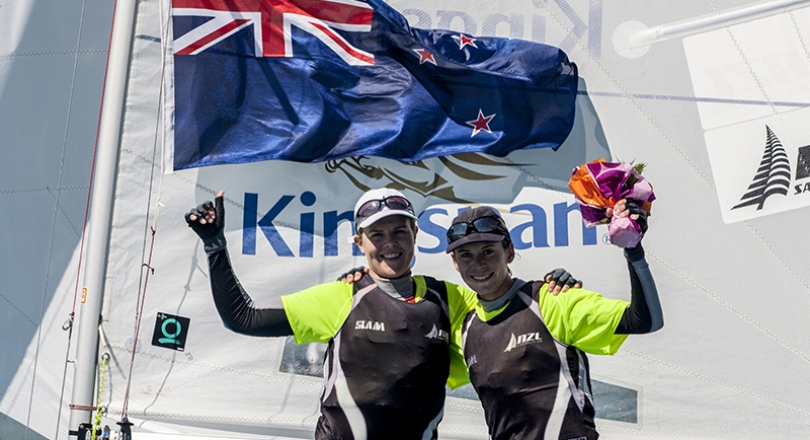 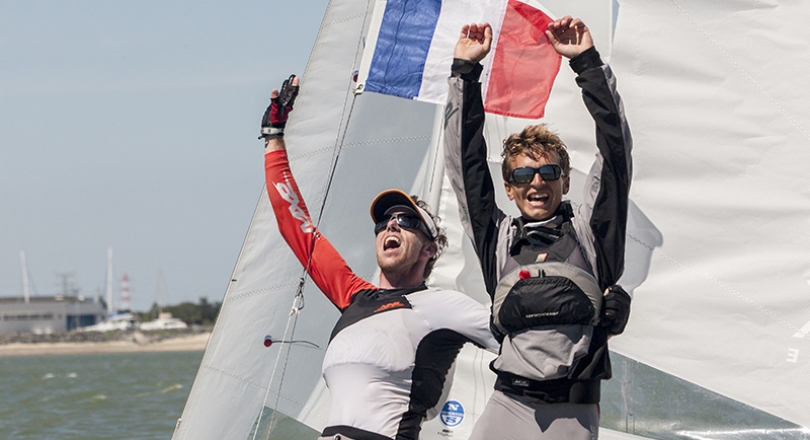 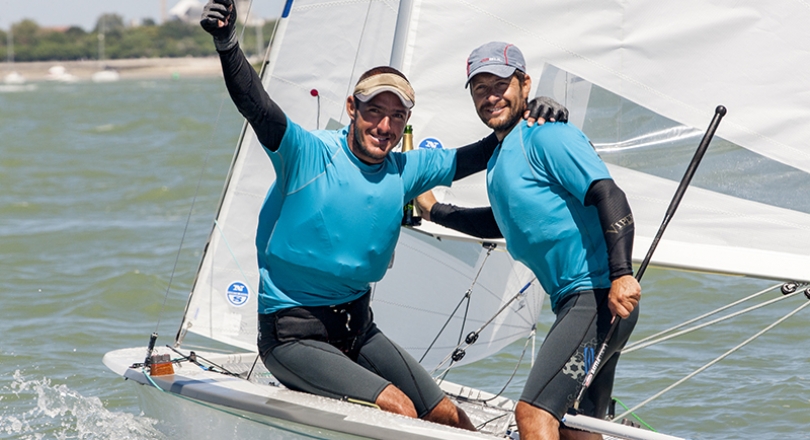 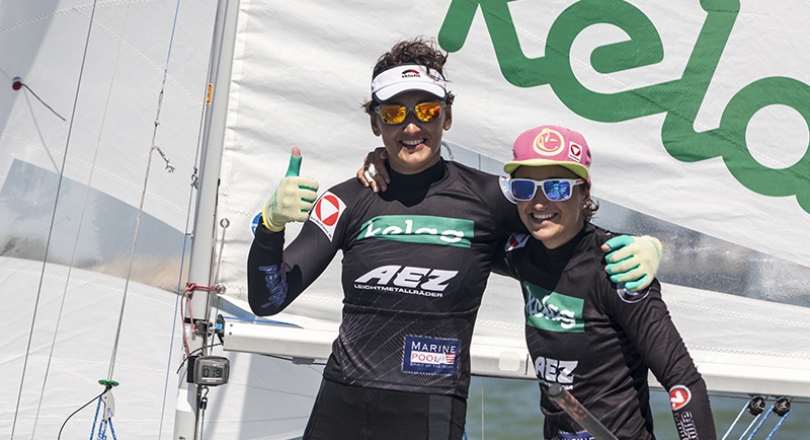 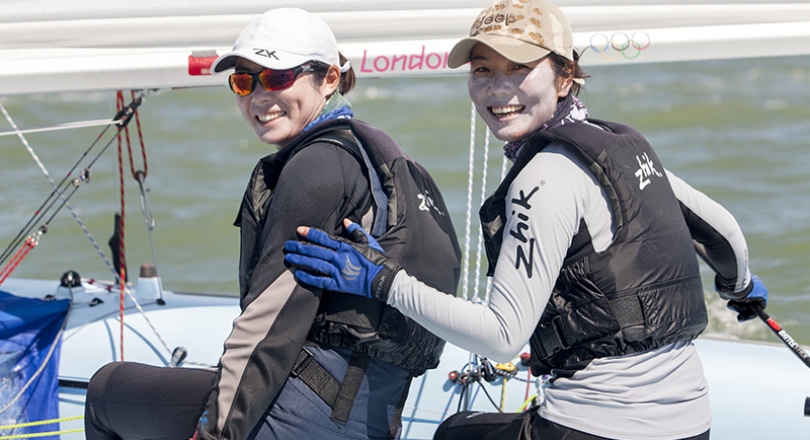 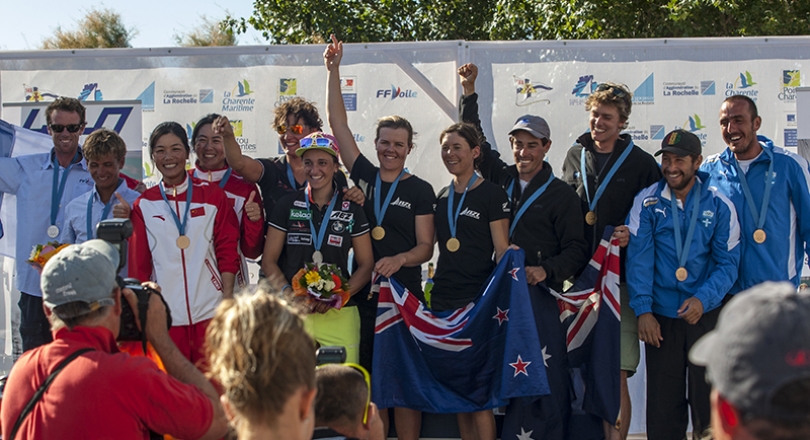 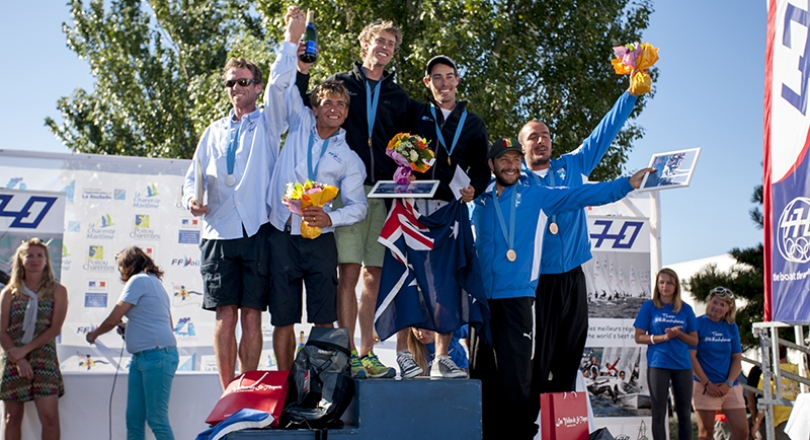 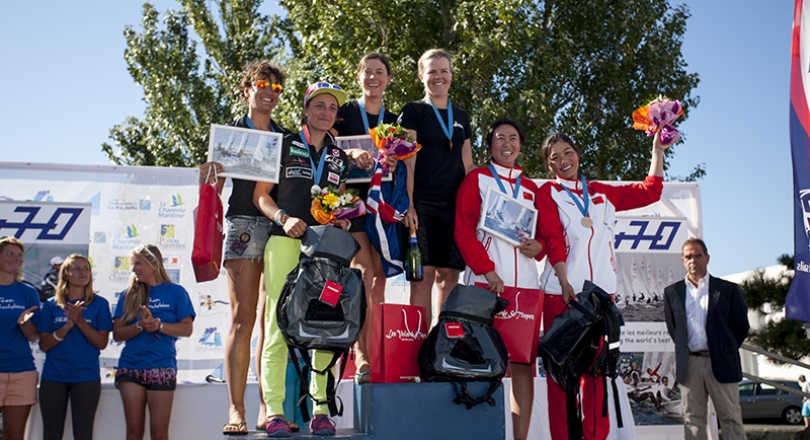 Mat Belcher/Will Ryan (AUS) finish the Medal Race in 6th place to win the 470 World Championship gold, and Jo Aleh/Polly Powrie (NZL) win their Medal Race to secure victory. In a fitting anniversary for the newly crowned 2013 470 World Champions, it was exactly one year ago that Mat Belcher won Olympic Gold, with Jo Aleh/Polly Powrie achieving their gold medal glory shortly after on the Nothe Course in Weymouth. A fitting conclusion to the 50th Anniversary Celebrations of the International 470 Class.

It was a tense medal deciding day, with the top 8 boats in the 470 Men and 470 Women events ready for the challenge of the short course 25 minute double-points scoring medal race to decide the Gold, Silver and Bronze medallists. From a very light breeze in the morning, the wind was around 10 knots for racing.

470 Men
Leading the fleet going into the medal race, Belcher was on a mission to secure his fourth consecutive 470 world championship title – so a fight to the end was on the cards, particularly with the Greek team of Panagiotis Mantis/Pavlos Kagialis who were just 7 points behind the Australians. Mantis/Kagialis were on their fifth attempt to win a World Championship medal, and today marked the closest they had ever been to their goal. 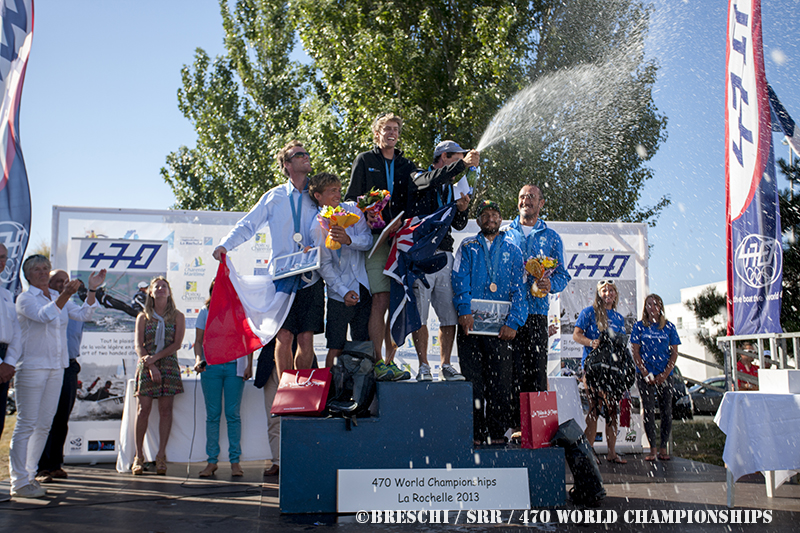 Argentina’s 2012 Olympic bronze medallists and world #7 ranked pairing of Lucas Calabese/Juan de la Fuente faced an even tougher battle to step up to the podium, sitting 6 points behind the Greeks, and with France’s Pierre Leboucher/Nicolas Le Berre 4 points behind them. After a high scoring last day of finals, the French had their work cut out to claim a medal with only a front of pack finish set to guarantee a place on the podium.

The 470 Men Medal Race got underway at 1450 hours with the Greek team finding the best speed off the line, from their pin end start. But, leading the fleet to the windward mark were Leboucher/le Berre, who executed their medal winning strategy perfectly. Great Britain’s Luke Patience/Joe Glanfield, who had an outside chance at a medal, were in second place, with the USA’s Stu Mcnay/Dave Hughes in third.

Approaching the windward mark, Calabese/de la Fuente were forced to cross behind the fleet and suddenly found themselves drop from 4th place, and in with a shot at the bronze medal, to last overall. With the French leading, the silver medal was in their hands, and they remained in total control and safely secured the race win with a massive lead. Patience/Glanfield finished in second place and New Zealand’s Paul Snow-Hansen/Daniel Willcox in third. 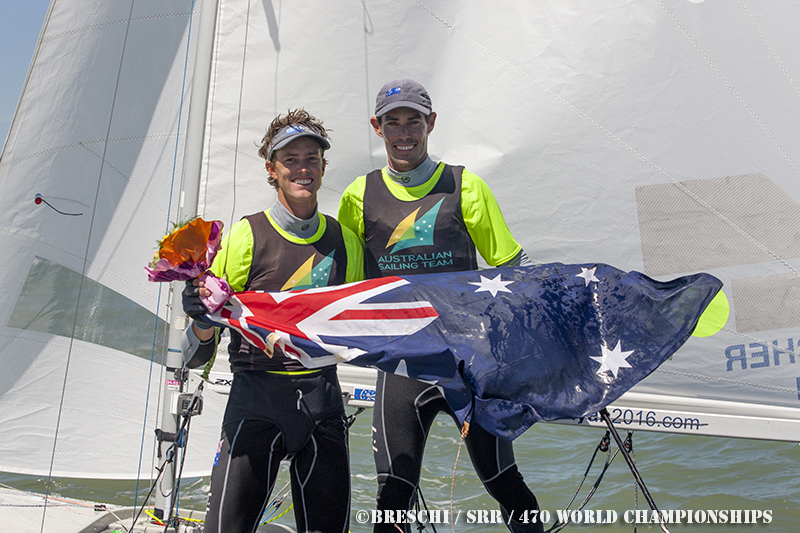 Belcher/Ryan did what they needed to and finished in sixth place, which was more than enough to crown them as the 2013 470 World Champions – a year to the day that Belcher became the 2012 Olympic Champion. Leboucher/le Berre secured silver and Mantis/Kagialis bronze, despite finishing last in the medal race.

“I think it is more relief today,” said Belcher. “It is quite funny that it is exactly a year ago that I won Olympic Gold. For Will and I, we had a lot of pressure, and a lot of pressure on Will. This year since teaming up – it has been phenomenal. We are really excited, but more relieved than anything else to finish the season off like this.”

For Ryan, success cannot get any better in such a new partnership. “It is pretty unbelievable,” he said. “It has been four years coming to work towards helping Mat, Mal and Victor achieve their goal, and it is really nice that now I have had the opportunity to work a little bit closer towards mine. This is the first step, I am really enjoying it, and it has been a fantastic year for us. Having Mat at the back of the boat is phenomenal, I am the luckiest crew here. Victor looks after us too. I knew that we were always in with a chance and that was what we wanted at the beginning of the week, to make sure we came into the medal race with a chance. It is a good outcome.”

Four back to back World Championship titles must certainly be an unprecedented achievement in the sport. “The journey of last year and this year is phenomenal,” said Belcher. “I don’t really keep track of wins. But it is not just myself and obviously having that partnership with Mal and now to have the partnership with Will is quite something. This week has been really difficult, and I am about to become a father in three and a half weeks and have been studying, and there has been a lot of pressure on the people around me. All credit to Victor and Will for supporting me.”

France’s Pierre Leboucher/Nicolas le Berre have matched the silver medal Leboucher claimed at the 2012 470 Worlds with former crew Vincent Garos. “For me our objective was to finish in the top 8 here, so today is a bonus to get the silver medal. I liked the conditions today and we had really good speed and good tactics. Nicolas is a great crew.”

A World Championship medal has been five years in the making for Panagiotis Mantis/Pavlos Kagialis. “We are really happy about the results,” commented Kagialis. “I think we deserved a medal over the last three years, but we take it now. We didn’t have such a good race today, but we don’t care, the medal is what is important. It is very difficult in the economic situation in Greece, and I hope this will help us a lot over the next years on our road to Rio.” 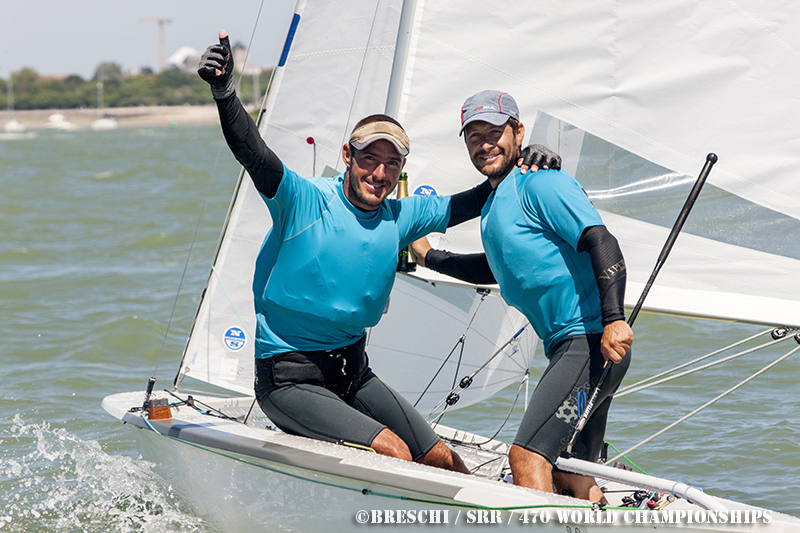 470 Women
Jo Aleh/Polly Powrie have secured two previous 470 World Championship medals, a silver in 2010 and bronze in 2011, and today they completed their collection by winning the ultimate gold medal.

Achievements don’t get much better than being crowned Olympic Champions and World Champions within one year, as Jo Aleh acknowledged, “It is pretty good. We were actually just talking about it on the way in and we are almost more excited today I think than the Olympics.” Laughing she said, “I guess we’ve done five World Championships and we have stuffed up three of them in the past, and we really wanted to get it right. We have had a few medals, but never the gold.” 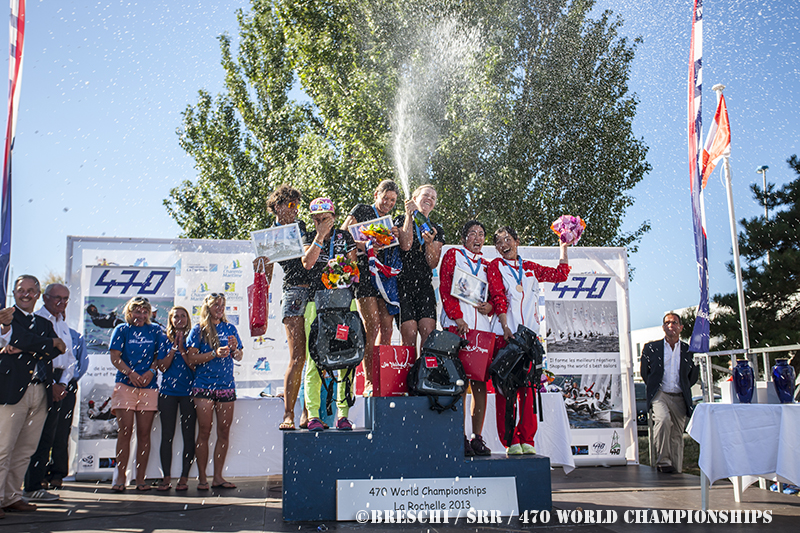 Last night was the eve of their Olympic anniversary glory, which Aleh said the pair were chuckling about. “Last night a year ago we were worrying about the medal race and equal points at the Olympics, and today it was a lot nicer having the points buffer. It was good fun and awesome to go out there and enjoy the medal race. This is the end of our season and the big one of the year and it was really important to get it right.”

An emotional day, as Powrie explained, “It always means a lot to us to win a medal. You put so much time and effort into these things, so to be able to pull it off is always a massive relief as you always put pressure on yourselves to do it. But at the same time you are stoked.”

“No we didn’t need to win it,” continued Powrie, referring to their medal race win. “We were just chugging away up the beat and down the run, as you do, and we found ourselves at the front at the bottom mark!” 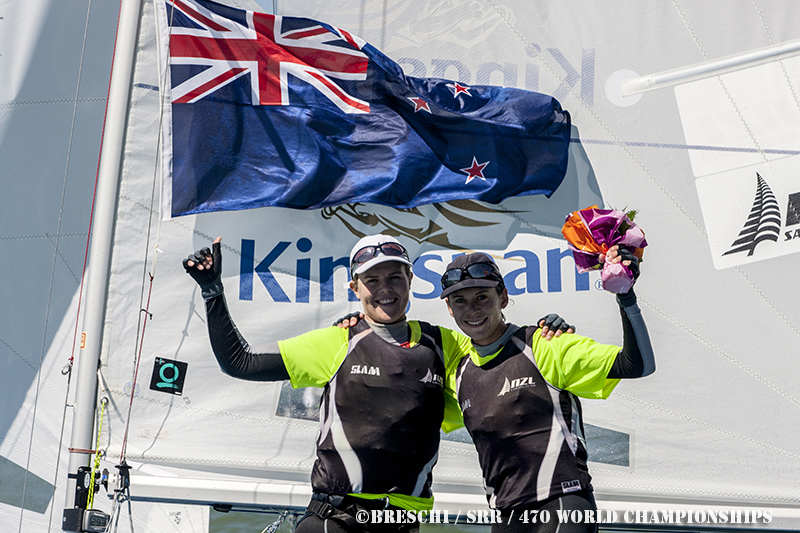 In a last minute change to the leaderboard standings this morning, a penalty was awarded to Austria’s Lara Vadlau/Jola Ogar for not correctly signing in before racing yesterday, which knocked them back to third going into the medal race behind Camille Lecointre/Mathilde Geron of France.

The penalty seemed to fire up the Austrian pair, and an amazing upwind leg put them into the medal race lead, with China’s Xiaomei Xu/Chunyan Yu in second place, Australia’s 2008 Olympic gold medallist Elise Rechichi and crew Sarah Cook in third and the Kiwis in fourth place - and assured of the Gold Medal. By the downwind gate, Xu/Yu had taken the lead, with Vadlau/Ogar now trying to outpace Aleh/Powrie who were closing on in. But ultimately the race belonged to the Kiwis, with the Chinese finishing in second place and Austrians third. 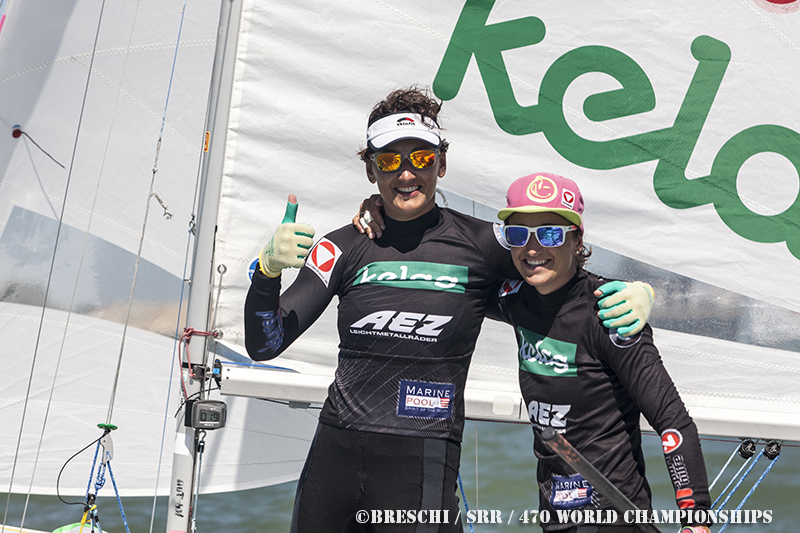 “We are so happy to get the silver medal, it is just amazing. We were so motivated to get this medal for sure,” said Ogar. “It was good the men starting before, because we saw their race and saw what was happening on the course and the right side was totally favoured every upwind and we decided we wanted to go to the right side.”

Two Chinese teams qualified for the 470 Women medal race, and history was made for China when the 2012 Olympic team of Xiaoli Wang/Xufen Huang crossed the medal race finish line in 6th place and secured the bronze medal; the nation's first ever 470 World Championship medal.

Wang said, “We are very, very happy. Before we came here, we weren’t thinking about a medal, we just wanted to do our best and see our ability. Our results come from our hard work and also from our coaches Kevin Burnham and Nick Drougas.” 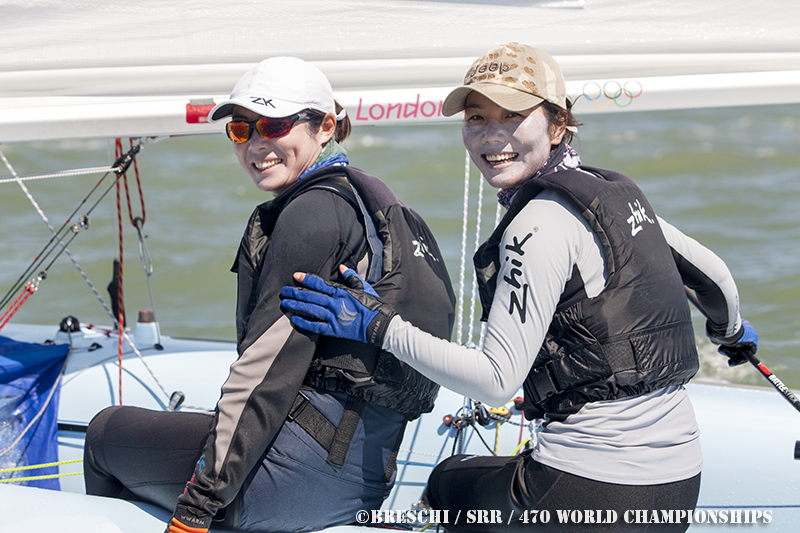 Soon after racing the Medal Ceremony was held at the host club, Société des Régates Rochelaises (SRR). In a fitting tribute to the World Champions and concluding the 50th Anniversary Celebrations of the International 470 Class, the gold medal winning teams were presented with a commemorative trophy on behalf of François Hollande, President of France.

On behalf of the sailors, President of the International 470 Class Association, Stanislav Kassarov, thanked Claire Fountaine, Commodore of SRR for hosting the 2013 470 World Championships and 50th Anniversary Celebrations of the 470 Class.