Ku Anas Ku Zamil of Malaysia declared yesterday that he was aiming for a podium finish with crew Mohamad Hafizzudin Mazelan at the 2010 470 Junior Worlds in Qatar. 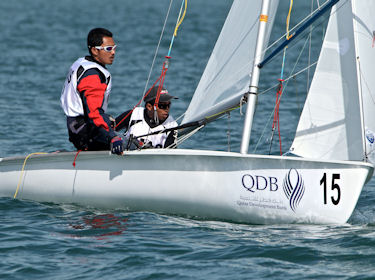 He clearly meant it as he crossed the finish significantly ahead of the pack at today's opening race for the men/mixed fleet.

It almost became a Malaysian takeover in the women's fleet as well as team mates Hairunnisa Mohd Afendy and Ameira Izla Zulkifli were only metres away from clawing back the race win they had on their plate for most of race 1, but which ultimately went to Victoria Jurczok and Josephine Bach (GER). The teams had a real tussle around the course, but the Malaysians let slip on the last downwind leg.

Predominantly light winds were the order of play today, with the schedule of three races apiece being revised to deliver two races for the men/mixed fleet and one for the women. 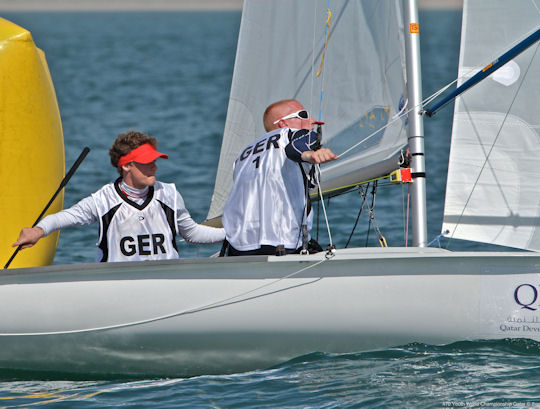 A frisky start to Race 1 saw the first general recall of the day, before the fleet got off tidily with most heading left off the line, including the Malaysians who went on to bag their position at the front of the fleet by the first windward mark. Chasing hard, and occasionally getting a bit of extra speed that snatched a momentary lead, were top seeded German team Daniel Zepuntke and Dustin Baldewein. But glory was only going one way and Ku Anas Ku Zamil and Mohamad Hafizzudin Mazelan (MAS) deserved every moment, controlled the race and held onto a significant delta. Fresh from securing the bronze medal at the 2010 Asian Games last month in the 420, they have demonstrated a supreme transition between the two classes.

Check out this really cool 3D video produced by Icarus using the tracking data from TracTrac. This is a test project with Icarus and TracTrac who have worked together. Special thanks to both.

Another general recall for race 2, followed by a postponement, then a start, before abandonment on the final windward leg. A good outcome for those who made the decision to head left upwind and found themselves slipping back as the wind died on that side of the track. Race 2 got underway again, in continuing shifty conditions, with the fleet bunched up to the Race Committee boat and a RRS42 penalty awarded to Sotirios Tsamis and Faidon Kounas. This cost them dearly, and they went on to deliver a result of 26, compared to a sixth in race 1.

Malaysia got lost in the bunch and couldn't recover – a one hit wonder for race 1? We think not, keep watching them.

Race 2 was a German affair from start to finish, with Daniel Zepuntke and Dustin Baldewein jostling for the front running against brothers Julian and Philipp Autenrieth. Julian and Philip headed right and led to the first windward mark, with the next 13 boats trailing but significantly ahead of the rest of the fleet. It was all in the start in race 2, and those caught up in the bunch were stuck at the back throughout the race. 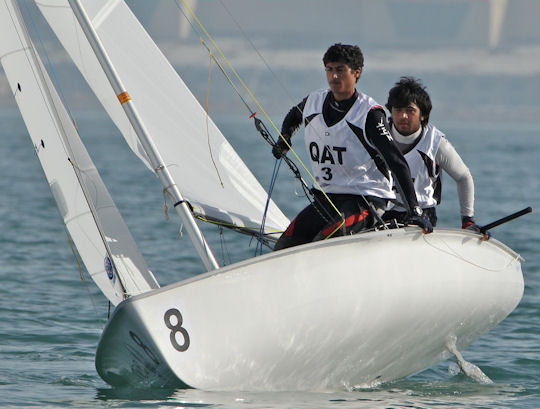 eeled in the brothers and soon became master. Reflecting on their tactics, Daniel said, “We made the decision to head right up the first windward and we had the best side of the start line – it made the difference.” Whilst pleased with their result, which sees them lead the fleet after day 1, Daniel admitted, “We don't feel sure or safe. If it continues to be light winds, it is going to be hard. We are happy with what we did, with the boat today and everyone needs a bit of luck!”

So where were the defending World Champions? Sofian Bouvet and Jeremie Mion (FRA), were buried in the pack for much of the early parts of both races, but ended up being one of only two boats to have any consistent form today and post two single digit results, a 5,7 to finish day one in second overall.

The host nation's Faris Albakri and Jassim Al-Sulaity were keen to point out that up until a couple of weeks ago they had not sailed a 470, being more familiar in the Laser, but are enjoying the boat and sailing together. 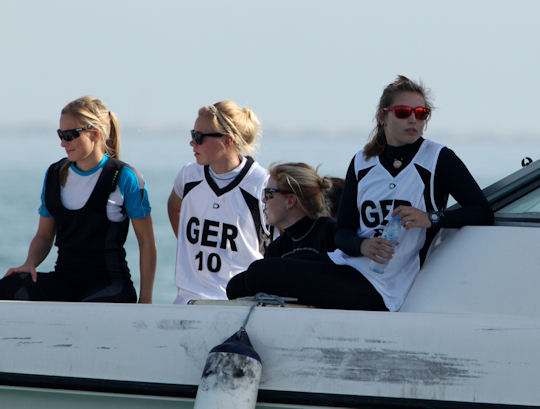 Watching the men/mixed race 2 unfold from the track perimeter were the women's teams, who had the benefit of being spectators as they waited for their race. A swift boat rotation and the women's fleet were soon in starting sequence as the Race Committee squeezed in another race before the sun went down.

Malaysia looked as though they were going to also dominate in the Women's fleet as Khairunnisa Mohd Afendy and Ameira Izla Zulkfli took an early lead. Like their team mates in the men's fleet, they are fresh from a medal triumph at the 2010 Asian Games, a silver in the 420. 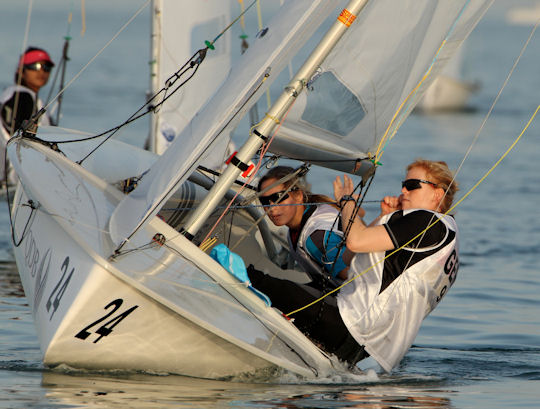 podium here in Doha. Commenting after the race Victoria said, “We like light winds, I hope it continues!”

Behind these two, Japan's Erika Tokushige and Mayo Yasuda and Saki Goto and Hiromi Nishiyama took third and fourth.

There will be no racing tomorrow, Saturday 18 December, as Qatar celebrates National Day. Racing will resume on Sunday 19 December, with the women's fleet scheduled to get underway at 0900 hours.

The forecast is light winds for Sunday and Monday, before we get some more serious breeze for the final two days on Tuesday and Wednesday.