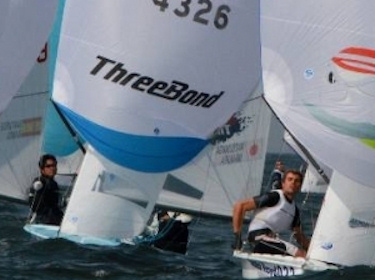 Finally after an unorthodox few days off the Hague, with the wind and wave states severely disrupting the race schedule, for the first time at the Delta Lloyd 470 World Championship the organisers were able to hold three races back to back, on time, allowing crews to return to shore by mid-afternoon.

Today, day 5 of the World Championships, was when for many the ‘real’ competition began, the fleets now divided into three – gold, silver and bronze in the Men’s class and two in the smaller Women’s class. With winds starting out at 20-25 knots with gusts of up to 28 and decreasing slightly through the day as the waves began to be churned up by the tide, so crews returned to the Hague’s new International Sailing Centre soaked to the skin, salt encrusted and utterly exhausted.

470 Women
Undoubted class act of the day were defending World Champions and local heroes, the N 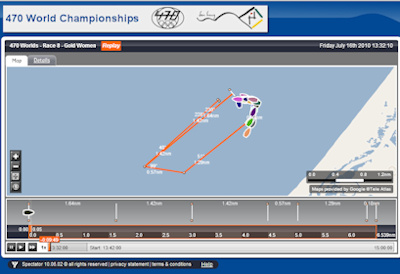 etherland’s Lisa Westerhof and Lobke Berkhout, who won all three races in the Women’s Gold fleet.

“In these conditions we are the strongest team,” said towering blonde Berkhout. “If we have a good start and we have a good game plan and good speed, and no risk, then we end up at the top. That happened today. Everything fell in the right way.” The Dutch duo definitely looked fastest today among the Women, a combination of talent, local knowledge but also benefiting from being at the heavier end of the crew weight spectrum in the strong conditions. “We have lost some weight for this season, because we thought we could gain something in lighter conditions, but I am still really tall,” admitted Berkhout.

While Westerhof and Berkhout’s three wins have put them into the lead, they are just one point ahead of yesterday’s leaders, New Zealanders Jo Aleh and Olivia Powrie. They posted a 3-2 in today’s last two races, a sound recovery after their main halyard disastrously snapped halfway up the first beat in race one. “We checked it all yesterday, but it just snapped right at the top,” explained Aleh. “We flipped it over and tried to get it back up, but it is a three person job.” They now have a ‘DNF’, blemishing a scoreline where their lowest score is otherwise a fourth.

Overall in the Women’s Gold fleet the Dutch and New Zealanders together with Italy’s Guilia Conti and Giovanna Micol, now in third, remain close, separated by seven points, the lead three now extending ahead from fourth placed Ingrid Petitjean and Nadège Douroux from France.

470 Men
In the men’s division, today’s three races have resulted in some reshuffling of the top boats. Australia’s Matt Belcher and Beijing gold medallist Malcolm Page continue to hold the top spot and a win in today’s final race has provided them with a small cushion ahead of second.

“Winning the last race was nice - good for confidence,” said Belcher. “There are still three races to go, but in this fleet you can easily come away with three 20+s. We are happy to still be in there and tomorrow we’ll keep on fighting for the lead.”

But the heroes of the day in the Men’s class were the Coster brothers Sven and Kalle from the Netherlands, who posted a 2-1-5 elevating them from 11th into third place overall and the young British pair Luke Patience and Stuart Bithell, who surprised everyone (including themselves) when they won silver at last year’s 470 World Championship in Denmark. Winning today’s first race and following it with a 5-4, has resulted in Patience and Bithell taking over second from Skandia Team GBR teammates, Nic Asher and Elliot Willis, the double World Champions now down to fifth.

“It was our conditions,” enthused Patience. “We love the breeze. We love the waves. It is something we are very confident in, so we can push a bit more and pull through the fleet if we are maybe slightly back. We had three good races – we are dead happy.”

The 23 year old Scot added that when the sea got up from race two onwards it had started to get brutal for the crew out on the trapeze wire. “It was very difficult for Stuart to not get hit by every wave, regardless of how high he was wiring. It was hard to get in the groove upwind, but if you could do that it was huge gains.”

Also on form in the Men’s gold fleet were Greece’s Panagiotis Mantis and Pavlos Kagialis, who since this morning have risen from 10th to lie currently fourth, just three points from second. “We like these conditions,” said Mantis, adding that they are similar to the Meltemi wind in Greece. “We have done a lot of waiting, but today it was okay – three races, good wind, we finished early. I hope the same for tomorrow.”

Similarly performing well in today’s big conditions were the experienced Italian 470 sailor Gabrio Zandonà (whose first World Championship was back in 1998) and his new crew since February, Pietro Zucchetti.

“I enjoyed myself today - it was a very good,” said Zandonà. “Conditions were really strong, but we like that. I have a very good crew now - Pietro is strong in strong wind – it is easy to sail with him.”

Tomorrow will continue with three more finals races before the medal race for the top ten on Sunday, scheduled for 1400 local. While all the races can be followed on the tracker, video from the medal race is to be broadcast live from the official Delta Lloyd 470 World Championship website.