Winds gusting up to 28 knots tested the 92 teams to the limit in Medemblik on day two of the Delta Lloyd Junior 470 World Championships. 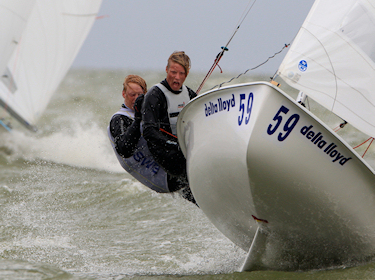 Local Dutch team Nina Keijzer and Anneloes van Veen looked very comfortable in the big breeze, taking a big lead that took even them by surprise.

“We started well, were going very fast and suddenly we were ahead of the fleet,” said Keijzer. “The Australians came back to us on the downwind legs, carrying the stronger down with them and there wasn’t much we could do about that.” But Keijzer and van Veen moved away again to score a dominant victory in the first heat.

Others weren’t so fortunate with a number of broken masts, including the Malaysians and Japanese. They said they would be praying for the wind to drop, although the forecast suggests the wind gods have another strong day in mind for Sunday.

In the second women’s heat, the German team of Annika Bochman and Anika Lorenz were lying in first place as they approached the windward mark, with the rain lashing down, massively reducing visibility and the wind gusting to its highest strength of the day. Bochmann and Lorenz are looking to improve on their silver medal from last year’s Junior World Championship, and a race win would have been very useful - but it was not to be. The race committee abandoned the race, sending the girls teams in before more carnage ensued.

Keijzer and van Veen’s race win moves them into the lead overall, ahead of yesterday’s leaders from Great Britain, Anna Burnet and Flora Stewart, with Bochmann and Lorenz in 3rd overall.

The Men/Mixed Fleet is split into two divisions of 30 boats. Two race wins by British team Phil Sparks and David Kohler suggests they dominated the day, although they didn’t take the lead until the very end of race one.

German brothers Steffen and Sven Hessberger led around the first mark but struggled on the tight spinnaker reach and let the Greek team of Vasileios Papoutsoglou and Faidon Kounas get ahead by the second mark. At this point Sparks and Kohler were in 5th, but the difference was that they stayed upright while others capsized. “We were lucky as both the Greeks and the Swedish capsized so we finished the first race first,” said Sparks. And they won the next race too. A good regatta for a new pairing. “We have only been sailing together for three weeks. This is my second year in the 470 and the first for my crew so I guess it’s a pretty cool start for us."

The Brits may be leading the Mens/Mixed Division, but on the other side of the draw the Swedish crew of Nicklas Dackhammar and Fredrik Bergstrom were also looking strong with scores of 1,3 from the blue group, and are just a point behind first place on the leaderboard. Kevin Peponnet and Julien Lebrun are in third overall, but the French coaches Didier Bernard and Sofian Bouvet (2010 Junior 470 World Champion) think it will be tough for a French team to win if the strong wind continues throughout the week. “It wasn’t such a good day for the French team,” said Bouvet. “The British and the Swedish are much stronger in these weather conditions. We wait for the wind to drop a bit and we’ll see, but it will be hard for the French to win this Championship.”

Still, this is only the qualifying phase of the regatta and there are five more days of competition yet to come. The Dutch girls are hoping for the breeze to continue. “We like the strong wind because we are tall, but any wind will do just fine. There are about 12 teams that could win this event, so it’s very early to say who might win.”

This afternoon after racing, Olympic silver medallist and five time 470 World Champion Lobke Berkhout came to speak to the sailors about what it’s like to campaign at the top level. She talked about boat preparation and also the importance of building up the support of sponsors who will provide the backing needed for full-time Olympic campaigning. It was an inspiring talk and the sailors enjoyed the chance to meet one of the most successful 470 sailors of all time.