The men/mixed fleet were up early this morning, ready for a scheduled race start of 0900 hours. 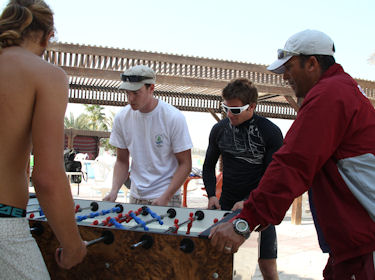 However, whilst the sailors were ready, the wind was not and the sailors waited ashore for the wind to fill in where football rather than sailing took a focus.

After a few hours ashore relaxing, which included a table football match between Greek and German sailors and refereed by Qatar, the sailors were sent out to race.

Race 3 for the 470 Men/Mixed fleet got underway this afternoon around 1415 hours, only to be followed by a general recall. Up went the black flag for the race re-start, giving notice to the competitors that any boat over the line in the minute before the start would be disqualified from that race.

A massive warning to the sailors to err on the side of the caution as they edged up to the starting line, as a disqualification penalty would significantly blot their scorecard. With only two races sailed so far in the men/mixed fleet, the scores for every race still count and with one day of racing to go before the finals, caution was the name of the game today. Not so for eight teams who were over the line and therefore automatically disqualified from the race.

As it turned out that race was subsequently abandoned just before the start, as the wind died completely. But the black flag rule applies during that final minute of the staring sequence, so race abandonment offers no concession to the eight disqualified teams. Race 3 will be resailed tomorrow with the disqualified boats unable to compete. 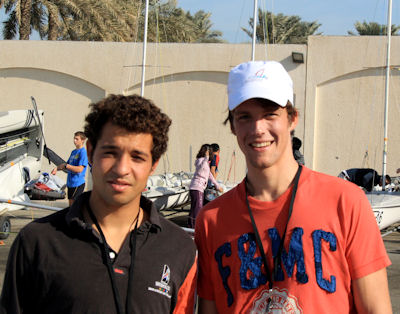 What is disappointment for one team is another's gain, as is the case for defending Junior World Champions Sofian Bouvet and Jeremie Mion (FRA). Going into race 3 in second place after race results of 5,7 they were chasing the leaders Daniel Zepuntke and Dustin Baldewein (GER) who were on a far superior scorecard of 2,1. But Zepuntke and Baldewein fell foul of the black flag rule and have now opened a massive opportunity for Bouvet and Mion.

Jeremie couldn't help smiling as he said, “Today the only thing was to not be over the start line. It was hard as we waited for the wind and then the race was started and many were over. The leading boat was blackflagged. So for us if we do good races tomorrow we should do ok.” A team who have come so far so fast in their sailing achievements are clearly looking confident going into the final day of qualification races and virtually certain of going through to the Medal Race.

Sitting tight in third overall going into tomorrow are the Italian team of Francesco Falceterllia and Gabriele Francoiolini with a 5,7 scorecard. 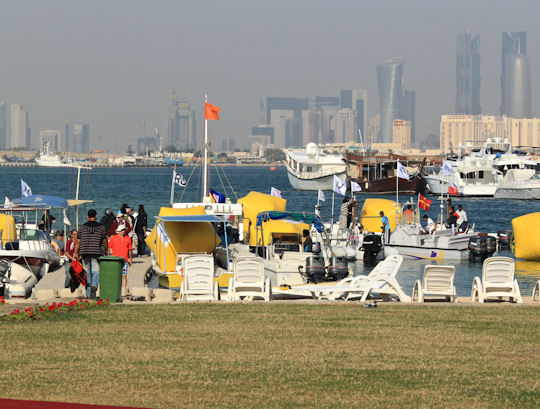 All focus is now on tomorrow, the last day of the qualification series. The top 10 boats from each fleet, men/mixed and women, will go through to the Medal Race, with the remaining boats competing in a final race. The Medal Race is a double-points scoring race, so finishing high up the fleet is key to maintain a low overall points score.

Despite his black flag infringement, Henrik Simon (GER) was more focused on the forecast for the next few days and was feeling optimistic. “Tomorrow there will be 18 knots – so we are looking forward to some good sailing. When we saw the forecast this morning, we were all expecting something like this. It would have been great if the Championships was last week when we had the 470 Training Clinic – it was perfect sailing.”

Considering their strategy for the next few days, Simon was certainly honest on his team's performance to date, “There will be no big change because we are really bad at the moment - we are ranked 26! There is no real race strategy – we just want to get up into the top 15. There is no chance of being in the top 10.” 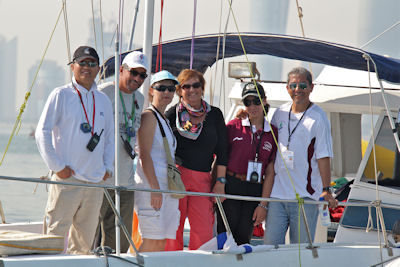 Racing is scheduled to get underway tomorrow at 0900 hours, with 3 or 4 races for the men/mixed fleet, followed by 1 or 2 for the women. Race Officer Qu Chun from China is the man in charge of racing here in Doha and he has a busy schedule tomorrow to get the races in. “Tomorrow we have a very good forecast with good wind. We will be planning to have all races back to back. The boat rotation between the fleets is very swift, no more than 15 minutes, so no time will be lost.”

The forecast is looking good for the final two days of the 2010 470 Junior World Championships with around 13 knots of breeze.

The 2010 470 Junior World Championships is a “pay and play” event with brand new supplied 470s. The concept of supplied equipment is a first time experience for many of the teams, and one which the 470 Class is keen to promote. With supplied equipment, all teams compete on an equal footing with only minor adjustments allowed to settings as the boats are rotated between the two fleets.