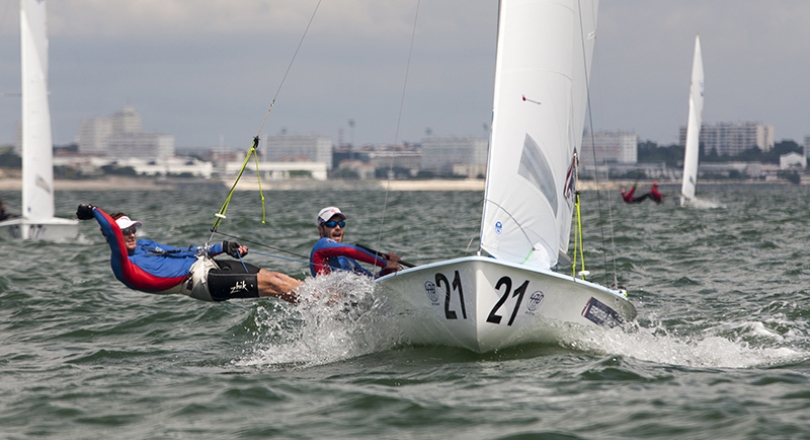 Some major changes in a shuffle of the leaderboard top 10, with a tricky day of racing delivering contrasting results for teams, as the wind shifted and the pressure continually changed. An incredibly hard to read race course, with inconsistency in results keeping the scoreline close with only a few points between teams on this first day of finals. Mat Belcher/Will Ryan (AUS) briefly lost the lead to Great Britain’s Luke Patience/Joe Glanfield after the day’s opening race. The same story for Camille Lecointre/Mathilde Geron (FRA) in the 470 women, with Jo Aleh/Polly Powrie stepping up to the front after the first race, but by the end of the day, the scoreboard ended where it started with the Australians and French on top.

470 Men
Olympic silver medallists Luke Patience/Joe Glanfield briefly knocked Australia’s Mat Belcher/Will Ryan off the top spot after claiming the race win in the day’s opening race, but not for long with the Australians bouncing back with a second place to reclaim their pole position.

The British pair followed up with a 14th in race 2 to end the first day of the final stage in 4th overall.

“It’s gone quite well. We’re in a decent position at this stage. It’s been difficult – the wind has been pretty hard and difficult to read and there have been a lot of place changes,” said Glanfield. “We’ve just got to try and keep improving really – we’ve got to learn from the mistakes we’ve made and see if we can sail a bit better each day.”

Despite their independent pedigrees, a new combination takes time to come together, as Glanfield explained, “This is our first World Championships together so I don’t feel a huge amount of pressure. We’ve got an expectation of where we want to come. We’ve worked hard up until this World Championships. We don’t think about the result too much, we just keep concentrating and try to sail better than the day before, learning what we can. But we’re here to try and get the best result we can.”

New Zealand’s Paul Snow-Hansen/Daniel Willcox claimed the win in the second race of the day and moved up one leaderboard position to second overall. After nailing the start and heading to the right hand side of the track, the pair took a perfect layline to the mark and safely held the lead from the windward mark onwards.

“The wind out there was pretty hard work and a lot of top teams ended up at the back of the fleet at some stage,” said Snow-Hansen. “The wind didn’t have an obvious trend to it and you had to take your chances. It worked for us in the second race and we were really happy to hold of the Aussies and they sailed really well. We are just concentrating on ourselves and it is still early in the regatta, so we don’t really know where the competition will come from. But there are a few teams who really struggled today more than us. After our 14th, we had to put our best foot forwards,“ he concluded.

In third overall and on equal points with the Kiwis are the recently crowned 470 European Champions, Sofian Bouvet/Jeremie Mion from France. The pair made their names in the 470 Junior fleet, winning back to back victories in the Junior Worlds and Junior Europeans in both 2009 and 2010. Today a 9, 5 scoreline was enough to push them up into third.

The day was really tough with teams pushing out inconsistent results as they struggled to get a grip with the unpredictable race track. Amongst the most consistent pairs were Spain’s Onan Barreiros/Juan Curbelo who moved up 10 places to 6th on the leaderboard after a 5,3 scoreline.

“I am really, really happy,” smiled Barreiros. “I have a new crew, Juan. Two months ago Juan had an accident with a bicycle and we virtually stopped sailing, but now I am really happy not for the results, but for Juan. The injury was a big problem for us, as we are in the selection process for funding for 2014, but now if we are in the top 8 then for the moment I am happy.”

Turkey’s 2012 Olympian, brothers Deniz and Ates Cinar lead the silver fleet, with Great Britain’s Tom Kinver/Ben Palmer in charge at the front of the bronze fleet. Both race wins in the bronze fleet went to Ridgely Balladares/Rommel Chavez from the Philippines.

470 Women
Jo Aleh/Polly Powrie (NZL) got themselves back into the top spot after the first race of the finals stage today, ousting Camille Lecointre/Mathilde Geron (FRA) back to second on the leaderboard.

But an awkard error after racing today forced the Race Committee to award them a 5 point discretionary penalty, as the team explained, “Unfortunately for us we made the totally rookie error of not signing off in the time period at the end of the day so have had five points added to our score-line. We have no excuses for it, just simply forgot, a seriously frustrating mistake to make.” A penalty score and 18th place in the second race has dropped them to 6th overall.

After today’s two races, Lecointre/Geron remain at the top with China’s 2012 Olympic team of Xiaoli Wang/Xufeng Huang 2 points behind in second and Slovenia’s Tina Mrak/Veronika Macarol another two points behind in third.

From a leaderboard position of 15th at the start of the day to third at the end, was a result a bit ahead of today’s plan for Slovenia’s Tina Mrak/Veronika Macarol. “We did two good starts and then just sailed fast,” commented Mrak. “We were in front at the first mark, so it made the racing easier. We are very happy with today’s results.”

Mrak represented Slovenia at the Olympics, but has now paired up with new crew Macarol. The pair competed together around 4 years ago and finished in bronze medal position at the 2008 470 Junior Europeans.

China is proving dominant in the fleet, with two teams in the top four and just one point behind the Slovenians are Xiaomei Xu/Chunyan Yu.

The two Brazilian teams, Fernanda Oliveira/Ana Barbachan and Renata Decnop/Isabel Swan were neck and neck in 9th and 10th respectively going into the first day of finals, but all change by the end of the day as Oliveira/Barbachan push up to 5th, with Decnop/Oliveira dropping out of the top ten to 13th.

At the 2008 Olympics, Oliveira/Swan won Olympic bronze, before moving on to separate partnerships and campaigning against each other for the one Brazilian slot for the 2012 Olympics, which was awarded to Oliveira/Barbachan. Decnop comes from a match racing background and hooked up with Swan earlier this year.

Swan commented, “This is our first World Championship together. To compete at this level requires perfection both physically and mentally, with both as important as the other.” Both of them are soldiers in the Brazilian Navy, so intense physical training is nothing new.

Evaluating the competition in the fleet, Swan continued, “The French and New Zealanders are currently among the most successful on the 470 circuit. But I can say that our real challenge comes from ourselves, as we are still growing as a team.”

A busy day of racing on Thursday 8 August, with three races for each fleet and racing scheduled to start at 1300 hours. The 470 Men and Women gold fleets are on course area bravo, and all other fleets on course area alpha. The forecast is for stronger winds.