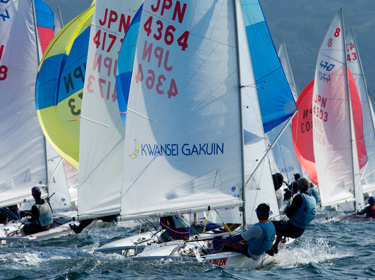 The annual Enoshima Olympic Week took place from 16-17 October 2010, in Enoshima, Japan. Raced in primarily light conditions and overcast, the winds were good enough to deliver a 9-race series.

Demonstrating the depth of 470 sailing in Asia, the 470 fleet was the largest of the Olympic Classes with 32 boats competing. 18 boats competed in the Laser and Laser Radial fleets, with 6 boats in the 49er fleet.

The 470's competed in a mixed fleet, with six teams challenging for the women's title. First overall were Abe Yukihisa and Morita Einosukie from the Yamaguchi Sailing Federation who sailed a consistent series. "It is my first win at a 470 regatta and I'm very pleased. We have more regattas next month and I have more confidence now with my new crew" said Yukihisa. A great result for this pair who are ranked 153 in the world and beat Ryunosuke Harada and Yuugo Yoshida, the 2009 470 World Championship bronze medallists and top placed at # 15 of the sixteen Japanese teams on the 470 men ISAF World Sailing rankings, moved up to third after a good final day, but could not pass Tetsuya Matsunaga and KIMIHIKO Imamura who held on to second overall. Matsunaga and Imamura hold an ISAF Sailing World Ranking of 41.

Fourth overall, and the first of the women's teams were the well known pairing of Ai Kondo and Wakako Tabata. Ranked at # 9 in the world, 2010 has been a good year, which from a World Cup perspective was wrapped up with a win at the Skandia Sail for Gold Regatta, the final event of the 2009-2010 ISAF Sailing World Cup. They finished the 2009-2010 World Cup series at number four.