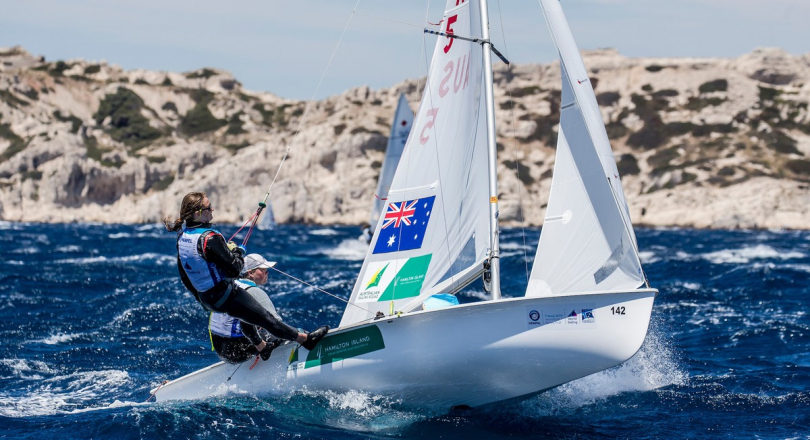 JERWOOD AND DE VRIES SECURE THEIR TICKETS TO TOKYO

470 Women sailors Nia Jerwood and Monique de Vries have been officially announced as part of the Australian Sailing Team for Tokyo 2020.

Nia Jerwood and Monique de Vries have waited a lifetime to get the call to tell them they were going to the Olympic Games.

After breakout international performances in August 2019, they presumed that call was not too far off. However 2020 did not go as planned for the Perth-based duo, with COVID-19 and the postponement of the Tokyo Olympics giving them cause to wonder if it would come at all.

So when the call came through earlier this month from Australian Sailing Director - Tokyo 2020 Olympic Campaign, Iain Murray, to tell them they were Australia's Women's 470 selection for this year's games it was a "mix of relief and jubilation" according to Jerwood.

"We knew we were a good chance of selection after our performance at the World Cup event in 2019," Jerwood said. "With everything that has happened since that time, it has been an absolute rollercoaster of emotion to now arrive here."

The team were on an upward trajectory in 2019 when they won a silver medal at the Hempel World Cup Series on the Olympic racetrack in Enoshima and posted a top-ten finish at the World Championships. Those performances saw the pair awarded the 2019 Australian Sailing Female Sailor of the Year Award, and they appeared destined for even better things in 2020.

"Nia and Monique have proven themselves to be one of the best Women's 470 teams in the world," he said. "They teamed up for this Olympic cycle which started with a win at the Women's 420 Worlds and a second at the Junior 470 Worlds in 2017 and culminated in their World Cup performance in 2019. They will be ready for the games come this July."

The selection fulfils a lifelong dream for the team from Fremantle Sailing Club. For Jerwood, it was a visit from 2008 Women's 470 Olympic gold medal winning pair Elise Rechichi and Tessa Parkinson that set her on the pathway to today's announcement.

"I was ten years old sailing the optimist when Elise and Tessa came back from Beijing with gold," Jerwood said. "They came to visit our club and it was the first time I really knew that going to the Olympics was what I wanted to do. I remember asking them to sign posters for me which I hung on my wall."

"Congratulations to Monique and Nia for earning selection to the Australian Team for Tokyo," Mr Chesterman said. "They have shown incredible resilience to stay focused on their Olympic dream over the last 12 months.

"They are part of a very strong sailing team working hard for success in Tokyo. Sailing has a rich Olympic history in sailing and Nia and Monique and Nia should be proud that so much hard work over many years will see them sailing for their country in Tokyo."

The team have spent the extra year fine-tuning their racing speed under some of the world's finest 470 minds.

"When we are in Perth we train under Sydney Olympic gold medalist Belinda Stowell, when overseas we are with Ruslana Taran (three-time Olympic medalist) and in Sydney we train under Victor Kovalenko (six-time Olympic 470 gold medal winning coach) and alongside Mat Belcher and Will Ryan (Rio 2016 silver medalists)," said de Vries. "There are countless Olympic medals and World Championships between them, and we consider ourselves to be the luckiest 470 team in the world."

Australian Sailing President, Daniel Belcher, commended the young pair on what they have achieved.

"Nia and Monique have come so far and thoroughly deserve their spot on the Australian Olympic Team," said Belcher. "We look forward to seeing what we know they can achieve when they get to the start line in Enoshima this July."

The Opening Ceremony of the Tokyo 2020 Olympics is scheduled for Friday 23 July, with sailing to commence on Sunday 25 July.

Australian Sailing acknowledges the contribution made by those who contributed to Nia and Monique's development, including friends, family, the Fremantle Sailing Club and the Western Australian Institute of Sport.