Japan's Saki Goto and Hiromi Nishiyama had a day that you could only dream about as they notched up three race wins out of four races - hat trick and some. 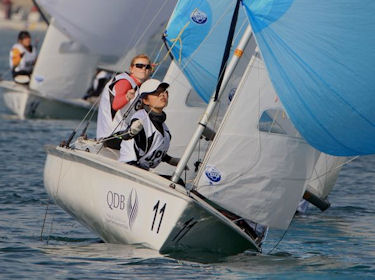 On arrival at the venue, the Doha Sailing Club, there was barely a flutter from the flags, but as the women's fleet headed out to the race track the breeze filled in a bit.

In a day of predicted light winds and hot sun, the women's fleet were sent out early to make the most of the day and aim to catch up on their racing schedule, having only completed one race on Friday.

After a close start, and no distinct leader in the first leg of race 2, the Japanese initiated their game plan, went to the right of the course down to the downwind gate and were off into the lead. Not for long though, as Germany's Annika Bochmann and Anika Lorenz upped their game and overtook for parts of the race in what became a swapping match for the lead. Closing up behind were the second Japanese team of  Erika Tokushige and Mayo Yasuda (JPN), who whilst they couldn't catch their team mates Saki and Hiromi, managed to overtake the Germans and finish the race in second place finish with the Germans third.

After a postponement, when the women's fleet temporarily came ashore to wait for wind, it was soon back out onto the race course for race 3 and this time it was another German team of Victoria Jurczok and Josephine Bach who took an early lead, followed by Malaysia's Khairunnisa Mohd Afenday and Ameira Ila Zulkifli. Going into the second leg and out to the wing mark there was some shifting of positions and it soon became a three-boat German race at the front of the pack, but with Jurczok and Bach ahead and extending their lead.

As the competitors endeavoured to seek out any sniff of wind, the advantages were to those who either correctly predicted the pressure around the course or just took a chance. A team to gain were Polish twins, Madeleine and Nadia Zielinska who secured an advantage which they managed to convert into a third place result, having been back in ninth earlier in the race. Ahead of them, Jurczok and Bach controlled the whole race and crossed the line ahead of the Japanese who took second.

Straight into race 4, and after a general recall (when the race was re-started because many boats were over the line), the consequence was the application of the “black flag” rule which means any boats over the line within the final minute of the starting sequence will receive a penalty score – a big risk to take. And so it proved for four teams, who jeopardized their race and it was penalty points for Annika Bochmann/Annika Lorenz (GER), Anna Kyselova/Liubov Chunikhovska (UKR), Marlene Trommer/Lorena Abicht (GER) and Anna Pirgova/Irina Erokhina (RUS). With the discard coming into play after this race 4, whilst the points are still on their scorecards, at least they don't count them for the time being.

Victoria Jurczok and Josephine Bach (GER) put in a great performance in this race to work their way from halfway down the fleet to second place. However, it was Japan's Saki Goto and Hiromi Nishiyama who yet again dominated, only once finding themselves back in third place, although they only just took the finishing gun by 3 seconds over the German team. Coming in third were Karoline Pepin and Sabine Becke (GER).

At this point, after four races, Saki Goto and Hiromi Nishiyama (JPN) still held the overall series lead, although only marginally as their win was only secured on countback over Victoria Jurczok and Josephine Bach (GER). Race 5 was set to determine the overall frontrunner from these two teams.

And not surprisingly, race 5 saw another domination from the Japanese who just relished today's light wind conditions. Victoria Jurczok and Josephine Bach (GER) yet again took an early lead in race 5 with a significant margin over the rest of the fleet, but they just couldn't retain it. Some resourceful sailing from the Japanese saw the lead swap as the Japanese found half a knot more boat speed and drove their boat down the right hand side of the track. The rest of the fleet would have loved some Japanese intuition but could only look on as they extended to take the gun, a third race win from the day's four races and finish the race with massive smiles on their faces.

Securing their best result of the Championships so far, and most probably their best result at an international event this season, were the Zielinska sisters who finished second and with it moved up to fourth overall, from fourteenth after the first day of racing. Jurczok and Bach (GER) finished third, and after five races in the series sit just two points behind the Japanese.

There was no racing for the men's fleet today, so they found themselves crowded round the screen in the Doha Sailing Club watching the live tracking from the women's racing.