The opening day of the battle for 2011 470 World Championship supremacy in the women’s 470 event started today and was marked by strong winds, heavy rain and lightning. 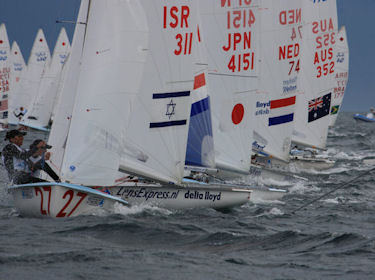 The elements played havoc with the forecast weather, but didn’t distract Japan’s Ai Kondo/Wakako Tabata who posted a 3, 1 to take an early lead.

The 47 boat fleet includes all but one of the top 30 world ranked Women’s 470 teams, setting an incredibly high level of competition as demonstrated by today’s close racing and position changes.

Penny Clark/Katrina Hughes (GBR) set the pace in race 1, leading from start to finish, and crossed the line with an 80 second margin, to post an impressive winning delta. Finishing just behind them in second place were the World #28 Russian pairing, Natalia Ivanova/Diana Krutskikh, who went onto post a 15 in race 2 and end day 1 in ninth overall.

“It was a really good day,” said 22-year-old Hughes, who is in third overall after both races. “In the first race we didn’t get cleanly off the start, but managed to get out on to the right shifts, got the right side, got in at the windward mark, had the perfect first downwind and that was it after that.”

From one British team giving it their all, to what could be perceived as a more relaxed affair for Hannah Mills/Saskia Clark, the team already selected to represent Great Britain at the 2012 Olympic Games. Mills/Clark posted a 10, 6 to finish behind their team mates and sit in 8th after the two races.

“We were really pleased with today,” said Mills. “We had some horrendous windward mark roundings today, especially in the first race – it was a lot easier counting the boats behind us at that point!”

Mills admits that their 2012 selection has affected their approach to these World Championships, but was insistent that they still want to make their mark in the fleet at this Championship. “If we hadn’t been selected then this would have been another peak event for us this year, but instead we’ve managed to get in a bit of downtime before properly building up for the Olympics next year.”

Defending World Champions, Lisa Westerhof/Lobke Berkhout (NED), posted a 4, 2 scoreline to position themselves just behind Kondo/Tabata in second overall. 2010 marked the Dutch team’s second World Championship gold medal, following on from a 2009 victory and predictably the pair are aiming to make it a hat trick in 2011. Catching up with Westerhof after racing, she said, “It was tough today, but we are pleased with our position.”

Not quite what was planned for the world #1 ranked team of Erin Maxwell/Isabelle Kinsolving (USA) who posted a 28, 28 to end the day in 27th overall. With USA Olympic selection hanging off this Championship and needing to finish ahead of their rivals Amanda Clark/Sarah Lihan to be on the Olympic startline next year, today was not the best of days for them. Said Maxwell, “We had a tough day: we were not the fastest boat on the racecourse, and we had lots of little things go wrong. It's a long regatta with lots of racing left, and time for us to move up the scoreboard! “

2011 470 European Champions and world ranked #12 team, Spain’s Tara Pacheco/Berta Betanzos, are in sixth overall after a 8, 7 result. Not bad for this team who are still relative newcomers to the senior fleet, at 23 years old.

The diversity of the fleet is amazing, helms range from the youngest at 21 years to the oldest at 36 years old – but no divulging who is who, suffice to say that the years of wisdom are within the top three teams.

One of the younger helms is Brazil’s world #11 Martine Grael, daughter of the legendary Torben Grael, who is campaigning with 2008 Olympic bronze medal crew Isabel Swan. Martine, who already has a pedigree of a gold medal in the 420 event at the 2009 ISAF Youth Sailing World Championships, commented that her father’s top tips had just been, “to do her best and enjoy the event.” Looking relaxed after racing today, Grael said that she was happy with her day which positions them in seventh overall. Grael paired up with the 2008 Olympic bronze medal 470 crew, Swan, around two years ago and this is their second World Championship together. Martine admitted, "There is some pressure, other people saying ‘you’re Torben’s daughter’. But I have to forget about it.”

Another ISAF Youth Worlds protégé competing at the Worlds is Lara Vadlau from Austria. Vadlau won a gold medal at the 2011 ISAF Youth Sailing World Championships, which had been preceded with a gold medal at the same event in 2010. A youngster in this vastly experienced fleet, Vadlau with crew Eva-Maria Schmiak, posted a 17, 40 scoreline today to place 28th overall.

What to make of today’s delivery from Elise Rechichi/Belinda Stowell is anyone’s guess? Stowell is a two-time silver medallist at the 470 World Championships in 2001 and 2000, and a silver medallist from the 2000 Olympic Games. Rechichi is the reigning Olympic Champion and 2008 470 World Championship bronze medallist. But despite their inspiring pedigree, Rechichi/Stowell still only managed to post a 23, 28 to put them well back in the last 25% of the fleet – a surprising outcome for day one.

28 nations are represented in the forty-seven boat fleet competing here in Perth. The biggest teams are from Australia and China who are fielding four 470 Women’s teams each. So far it is advantage China who average higher overall placings than France.

Fourteen places of the twenty allocated to the women’s 470 event at the 2012 Olympic Saling Competition will be determined here in Perth. With twenty three nations represented amongst the world’s top forty ranked 470 teams, the quality of the competition is deep and tough and there will be disappointment come the end of the Perth 2011 ISAF Sailing World Championships for some teams who fail to make the grade. The final opportunity for qualification will be the 2012 470 World Championships in Barcelona, Spain, 10-19 May 2012, where the final 5 slots will be confirmed.

Racing continues on Tuesday 13 December for races 3 and 4 which are scheduled to get underway at 1430 hours.