The first international sailors have arrived in Fremantle to train on local waters ahead of the Perth 2011 ISAF Sailing World Championships. 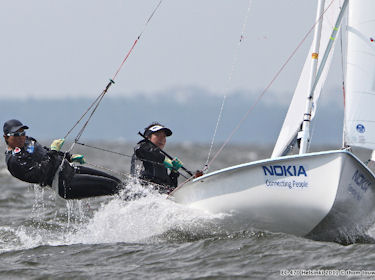 The two leading Japanese 470 teams have been training in Perth since Friday 23 September in a variety of conditions from their base at the Fremantle Sailing Club. Skipper Ai Kondo and her crew Wakako Tabata will start the women’s 470 event in Perth on a high after winning the gold medal from 22 boats in the London Olympic Sailing Test event at Weymouth in July. The pair also won their class at the Asian Games in China last year.

Both crews are practising under the keen eye of Japan’s head sailing coach, Kazunori Komatsu, who sailed in four Olympic Games in Solings and 470s. He last visited Fremantle in 1997 when he took part in that year’s Whitbread around-the-world yacht race.

Twelve hundred of the world’s top Olympic class sailors and 850 boats from 80 nations will contest the Perth 2011 ISAF Sailing World Championships between 3-18 December,

The two Japanese crews will train off Fremantle until they return to Japan on 8 October to compete in a local regatta and then take part in the Sail Melbourne regatta in November.

The 470 athletes will put their boats on the train to cross the Nullabor to Melbourne - a 7,000 kilometre round journey. Many other international sailors arriving in Perth over the next two months will also be travelling to Melbourne for final top-class competition ahead of the World Chjampionships.