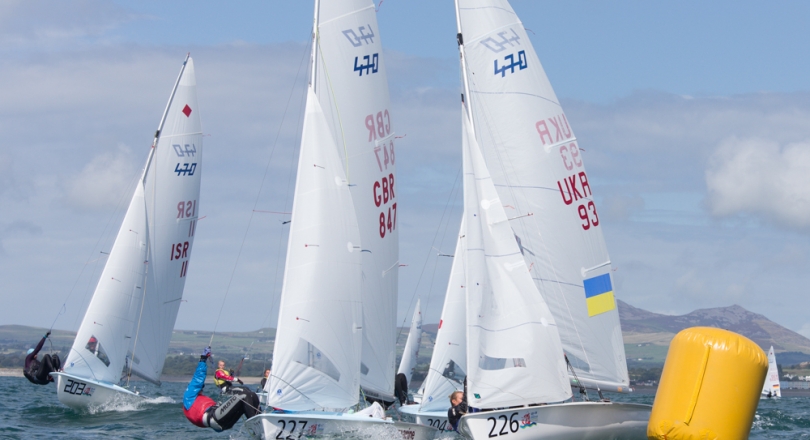 In complete contrast from yesterday’s blow out, perfect conditions for racing at the 420 and 470 Junior European Championships out in Cardigan Bay, with sun, breeze and a light chop.

Across the two Championships, only Poland’s Ewa Romaniuk/Katarzyna Goralska have managed to hold onto their yellow leader bibs in the 420 fleet, with all change in the 470 as Anna Kyselova/Anastasiya Krasko, the 470 Junior World bronze medallists, take over the lead in the women and in the 470 Men Italy’s Matteo Capurrro/Matteo Puppo also advance to the front of the fleet.

470 Junior European Championships
At the 470 Junior Worlds in La Rochelle, the Ukraine’s Anna Kyselova/Anastasiya Krasko racked up three successive race wins to propel them up into medal contention, in what was a career best performance. Today the pair set out on a similar path securing their first pair of race wins.

“The first race was not easy, because at the first mark we were second and then downwind we had to work really hard to get into first as we are a bit lighter than other teams,” said Krasko. “From then, we just kept our position to the finish. The second race was a bit easier – it was a nice day.”

Most of the top teams from the 470 Junior Worlds are racing here in Pwllheli and will be in hot pursuit of the Ukrainian pair. Amongst those disappointed in France were Joanna Freeman/Katie Tomsett (GBR) and Barbara Cornudella Ravetllat/Sara Lopez Ravetllat (ESP), who both ended the Junior Worlds tied on 79 points, just 2 points off the podium. 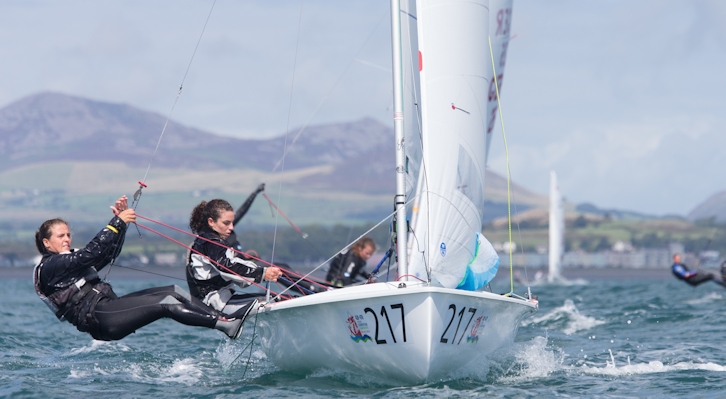 The Spanish team are determined to revive their medal hopes at the Junior Europeans, as Lopez Ravetllat explained. “In France we were really irregular; in one race we did bad and in the other good. Normally in Championships we get better as we go, and that happened in France.”

Commenting on today’s race performance, she continued, “France was a bit better than here as it was less windy and today it was a bit much for us, 15 knots more or less. It is a bit cold here, but the wind is good and it is not too complicated. Today there was a really high level and all the English teams know well the conditions. We have to look what they do and keep learning. We will do what we can and the goal is to get to the podium.”

The reason for their success is their commitment to training combined with University studies, as Barbara laughed, “We train, study, train, study and nothing more! In the morning we study during the week and we train three evenings during the week and all weekend.” They are based in Barcelona and train with the Charles brothers and the recently crowned 470 Junior World Champions, Jordi Xammar/Joan Herp.

Joanna Freeman/Katie Tomsett (GBR) drop from 1st to 2nd , and a 3, 2 scorecard has propelled Amy Seabright/Anna Carpenter (GBR) into third overall, up from 9th as they fight back from their race 1 disqualification.

The 470 Men series leaders going into the day, David Charles/Alex Charles (ESP), could not repeat their opening performance and shot out of the lead after a high scoring set of double-digit finishes, leaving them little margin for error in the next 6 races.

The race track today belonged to Italy’s Matteo Capurro/Matteo Puppo who charged up the leaderboard from their 3, 5 scorecard to take a 1 point leader’s advantage into tomorrow’s racing. The Italians and Israel’s Gal Cohen/Dan Froyliche are the only teams with all top-5 finishes, which positions them well at this early stage in the Championship. 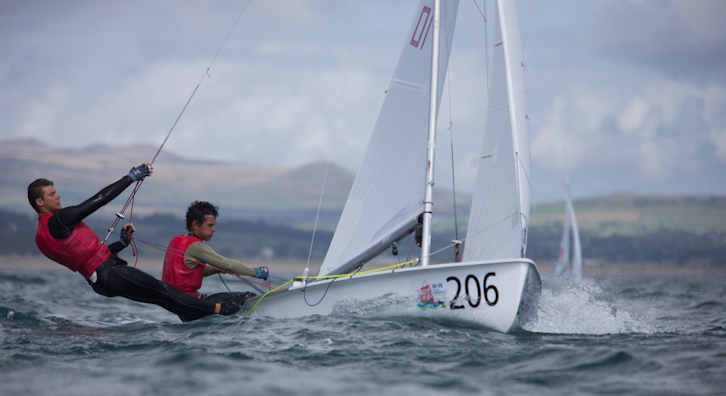 “It is a very good start and we hope to continue in this line for the rest of the Championship,” said Puppo.

The pair shouldered the weight of being the series leaders going into the closing day of the final series at the Junior Worlds, which unsettled the team as Puppo reflected, “On the first day of the Junior Worlds we did really well and then we fell down in the last days, which I think was the pressure of being the series leaders. We lost everything in the last day of the finals.” A turnaround looks to be on the cards after the pair have had time to reassess their game plan, “We have tried to change the head to confront the races,” Puppo concluded.

Mike Wood/Hugh Brayshaw (GBR) raced a 2,1 to move up into second, with Israel’s Gal Cohen/Dan Froyliche briefly taking the overall lead after race 3, before ending their day in third.

The 470 Men and Women are sailing an opening series of 10 races, after which the top 8 teams in each fleet will advance to Thursday’s medal race. Two races are scheduled for Monday 19 August with the first start for the 470 men at 1300, followed by the women.

Two more races for the yellow and blue fleets, who were re-seeded for today’s racing based on their leaderboard positions from day 1 of racing. Different winners in each race goes to show the depth of talent in this fleet, with teams pushing all the time and pouncing on every advantage around the track. Make a mistake and you plummet down the pack and it is a tough road to regain valuable points. 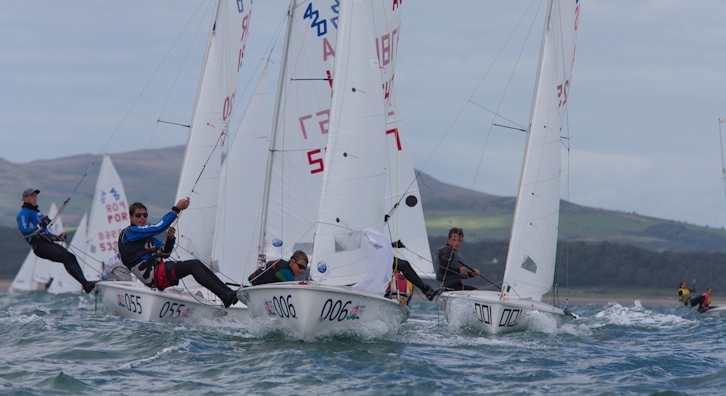 The girls’ teams still dominate in the top 5 of the fleet, with Poland’s Ewa Romaniuk/Katarzyna Goralska continuing to hold the overall lead after another stunning pair of 2,1 scores to retain the yellow leader vests for tomorrow. The Polish 420 team all raced at the front of the yellow fleet today, with teammates Kamil Cesarski/Benjamin Waszkiewicz claiming the win in the first race of the day.

But it was a day of extremes for Cesarski/Waszkiewicz, as they went from a race win to finishing virtually at the back of the pack in 42nd, and their smooth moves in race 3 only managed to accelerate them up the leaderboard from 49th going into the day to 46th by the end. In a demonstration of strength, it was almost a Polish 1,2,3 procession across the race 3 finish line with Romaniuk/Goralska crossing in second and Tomasz Wawerek/Antoni Banas only losing their third place in the fleet after mark three.

Commenting on the current success of their teammates Romaniuk/ Goralsk, he added, “I am proud of them and we are all happy to be sailing so well.”

Portugal’s Diogo Pereira/Pedro Cruz move up one place to second overall, as do France’s Marie Soler/Laura Pebrier who move up to third, with space being made by the ISAF Youth Worlds bronze medallists Ilaria Paternoster/Benedetta di Salle of Italy who drop from 3rd to 9th.

Spain’s National 420 Champions Silvia Mas/Nuria Miro sailed a solid 4, 7 to end their day in fourth overall, as they focus on making amends for what they declared a disappointing performance at the 420 Worlds last month.

“Yes, we were really tired and we don’t know what happened in Valencia,” explained Mas. “But now we come with another mentality and this is another Championship and it is a new world.” The success of the girls is not going unnoticed here, “I think the girls this year are really, really good at sailing,” Mas added.

There is evident focus on the top placed British team of Scott Wallis/Josh Voller who are aiming to finish as the first British pair and be in the mix for a top ten finish overall, particularly after they won the silver medal at the British 420 Nationals last week. 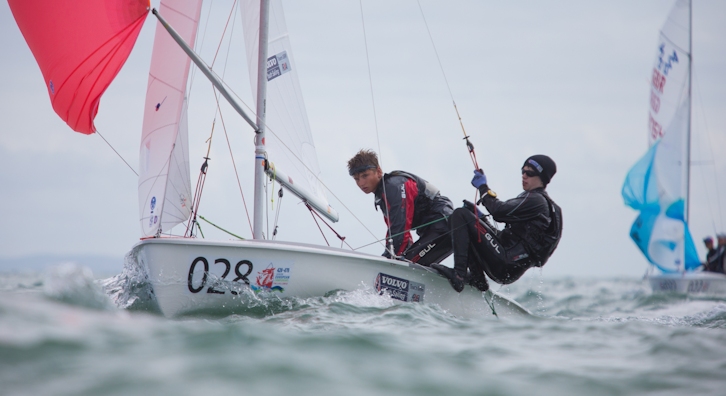 “It definitely helps a little bit,” said Voller on their familiarity with the sailing area. “We know in certain wind directions it is going to be wavier or flatter, like in the morning. When we are out on the water it helps and we know which side is going to pay at the top, if there is a little headland or something. Other than that everyone is fairly even.”

With a few girls teams higher up the leaderboard, Voller said, “I guess the slightly lighter air suits them, but it also suits us, so we won’t complain! We want to be the first British boat and hopefully top ten overall.”

Expect some change in the leaderboard tomorrow as the discard kicks in from race 5 and teams discard their worst score, and the gold and silver fleet splits for the final series are set.

Racing is scheduled to start at 1300 hours for the 420 and 470 fleets, and the forecast is for another glorious day of racing with a lighter breeze fluctuating between 9-13 knots.