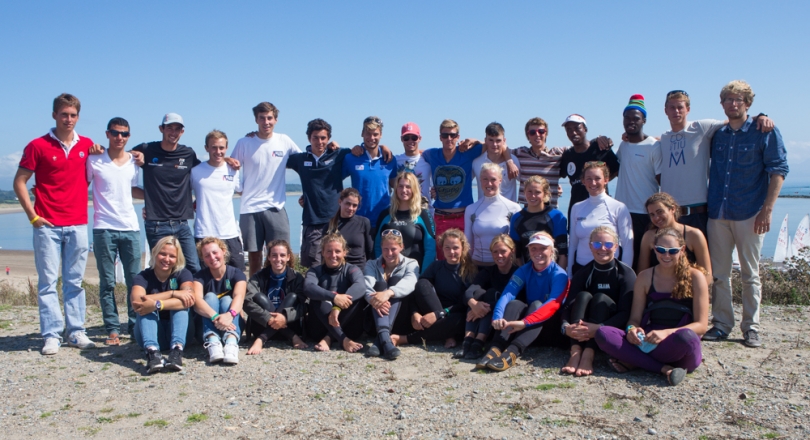 A tense final day waiting game at the 420 and 470 Junior Europeans in Pwllheli, Great Britain as teams waited for the forecast 9 knot breeze to fill in.

But local knowledge, which had predicted no breeze this morning, unfortunately won through, with the Race Committee waiting until the last possible timeframe before abandoning racing at 1530 hours. As the time limit expired, three teams were left celebrating their first major Championship victories, whilst the rest of the leaderboard lamented the chance they never got to improve their positions.

Ilaria Paternoster/Benedetta di Salle of Italy wrapped up the gold medal in the 420 Open Junior European Championships, with Gal Cohen/Dan Froyliche of Israel and Anna Kyselova/Anastasiya Krasko of the Ukraine winning the 470 Men and 470 Women Junior European titles.

Instead of wind, teams enjoyed the best temperatures and blue sky of the entire Championships.

The Medal Ceremony took placed to much whooping and hollering from team mates as the medallists stepped forward to the podium to collect their medals, prizes and Championship trophies.

420 Open Junior Europeans
Ilaria Paternoster/Benedetta di Salle have been notorious in recent years for securing a podium finish at the ISAF Youth Worlds and then moving onto the 420 Class Championships and losing their form. At last year’s 420 Junior Europeans, the pair didn’t event qualify to the gold fleet. There was no evidence of a repeat this year, with the team excelling in the lighter conditions.

They dropped back a bit when the wind increased, but still posted in the top 50% of the fleet in the breezy days, and advanced to the final series in second overall. Two more race wins to open the final series and they were up and going for gold. Teams were in contention for the 420 Ladies Junior European Championship title and the 420 Open Junior European Championship title, with Ilaria Paternoster/Benedetta di Salle doing the double and winning both titles, both sets of medals and both Championship Trophies.

The form card at this year’s Championship definitely favoured the girls’ fleets with women dominating the top three leaderboard positions, and the top 10, for most of the Championship. Only when the breeze got up yesterday did the door open for a boys’ team, Bart Lambriex/Philip Meijer of the Netherlands, to advance to second overall, albeit sandwiched between two girls’ teams, with France’s Marie Soler/Laura Pebrier in third.

Bart Lambriex commented, “The Championship was great for us. We started in 18th position on the first day and during the event and climbed to the top and here we are in second. We had a bit of luck with the weather as the first four days were just perfect conditions, medium breeze and it was fun for us.” 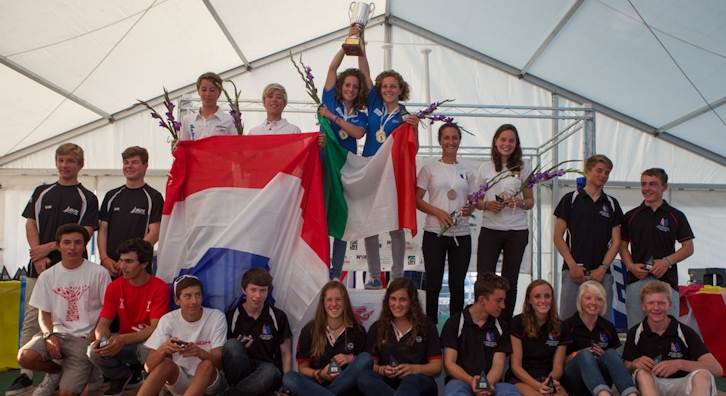 The pair moved to the 420 from successful careers in the Optimist, as Meijer explained, “It feels really good and we didn’t expect to be at the podium so fast, as we have only been in the boat for one year. We are really glad to feel so good with the boat.” 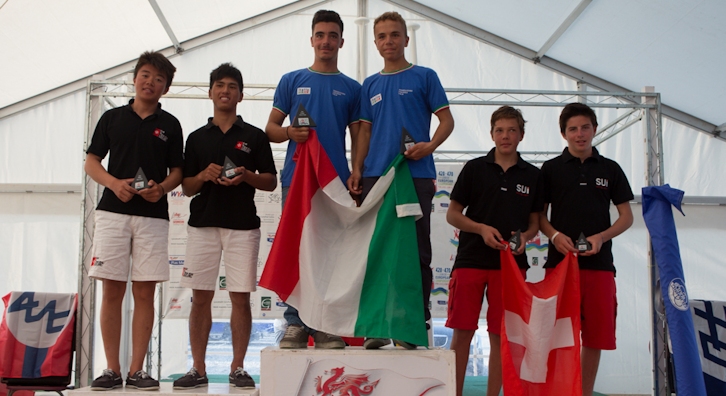 The SailFirst ISAF Youth Worlds 420 boys’ bronze medallists Diogo Pereira/Pedro Cruz (POR) mingled amongst the three in the qualification series, but dropped off in the final series to end their Championship in fourth overall.

Medals were presented to the top three in both fleets, the 420 Ladies and 420 Open, along with the top three teams in the Silver fleet which was won by Matteo Pincherle/Ludovico Basharzad (ITA).

Ninety-six teams competed in the 420 Junior European Championships contesting 10 races, with a qualification and final series.

George Steinthaler/Patrick Christa of Austria were presented with the Caronis Trophy, as the youngest team competing at the 420 Junior European Championships.

470 Junior Europeans
In claiming the gold medals, Gal Cohen/Dan Froyliche (ISR) in the 470 Men and Anna Kyselova/Anastasiya Krasko (UKR) in the 470 Women claim their first major Championships in the 470 Class. Both teams won medals, a bronze to the Israelis and silver to the Ukrainian pair, at the 470 Junior Worlds earlier this month and were intent on upgrading here in Pwllheli.

However, a race was what Kyselova wanted, to reverse yesterday’s capsize ridden scorecard and return to the run of first places the team delivered earlier in the Championship, with 5 wins in a row. “Today we came to the club and saw there was no wind,” she said. “We waited for some hours and it was a bit boring. We really wanted to sail the medal race but it didn’t happen.”

Krasko added, “It is really cool. This is our best ever result so we are happy.” 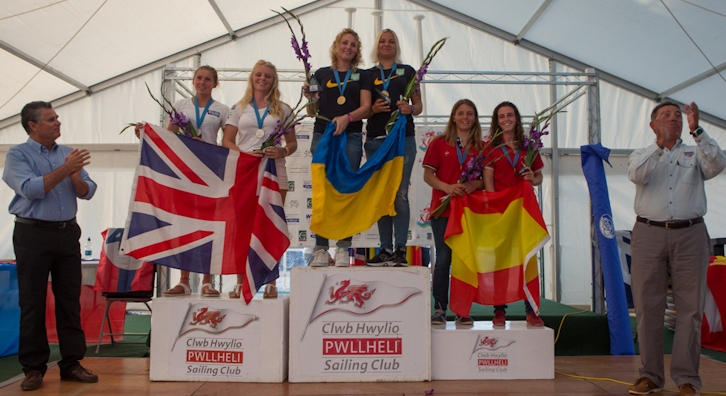 For Froyliche it is only 3 years since he won the 420 Junior European Championship title in 2010, with then crew Yoav Levi. Since pairing up with Cohen in the 470, the team have trained intensively and been justly rewarded this season. 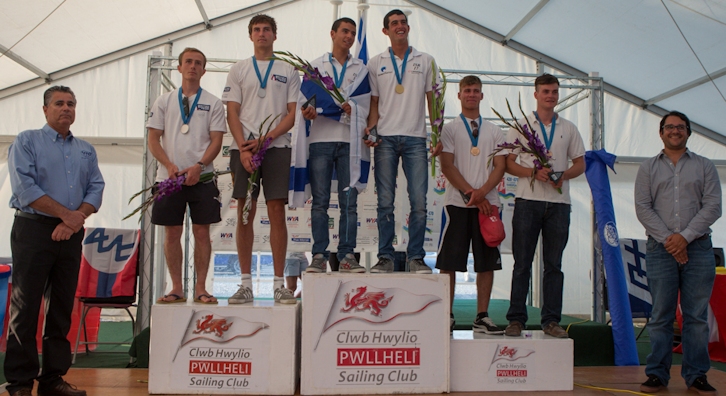 Joining Kyselova/Krasko on the podium were Great Britain’s Joanna Freeman/Katie Tomsett taking the silver medal, up from the bronze they achieved in 2012, with Spain’s Barbara Cornudella Ravetllat/Sara Lopez Ravetlatt in bronze medal position.

All medallists will put 2013 down as their most successful season of racing so far, and expect a lot more to come from all of these junior teams. 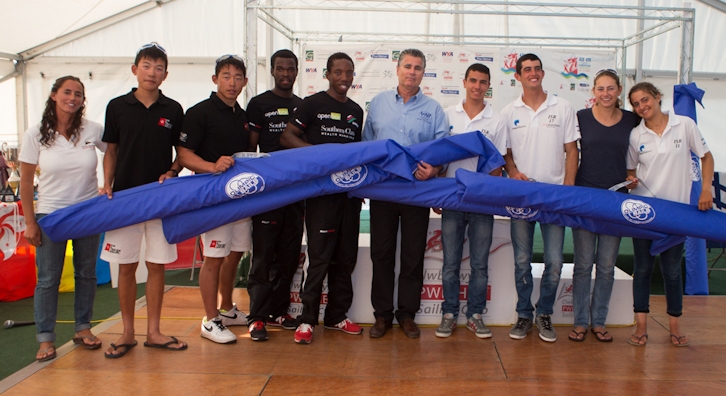 The André Cornu grant, awarded to the winners of the previous year’s ISAF Youth Worlds who then compete at a 470 Junior Championship, was presented to brothers David Charles/Alex Charles who received a cheque for EUR1,000.

One-hundred and thirty six teams from 20 nations competed at the 2013 420 and 470 Junior European Championships hosted at Pwllheli Sailing Club, from 14-22 August 2013.