It all comes down to one regatta for US Sailing Team AlphaGraphics athletes looking to clinch a U.S. Olympic Team spot. 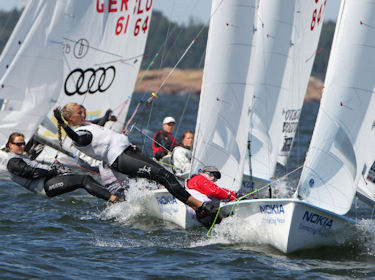 The 2011 Perth ISAF Sailing World Championships, 3-18 December, will serve as the second and final U.S. Olympic Team Selection Event in the nine Olympic fleet racing events. It is also the country qualification regatta where USA will look to secure an Olympic berth in all 10 Olympic events.

“All of the training and preparation done by US Sailing Team AlphaGraphics athletes over the past three and a half years will come together in Perth,” said Olympic Sailing Committee Chairman Dean Brenner. “The Olympic Sailing Committee structured the U.S. Olympic Team selection process to align with our primary mission of fielding a team that gives the U.S. the best possible chances of success at the Games. And international competition at the highest level is what will best prepare America’s athletes for the Olympic Games. At the conclusion of this regatta, America will know 13 of the 16 U.S. Olympic Team members.”

USSTAG athletes will combine their overall score from this regatta with their result from the 2011 Skandia Sail for Gold, although not all USSTAG athletes are competing for an Olympic team spot. The top-performing eligible athlete(s) in each

Olympic fleet racing class will be selected to join the U.S. Olympic Team to compete at the 2012 Olympic Games, scheduled for set for July 27- August 12, 2012 in Weymouth/Portland, England. To see who is leading the results after the Sail for Gold, see the Trials Tracker below (or click on Trials Tracker for details of all athletes across the ten Olympic events):

US Sailing Team AlphaGraphics 470 men and women athletes competing in the ISAF Sailing World Championships are: