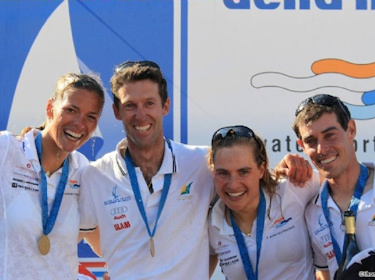 Countdown for Mat Belcher and Malcolm Page (AUS) and Lisa Westerhof and Lobke Berkhout (NED) in the voting for the 2010 ISAF Rolex World Sailor of the Year Awards which ends on Monday 25 October 2010.

Having been announced as nominees for the 2010 ISAF Rolex World Sailor of the Year Awards on 28 September 2010, our outstanding 470 sailors are now counting down to 9 November 2010 when the winners for the male and female awards will be announced.

“Their nominations mark a sensational conclusion to the 2009-2010 Olympic class sailing season”, said Stanislav Kassarov, 470 Class President. “Both 470 teams have displayed enormous talent and ability and it is due credit to the sailors that they have been shortlisted for the prestigious ISAF Rolex World Sailor of the Year Awards.”

The teams have shared some personal stats and facts on their success and sailing background:

What inspired you to take up sailing?
Mat: The dream of competing at the Olympic Games and the challenges that sailing represents.
Malcolm: I come from a non sailing family. It was when my elder brother got involved in sailing that I had my first taste. Once I got over teh first scary experience, I could not get enough and have been sailing ever since.

What was the first boat you ever sailed and how old were you?
Mat: A 10 year old wooden Sabot (similar to an Optimist) tied to the back of my parents boat when I was about 6 or 7 years old.
Malcolm: A wooden Manly Junior, which is a snub nosed three sail training boat from Sydney, a little larger than an Optimist. I was 8 years old.

What was the first event you competed in and in what year?
Mat: A junior handicap race at SYC in 1989
Malcolm: Manly Junior National Championships in January 1983

What are your future sailing goals?
Mat: Winning gold at the 2012 Olympic Games
Malcolm: To be the first Australian sailor to win two Olympic gold medals

Who has had the greatest impact on your sailing and career and why?
Mat: My parents and family have had the biggest impact on my sailing. My junior coach, Mick Ralph, encouraged me to participate in international competitions and coached me to our 420 successes. Over the past 10 years I have been guided and mentored by our coach Victor Kovalenko, both in my sailing career but also personal development.
Malcolm: I have three mentors in my life. My father Don Page, my coach Victor Kovalenko and my current employee Martin Hill. They have all shared experiences and guided me through life, which has enabled me to achieve my goals

Who is your sailing hero?
Mat: I think every young sailor's hero at some point would have to have been Paul Elvstrom. Before I started my 470 career, I really looked up to Tom King (Sydney 2000 gold medallist) and I still do. My biggest sailing heroes are the Australian 470 gold medal teams from Sydney and Beijing Olympics. Seeing how they achieved the ultimate success at the Olympics - this gives confidence in the system that our coach created. To achieve the same in London would be a dream come true.
Malcolm: I think it would have to be Paul Elvstrom. From reading books and hearing about his reputation he seemed such a great competitor, with a record to match.

What other sports do you enjoy?
Mat: Running, golf, windsurfing and surfing
Malcolm: Soccer and watching team sports, especially if Australia is playing

What does being nominated for the ISAF Rolex World Sailor of the Year Awards mean to you and how would you feel if you were voted the winner?
Mat: Being nominated is one of the greatest recognitions you can achieve in our sport. We have had a very successful year this year and it's a rewarding feeling for our dedication and commitment to our sport. It is truly a great honour to be nominated as one of the top sailors and being compared to the many sailing greats past and present. I hope that we can do Australia and my team proud by giving our best for the future and in London 2012. The possibility that our team might be voted as ISAF Rolex World Sailors of the Year - I think I would be speechless.
Malcolm: It would be a complete honour to win this title. Looking at the past winners of the award, they are all legends of my sport. Coming from one of the most competitive and far reaching classes in the world, it is a privilege to be recognized in this way. To be at the top of the 470 class is rewarding and difficult enough, but to be thought of as a potential World Sailor of the Year is humbling. To possibly be the first 470 sailor to win this award is exciting and incredible. I feel responsible for representing my country and class and I hope that I can do them proud.

As an acknowledgement of results where a man goes up to himself!

Read the full report on Mat and Malcolm's achievements during the period of nomination CLICK HERE.

What inspired you to take up sailing?
Lisa: Adventure, competing with and against the elements, training and racing outdoors. It is a complex and demanding sport in many ways.
Lobke: I was raised in a sailing family. My grandfather was already skipper of the 'groene draek', the ship of the royal family. Very young we went with our parents on holidays with our ship. On my 8th birthday I got an Optimist with my brother and together, with all our friends, we started sailing. My family have always been sport freaks. When I was 8, I saw the Olympic Games and saw a Dutch female ice-skater win three gold medals. This is where my Olympic dream began.

What was the first event you competed in and in what year?
Lisa: 1990 - Club Racing, 1991 - French Optimist Nationals, 1992 - Dutch Optimist Circuit, 1993 - European Optimist Championship
Lobke: My first event was the Combi Zuiderzee - a series of regattas during the year on the lakes in Holland. I was 8 years old in 1989. In 1994 I became European Champion in the Optmist

What are your future sailing goals?
Lisa: Perth 2011 ISAF Sailing World Championship and 2012 Olympic Games
Lobke: to win a gold medal at the 2012 Olympic Games. Next to this, it is important to me to get my country or even the World enthusiastic for sailing. Therefore I do a lot of work with children. In October I am going to the India International Regatta to be a role-model for children who are starting to learn to sail.

Who has had the greatest impact on your sailing and career and why?
Lisa: My parents during my Optimist years - weekend after weekend, holiday after holiday, year after year they took me to every race and training. They invested every free minute in me and my brother. From 1998 on my boyfriend Gunnar has always been there for me, to support me but also to give a critical opinion to my desires in life.
Lobke: First of all my parents have invested a lot of time and money in my sailing career. And still they are my biggest fans! Then Marcelien de Koning, my former skipper, and Jacco Koops, my coach, because we have spend so much time together and had so much trust in each other. We had a great Olympic campaign together. Lisa Westerhof, my skipper, who took the challenge to start an Olympic campaign with me beside a busy job as an airline pilot for KLM. She is so devoted to everything she does. She is a real Olympic athlete! Everything she does is lined up for this one and only goal: an Olympic medal. And Dennis van der Laan, my boyfriend but also the manager of our Team Olympiceyecatchers. Together with him I made the decision to continue an Olympic campaign and that has been the best decsion ever! I still enjoy sailing so much and I am really looking forward to the coming two years to the Olympics. Dennis manages our campaign really well. We have so many people following our achievements and being part of our adventures. We have plans to take more than 150 people to London in 2012 to see us live at the Games. This all because of his professional approach.

Who is your sailing hero?
Lisa: Torben Grael and Ben Ainslie
Lobke: Ben Ainslie - he is a legend!

What does being nominated for the ISAF Rolex World Sailor of the Year Awards mean to you and how would you feel if you were voted the winner?
Lobke: It is a great honour to be nominated for this award. Sailing is such a big and diverse sport around the world, it is an honour to be one of those selected who have achieved something extraordinary in our sport. Winning the ISAF Rolex World Sailor of the Year Award would be a true recognition for our achievements all across the world. Taking a look at the winners of this prestigious award, these are all legends in our sport. To become one of them is truely an unthinkable recognition to me!

Read the full report on Lisa and Lobke's achievements during the period of nomination CLICK HERE.

The Voting
The winners will be selected by the ISAF Member National Authorities, the national governing bodies for sailing around the world, who are now invited to vote for the one male and one female sailor who they believe most deserves the Award.

The winners will be announced at the ISAF Rolex World Sailor of the Year Awards presentation and dinner, which will take place on Tuesday 9 November 2010. The venue for the event is the Zappeion in Athens, Greece.