International rock superstars INXS will launch the Perth 2011 Worlds Festival with a one-off show in Fremantle on the first weekend of December. 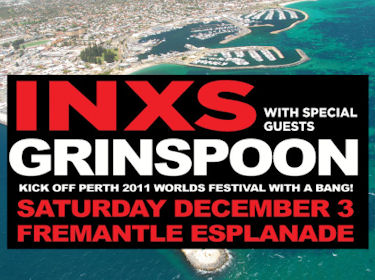 INXS will play the ticketed concert presented by Zaccaria and North Street Productions with Special Guests Grinspoon, on Saturday 3 December in the Perth 2011 Worlds Village on Esplanade Park in Fremantle.

The major festival attraction coincides with the first day of competition in the Perth 2011 Sailing World Championships which has attracted 1200 of the world’s top Olympic class sailors from 80 nations.

The Perth 2011 Worlds Festival, being staged by North Street Productions on behalf of Perth 2011, is a 16-day celebration built around the theme of “where land meets the sea” and will run parallel to the Sailing World Championships, the biggest international sailing event of the year.

The festival will showcase Western Australia’s culture and lifestyle, the State’s continuing connection to its magnificent coastline and its affinity with sailing and the sea.

Perth 2011 Event Director John Longley said it will provide a thrilling start to the Worlds Festival.

“The programme being planned for the Worlds Festival by North Street Productions is genuinely exciting and to have INXS kick things off on the first Saturday is tremendous,” Longley said.

“There will be something for everyone and for the 16 days of the World Championships, the atmosphere in Fremantle is set to be truly special.”