Hot To Trot In Istanbul 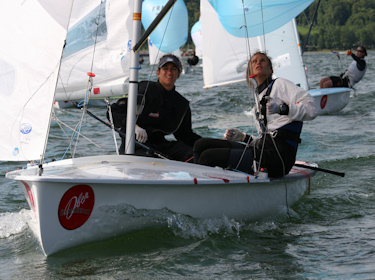 The tension is increasing and the temperature is going up in Istanbul, on the eve of the 2010 Open 470 European Championships.

Defending women’s European Championships Giulia Conti and Giovanna Micol are enjoying the Mediterranean climate after some colder regattas in the north of Europe this summer. “Finally some good weather!” said Conti, from Lake Garda. “After racing in Holland and England it is nice to be out on the water sailing in lycra. When a wave hits you, instead of ‘Oooh!’, now we say ‘Aaaah...’.

The Italian girls are also excited to be visiting Istanbul for the first time, a huge, ancient city bustling with more than 12 million people, and enormous mosques providing the most dramatic of backdrops to the racing area just off the shore of Fenerbahce. “It is a beautiful city,” said Micol, “and I hope we find time to visit some of the monuments. But first, we are here to race.”

The Italians have been one of the most performers of the past two seasons, winning last year’s Europeans and finishing third in the windy and wavy 470 Worlds in Holland earlier this summer. Skandia Sail for Gold Regatta in Weymouth didn’t go so well, however, with Micol laid low with a sickness, so they are looking to round off the 2010 season on a more positive note.

Of the total 92 entries, 35 of those are women, so the men will race in two qualifying groups and the women in one fleet. Today’s practice race took place in beautiful conditions, 15 to 18 knots of warm wind gusting off the city, with some 10 to 20 degree wind shifts just to stop the leaders getting too comfortable. The Italian girls were one of about 30 teams to take part, while the majority stayed ashore either relaxing around the plush grounds of Istanbul Sailing Club or sweating over some last-minute measurement issues.

Danish sailors Henriette Koch and Lene Sommer got through measurement OK, but were glad to have done the practice race because they discovered the spinnaker halyard had become inexplicably jammed. Down with the mast and some last-minute re-running of the halyards to make sure everything’s running smoothly for tomorrow’s first two races. “We’ve travelled more than 2000km to be here, so it would be a bit silly to let ourselves down with a jammed spinnaker halyard,” said Koch. “Today’s race was very interesting, even if everyone started 20 seconds too early off the line like they always do in practices. The wind shifts can be quite big, so it might be easier to work out what’s going on in the race with the online tracking than it will be on the water. My parents will be online back in Denmark watching us go around the course.”

Ian Dobson is one of a large British contingent competing in the regatta. Sailing with helmsman Matt Mee, the young Brits have been coming on in leaps and bounds this season, finishing 25th at the Worlds and 14th in Weymouth. “If we can get into the gold fleet and move forward from there, we’ll be happy,” said Dobson. “The sailing conditions here are fantastic, rash vest and board shorts and you’re ready to go. Happy days.”

The regatta was officially declared open this evening at the opening ceremony. President of Istanbul Sailing Club, Dr Sehyun Binzet, looked forward to hosting one of the highest quality racing fleets in the World. “It will be great for our young sailors in Turkey to see such great sailors competing, and also I hope that the international sailors will really enjoy the wonderful sailing conditions and the great facilities we have for running regattas such as this.”

Racing starts with the qualification series at 1300 hours (local time) on 31 August and the regatta concludes with the Medal Race on 6 September. The 2010 Open 470 European Championships is organised by The Istanbul Sailing Club in co-operation with the International 470 Class Association and the Turkish Sailing Federation.

Racing will be tracked through www.onlineracetrack.net