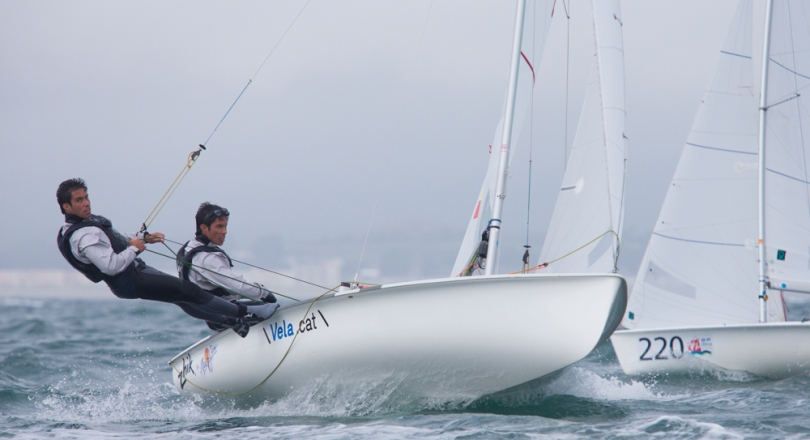 A breezy day of racing at the 420 and 470 Junior European Championships, with some particularly high scorelines for the series leaders in the 420 fleet as the lighter teams were knocked off form in the combination of strong wind and waves.

Racing got underway in a breeze of around 14 knots, but the combination of waves and gusts up to 24 knots, proved a challenge for many with plenty of capsize action all over the 420 and 470 race tracks. 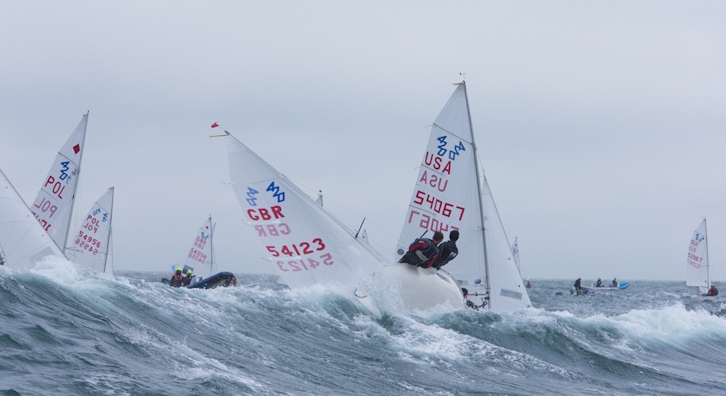 Surf is up © Alan Dop Photography

In the 470 women, despite a capsize in each of today’s races for Anna Kyselova/Anastasiya Krasko (UKR) and notching up their worst day of racing in the series, the team had amassed such a massive points margin that they easily remain at the top of the leaderboard. Over in the 470 Men, Israel’s Gal Cohen/Dan Froyliche have taken the Championship lead and will wear the yellow leaders bibs for the first time as they go into the Medal Race with a 3 point advantage.

The forecast is for a light 6 knot breeze from the south-west tomorrow, from midday onwards. The 420 fleet are scheduled to race their final two races, with the 470 Men and Women fleets each advancing to the eight-boat Medal Race.

470 Junior Europeans
Disaster in the 470 Men’s fleet for Italy’s Matteo Capurro/Matteo Puppo in the first downwind leg of race 9. As they surfed through the waves, their mast failed and launched the team into an inevitable capsize, to score them two penalty scores from a ‘did not finish’, followed up with a ‘did not start’ for race 10. A painful nose-dive from Championship leaders to just scrape through into the medal race top 8, but their replacement mast has been measured in and they are ready to hit the Medal Race track tomorrow.

The Italians’ downfall played into the hands of Israel’s Gal Cohen/Dan Froyliche, who scored a 5,8 and go into the medal race assured of a podium finish. They carry a 3 point advantage over Great Britain’s Mike Wood/Hugh Brayshaw, who delivered a perfect performance today and won both races. 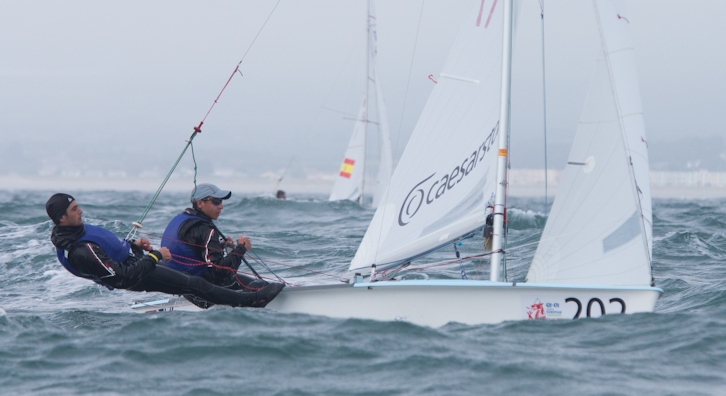 Cohen/Froyliche will be competing in only their second medal race, the first being at the Junior Worlds. “It is like going into a new day,” said Froyliche, “when you have the advantage over everybody, and that is the way we need to see it and sail like always.”

Cohen added, “It will be hard tomorrow and there will be pressure, but I like it. It is OK.”

Germany’s Julian Autenrieth/Adrian Hoesch took two second places behind the British to consolidate their position and go into the medal race in third. Autenrieth claimed the 470 Junior Worlds silver medal earlier this month with a different crew, just ahead of Cohen/Froyliche who secured bronze. 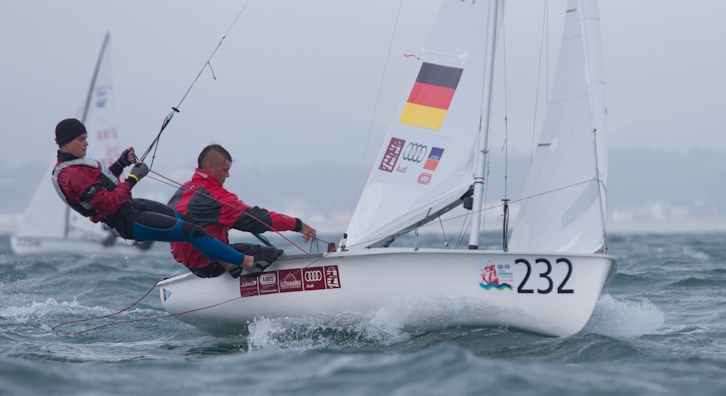 Spain’s Junior World Champions, Jordi Xammar/Joan Herp pull the punches when they need to and today geared up to fourth overall and positioned themselves in with a shot at the silver and bronze medals. Their gold medal victory a couple of weeks ago seems to have only served to keep their feet even more firmly on the ground, as Herp explained, “Jordi is a lover of motorbikes, and in the motorbike world there are three steps of competition; motor 3, motor 2 and motor GP. There are many riders who win the World Championship of motor 3 and then they think they will arrive to motor GP and win five World Championships, but they actually don’t even qualify. It is important to know you are not bad, but you need to keep improving like everybody to be at the front.”

Xammar added, “We did a Junior World Championship, we won it. We had good days, but the thing is at the 470 Worlds we only qualified to the silver fleet, whilst good junior sailors were finishing in the gold fleet top 15 - but we didn’t. The 470 is not an easy class. We can’t start thinking we are the World Champions and lose focus.”

A rewarding climax to a first year of international competition for South Africa’s Sibu Sizatu, who competes in his first Medal Race tomorrow.

Whilst the leaderboard has shuffled, the same top eight teams who started the day end it and advance to tomorrow’s Medal Race, which is scheduled to get underway at 1345 hours.

True to form, the Ukraine’s Anna Kyselova/Anastasiya Krasko were leading both races today, but in a change to form they capsized in each in what will go down as their worst day of racing. 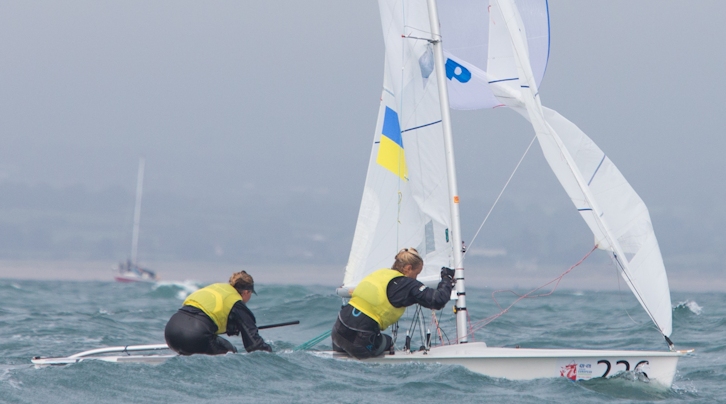 A downcast Kyselova said, “We did really big mistakes today. Both times we were leading and both times we capsized in each downwind. I don’t know what happened as we don’t usually capsize. We just did some mistakes and I don’t have words, I am so upset.”

Whilst their 16 point advantage going into the day has been eroded, they are still guaranteed to stand on the podium after tomorrow’s Medal Race. The Ukrainian pair badly want the gold medal, so expect a highly fought battle on the race track tomorrow, with just two other teams able to halt their quest. Their rivals are Great Britain’s Joanna Freeman/Katie Tomsett and Spain’s cousin combination of Barbara Cornudella Ravetllat/Sara Lopez Ravetlatt. 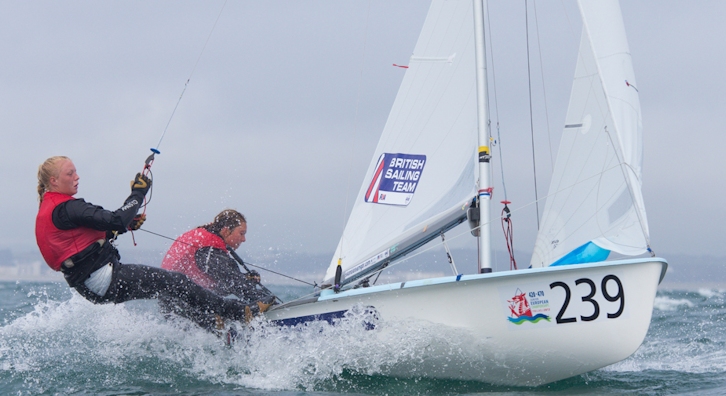 “It was a bit crazy today,” said Lopez Ravetlatt. “You just had to keep going and see if the others failed, because it was not our wind. We are very light and we did what we could and wanted to stay with everyone during upwind and we go fast downwind, so we could then take some places.”

Germany’s sisters Greta and Anna Markfort will compete in their first Championship medal race tomorrow, after taking the race 10 glory which advanced them into the top 8.

“We always need a few days to get in the racing, the fleet, the other teams and wind conditions,” said the younger of the sisters, Greta. “Today was good, we were fast and it was fun.”

Their partnership in the boat has been tense in the past. “But now it is going quite alright,” laughed Anna. “You know we went through some difficult times and had some fights on the boat, but now we are fine.” 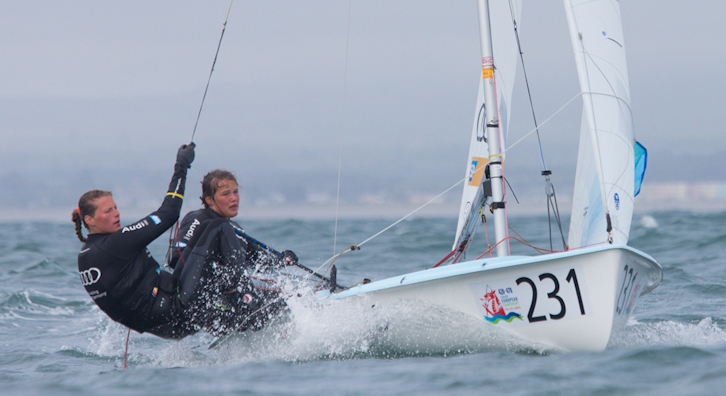 As with the 470 Men, it is the same top eight teams going into the day who advance to tomorrow’s Medal Race, just in a slightly different order.

420 Junior Europeans
The change in weather shook teams up around the race track today, as many of the lighter crews struggled in the strong gusts and fairly brutal wave patterns.

Championship leaders Ilaria Paternoster/Benedetta di Salle dropped to second overall after a 26th place finish in race 9, allowing France’s Marie Soler/Philip Meijer to move on up and claim the lead. A race later and a slight improvement in finishing position for the Italians with a 22nd place finish pushed them back to the front, as the French struggled back in the fleet taking a 41st place finish. 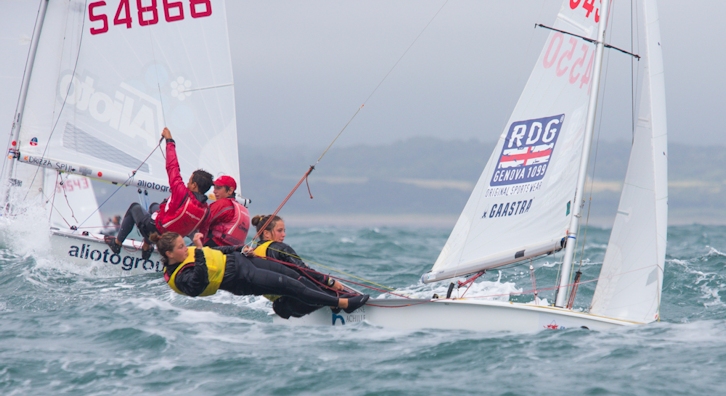 From perfect racing conditions, ideally suited to the pair, today the Italians were facing a different game out on the track. “Today was a very, very difficult day because the wind was very strong for us,” said di Salle. “It was not good, and there were a lot of boys before us, with only 3 or 4 girls in front of us, such as the Spanish team. Today in the first race, it was not good as we didn’t have a good start, so all the fleet were ahead of us. Tomorrow, we will do the best race we can.”

Bart Lambriex/Philip Meijer from the Netherlands recovered from a pretty spectacular capsize in the opening race of the day, and ended with a 13th place to sit in second on the leaderboard.

“In the first race we capsized in the reach, when we were in 20th, and we finished virtually last, which was not a good race, but it is now our discard,” said Lambriex. “In the second race, there was less wind and we managed to finish in 13th so we are quite happy.”

Meijer added, “Tomorrow is going to be very exciting. There will not be much wind, which is very good for us and the points will be very close. We will just do our best and we will see.”

As host nation, Great Britain is looking strong with four teams in the top 10, with the British charge led by Tim Riley/Luke Burywood who are in 5th overall. At the beginning of the week, Riley said he wanted to medal and be top British boat, and so far he is right on track. 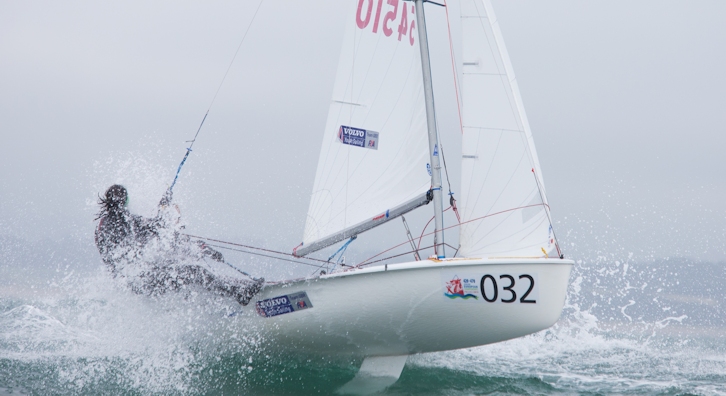 Thriving in the stronger conditions today were the Antipodean teams of Taylor Burn/Henry Gibbs (NZL) and Xavier Winston Smith/Joshua Dawson (AUS). The Kiwi pair move up ten leaderboard places to 8th overall from their 2,1 score, with the Australians up from 27th to 14th from a 6,3 scoreline. Also finding their pace in the stronger breeze were the USA’s Renier Eenkema Van Dijk/Spencer McDonough who virtually halved their leaderboard position from 28th to 15th.

With the 2013 420 Junior European Championship medals to be awarded tomorrow, the leaderboard is still all open. Two races are scheduled for the gold and silver 420 fleets with the first start at 1300 hours.