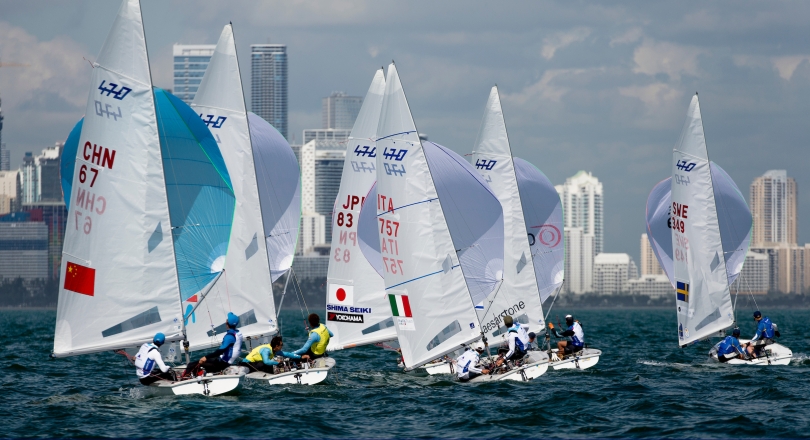 HEMPEL WORLD CUP SERIES TO HEAT UP IN MIAMI

The Hempel World Cup Series rolls into Miami, in the sunshine state of Florida, USA from 19 - 25 January 2020 for the second instalment of the 2020 Series.

205 sailors from 50 nations will race across seven fleets in Miami and the stakes are high for North American competitors. The event is the final opportunity for nations to qualify to the Tokyo 2020 Olympic Sailing Competition across the 470 and RS:X fleets, Laser, Laser Radial and Finn.

Racing commences on Monday 20 January and will conclude with seven Medal Races on Saturday 25 January, which will be broadcast live on World Sailing's YouTube Channel.

The highest calibre of competition will be in the 470 fleets where 30 male and 18 female teams will race.

Mat Belcher and Will Ryan (AUS), Jordi Xammar and Nico Rodriguez (ESP) and Anton Dahlberg and Fredrik Bergström (SWE) have fought for major titles over the last 12 months and regularly share the podium.

At the Enoshima triple-header in August and September, where the trio sailed at the 470 World Championships, READY STEADY TOKYO and Hempel World Cup Series Enoshima, the Australians took three golds. The Spaniards took two silver medals and a bronze and the Swedes secured a silver, bronze and a fourth place.

They will continue their fight in Miami as they aim to put a marker down ahead of Tokyo 2020. The race for Olympic qualification in North American will be between Canada and Mexico who have three teams respectively.

In the Women's 470, Camille Lecointre and Aloise Retornaz of France have emerged as Tokyo 2020 medal favourites after they secured the 2019 Hempel World Cup Series title, gold at READY STEADY TOKYO and the 2019 European Championship. They will spearhead the Women's 470 fleet with further contenders including Afrodite Zegers and Lobke Berkhout (NED), defending Miami champions Frederike Loewe and Anna Markfort (GER) and Silvia Mas and Patricia Cantero (ESP).

The only nation in the running for the North American Tokyo 2020 spot in the Women's 470 is the USA. The event also acts as an American team qualifier with Nikole Barnes and Lara Dallman-Weiss, Carmen and Emma Cowles as well as Atlantic and Nora Brugman evenly-matched.

Results will be available here - http://sailing.org/worldcup/results/index.php.

Saturday Medal Races - Men's and Women's 470, will be available to watch here - https://youtu.be/kBBpDfCOzRU.

PRESS RELEASES
All World Sailing international press releases throughout the duration of the Hempel World Cup Series, including the latest news and reports, are available to read here - http://www.sailing.org/worldcup/news/index.php.