Whilst the leading teams in the yellow and blue fleets were celebrating hat tricks with three wins apiece, for others it was all about making the top 40 cut to the gold fleet and the chance of securing one of the nineteen slots on offer here in Perth to qualify their nation for the 2012 Olympic Games. 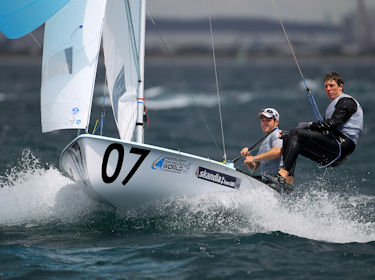 Racing got underway just after 1200 hours in a steady and building breeze of around 12 knots, which by race five for both fleets had reached gusts of up to 22 knots and just under a one metre sea – the Fremantle Doctor had returned. It was a long day out on the race course with three races for both the yellow and blue fleets to try and get the racing back to schedule after Tuesday’s abandonment of racing due to electrical storms.

An imposing show of form gave Mat Belcher/Malcolm Page (AUS) in the yellow fleet and Luke Patience/Stuart Bithell (GBR) in the blue fleet three race wins each – not something you see often, but a performance which would not be unexpected from these two teams. The overall lead after five races goes to Patience/ Bithell (GBR) on tiebreak over the Australians.

Racing in the yellow fleet got underway first and a tidy win to Mat Belcher/Malcolm Page (AUS) with a 30 second margin over the second placed Nicolas Charbonnier/Jeremie Mion (FRA) marked the first of the defending World Champion’s winning finishes. Charbonnier/Mion (FRA) had the best start of the fleet at the pin end of the line, but by mark one the Aussies were ahead and the French were more concerned about successfully holding off their team mates Pierre Leboucher/Vincent Garos (FRA).

In the blue fleet, it was showdown time for the respective 2011 and 2010 470 European champions who came head to head and the battle between Sime Fantela/Igor Marenic (CRO) and 2010 European title holders Panagiotis Mantis/Pavlos Kagialis (GRE) didn’t disappoint. But a sixteenth in race three was not what the Greeks had planned for today’s opener as they finished over two minutes behind the Croatians. To the outsider it looked effortless as the British team of Patience/Bithell (GBR) delivered a comparable race win to the Aussies opener with a 37 second margin over Fantela/ Marenic, followed by Sweden’s Anton Dahlberg/Sebastian Ostling.

Yellow fleet race 4 involved an incident at a mark between Sven and Kalle Coster (NED) and Paul Snow Hansen/Jason Saunders (NZL), which saw the Kiwis come out ahead to finish in third overall. Penalty turns after the windward mark for Ryunosuke Harada/Yugo Yoshida (JPN) pushed their performance down to a fifteenth place finish. At the front of the pack Belcher/Page took another decisive race win over Nick Rogers/Chris Grube (GBR) in second.

Matching the Aussie pace, Patience/Bithell claimed their second victory in blue fleet race 4, with the biggest winning margin of the day of 44 seconds, over Ferdinand Gerz/Patrick Follman (GER). A third to Lucas Calabrese/Juan de la Fuente delivered the Argentineans their best result of the series so far.

De la Fuente was not so happy later in the day though, “The first two races we were good and the last not so good. Maybe we were a bit tired and it was very tricky as the wind got up before the start of the third race and then went down a lot during the first upwind. It was really, really tricky. We had a good start and then I don’t know.”

The final race 5 of the day for the yellow fleet got underway in a building breeze of around 20 knots, and whilst not their best start of the day, it was again victory to Belcher/Page for a hat trick, but only just. An Aussie capsize on the final upwind leg handed the lead to Nic Asher/Elliot Willis (GBR), with the Aussies in pursuit. But a misjudgement of the layline for the race leaders Asher/Willis forced them to put in another tack, and they then fouled the Australians as they crossed in front of them on port tack. Penalty turns for the British handed the lead back to the Australians who seized it and flew downwind for a race win, with Gideon Kliger/Eran Sela in second and the British in third.

However, Gideon Kliger (ISR) was not happy with his day, “The first two races we didn’t do good at all. We were ahead but we would then lose our gain. We were not sailing our best and made silly mistakes. Like always when you lose it is because of making mistakes more than the others. The last race was much better and we improved our strategy and I hope from now on we will make better choices.”

Blue fleet race 5 saw stunning judgement from Paul Snow Hansen/Jason Saunders (NZL) who were on course for their worst result of the series as they rounded the windward mark in fifteenth. But with nothing to lose they took a bit of a gamble and headed off by themselves to the left downwind. It paid off and they advanced to cross the line in eighth which helped consolidate their place in the fleet to end the day in fifth overall.

Saunders concluded, “It wasn’t the best day for us. The first race was pretty frustrating – we were top ten going around the course and then had a bad beat and put ourselves out of it a bit. In the second race we sailed really well and finished third which was pretty pleasing . In the last race we managed to catch up a lot.” Referring to their downwind gamble, Saunders explained, “We talked a lot about it coming into the top mark and we felt like the breeze was a bit further to the right and there was really good pressure there so we thought we would take the gybe early and head out there. We had good boat speed and really caught up a lot which put us back in the race.”

Race 5 for the blue fleet saw Mantis/Kagialis (GRE) leading over Fantela/Marenic (CRO) for the first upwind and downwind legs, with Patience/Bithell in third as they raced two laps of the inner loop trapezoid course. Lead changes swapped between the teams, but the British sailed through to take victory with Croatia second, Greece third.

“They don’t come often,” was the comment from a smiling Luke Patience in reference to the hat trick. Their three race wins gives them a scoreline of four wins in a row as they took the gun in Monday’s race 2 as well. “Me and Stuart have worked so hard for this regatta, with Morgan our coach, and we have made sure we have covered all the bases and ultimately four wins in a row - we’ll take that. It doesn’t come often, but we have to keep it in perspective as we are not even at the halfway stage yet so anything can happen. We are not alone and it is going to be a tough battle right to the end. I am sure as ever in this crazy sport it will go down to the last run in the medal race, whoever that boat may be, and hopefully it is me and Stu.”

Ashore after racing, Page also reflected on the day, “It was great - against the best guys in the world - we are very happy.” Looking forwards to the head to head to come against Patience/Bithell, Page continued, “It will most probably be no different to last year’s World Championships. The two of us were neck and neck there as well, but saying that it is still early days.” Page claimed responsibility for their capsize in race 5, “I must admit that last race today was my mistake, the capsize. I am blaming that on the old body. It didn’t want to get going through a tack, so I have taken that on the chin. Mat has a credit now for a mistake he may make later on in the regatta!”

Forty teams from twenty-five different nations have qualified to the gold fleet and by the end of the final series on Saturday 10 December nineteen of those nations will have secured themselves qualification to the 2012 Olympic Sailing Competition. As host nation, Great Britain is automatically entitled to an Olympic berth, so the status is that twenty-four nations are hunting for the 19 slots on offer here in Perth - so get set for the next stage of the racing to unfold and some jostling for positions.

Racing for the 470 Men will continue on Thursday 8 December with one race 6 scheduled for each of the gold and silver fleets.