Great Britain and France Lead The Fleets in Miami 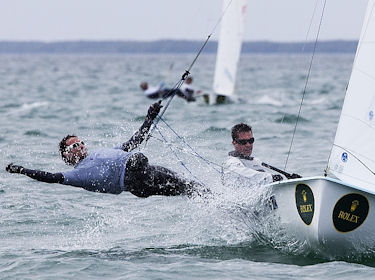 There was plenty of action on the opening day of US SAILING’s Rolex Miami OCR with two races apiece in the 470 men and women in 12-14 knot breezes. On seven different courses on Biscayne Bay, 716 sailors in the Olympic and Paralympic classes from 53 countries worked as if there were no tomorrow to get to the top of the scoreboard, but there is a lot of racing to determine if early leaders are meant to be champions in the end.

The opening day's races were sailed in a puffy 12-14 knot easterly. There were not that many shifts, so sailing in the pressure and picking the correct shifts to tack on was important. 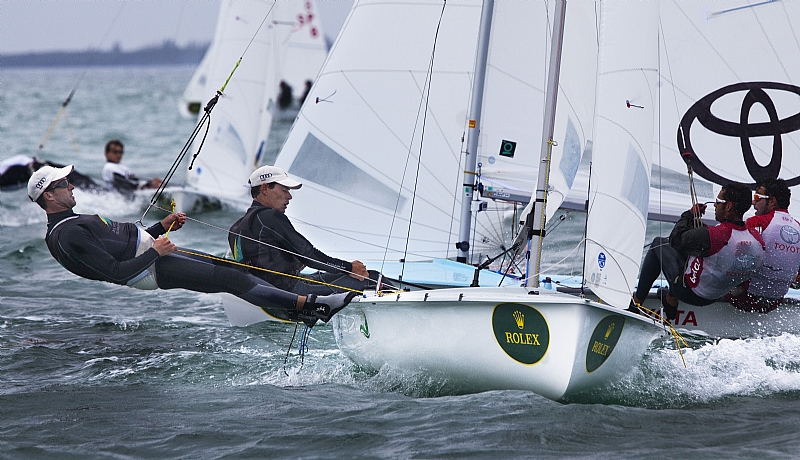 Great to see some new teams from Venezuela, Puerto Rico and Chile here in Miami. The Venezuelan and Puerto Rican team had a bit of training in a world class fleet before Rolex Miami OCR as they competed at the 2011 470 North American Championships.

Monday was a golden day for the British, with Nic Asher and Elliot Willis (GBR) securing a 1,3 to finish the opening day just one point ahead of team mates Luke Patience and Stuart Bithell (GBR). A few points behind in third are Croatia's Sime Fantela and Igor Marenic.

Taking the second bullet of the day were Ferdinand Gerz with new crew Patrick Follmann of Germany who find themselves in fifth overall. If Gerz who is ranked #34 in the world and crew Follmann manage to hold tight at this level in the event it will mark Ferdinand's best ever performance at an ISAF Sailing World Cup event. Gerz and Follmann started their 2010/2011 ISAF Sailing World Cup campaign convincingly at Sail Melbourne to finish sixth overall. 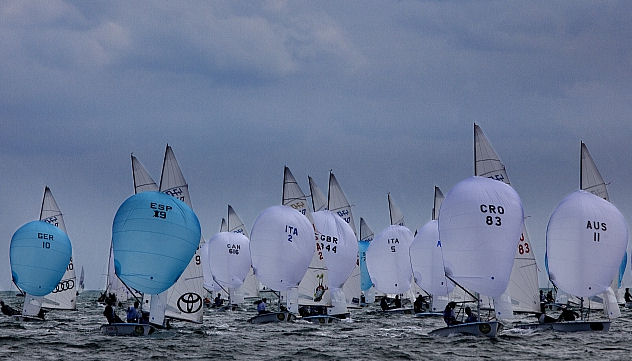 The defending World Champions and current World Cup holders Mat Belcher and Malcolm Page of Australia sit tidily in fourth after a second in race 1 and a slightly lower posting of 8 in race 2.

There are nine American teams competing in Miami, with the top ranked and top performers on day one being Stuart McNay and Graham Biehl in ninth. USA is showcasing some new faces and it will be interesting to see how their performances unfold in this world class event. Similarly for Canada, with five teams here in Miami.

470 Women
The 470 Women's fleet is so far a reverse order of the overall results from the recent 2011 470 North American Championships for the top two boats, with Ingrid Petigjean and Nadege Douroux (FRA) in first and team mates Camille Lecointre and Mathilde Geron second – as they claimed a race win each. In third are Penny Clark and Katrina Hughes of Great Britain. The British team delivered a similarly stunning opener to the North Americans but ultimately couldn't maintain form and slipped down the leaderboard to finish fourth overall – they will be on a mission to avoid a repeat!

Argentina's Fernanda Sesto and Consuleo Monsegur put in a great performance of 6,3 to sit in fourth. Whilst a few heads were turned by the young and aspiring American team of Anne Haeger and Briana Provancha who finished the day in fifth overall. Haeger and Provancha sit at #51 on the ISAF Sailing World Rankings and have certainly made an impression on their first day's performance – the challenge is now to continue at that level. They finished fifteenth at the 470 North Americans. Identified as future Olympic prospects, in November 2010 the pair earned the honour of becoming members of the 2011 US Sailing Development Team.

Racing continues until Saturday 29 January, which will see the top 10 finishers in the opening series advance to the final medal race.