Sime Fantela/Igor Marenic have wrapped up the 2012 470 European Championship title after a win in race 12. 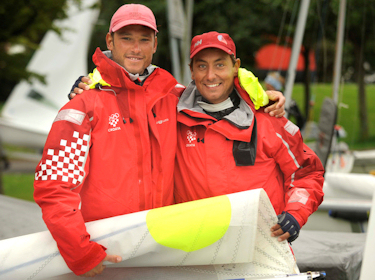 With a 22 point advantage over the next team and with 12 races completed ahead of the Medal Race, even if they finish last in the double-points Medal Race, it is impossible for any team to catch them.

Croatia’s Sime Fantela/Igor Marenic have wrapped up the 2012 470 European Championship title after today’s win in race 12. With a 22 point advantage over the second placed team at the end of today, even if they finish last in the double-points Medal Race, they are in an unassailable position. A great boost to their Olympic campaign and a successful defence of the European Championship title they secured in 2011.

Today was a tense penultimate day and the last opportunity to make the cut to be amongst the top 10 teams going through to Wednesday’s Medal Race, which will decide the podium finishers at the 2012 470 European Championship,

With some teams still hoping a strong performance today would give them the break required to make the top 10 threshold, for the teams at the top of the leaderboard, and already assured of being in the Medal Race, it was about putting in a couple more solid race results to consolidate their points score.

After a postponement ashore, the teams were sent out to the race course in a day that was to test the focus of the most experienced athletes.

470 Men
A general recall to the start of race 11, before Sime Fantela/Igor Marenic (CRO) showed their superiority to lead the fleet to the windward mark, chased hard by David Bargehr/Lukas Mahr (AUT).

The pursuing Austrians kept the pressure on with two of the Olympic teams, Russia’s Sheremetyev brothers and Switzerland’s Yannick Brauchli/Romuald Hausser, adding to the weight of force challenging the Croatians. 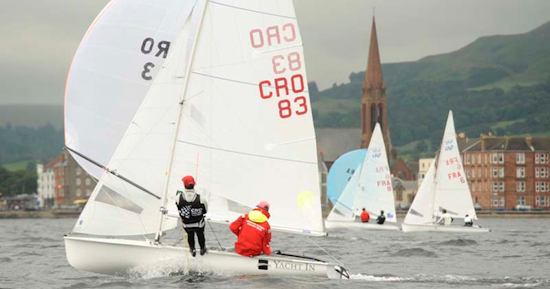 A pumping infringement for Fantela/Marenic just before the final turning mark to the finish, forced a quick spinnaker drop and 720 degree turns, which saw the Croatians drop back and cross the line in fifth.

Fantela said, “We were second all the time fighting with the Austrians to be first. In the last downwind just before the finish the jury penalised us and there were three boats behind us and not enough room to do the penalty turns and stay ahead, so we lost three points. We thought they would be crucial but with the last race result it was enough. We can now go into the Medal Race tomorrow secure.”

Seizing the opportunity of the Croatian demise, it was an easier race 11 victory to David Bargehr/Lukas Mahr (AUT). The win didn’t make a massive impact on their leaderboard position, moving the Austrians from 18th to 17th, it was the Russian’s second place that was more critical.

Intent on closing the points gap to the Croatian defending European Champions, world ranked #23 Mikhail Sheremetyev/Maxim Sheremetyev sailed a perfect race. They stayed at the front of the fleet to finish 2nd and covered behind, with the added bonus of the Croatian penalty helping to reduce the margin to leaders to only 6 points after race 11.

But with Fantela/Marenic steaming to a win in race 12, and the Russians posting a 21st their worst result of the series, all hope of a shot at the Championship title vanished.

The Croatians were not aware until they came ashore and saw the overall results of their victory, as Fantela said, “We thought it would be closer, but the Russians had a bad last race and it created the gap.”

“This is really nice. It is our third European gold. We are happy, we work hard, we train hard and all our life is about sailing. We want to congratulate our coach, father and manager Edo - my father - and thank all of our families and friends who have supported us all these years,” said Fantela. 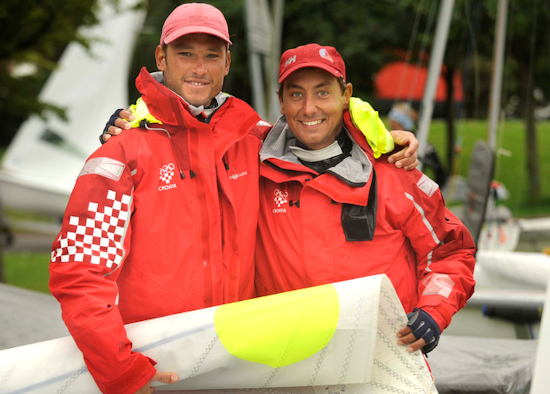 Going into the Medal Race, the Russians have dropped into third with a 3 point deficit to the second placed Ben Saxton/Richard Mason (GBR), and the Greek Olympic team of Panagiotis Kampouridis/Efstathios Papadopoulos are in fourth. It is these three teams who will now do battle for the silver and bronze medals.

470 Women
Another tricky day out on the race track, with pressure varying all over the course. Making the right decision was critical in teams’ fortunes as they jostled for race finishes.

Race 11 in the 470 Women saw the overnight lead was swapped, with Great Britain’s Sophie Weguelin/Sophie Ainsworth giving way to Germany’s Annika Bochmann/Elisabeth Panuschka, after an unlucky 13th gave them their worse score of the series. 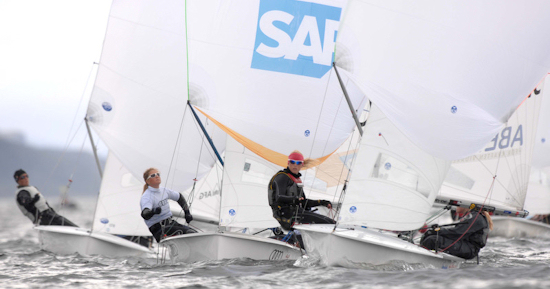 “It was tricky today with a persistent shift on the top left hand side, but you could take what was good numbers out to the right and constantly be lifting whilst the boats inside you had more pressure and were lifting more. We didn’t have a great first race, then we tried to come back and have a good second as we knew we had a fairly reasonable discard but we couldn’t afford to have a bad second,” said Ainsworth.

Another race later, and the shoe was on the other foot, with the Germans scoring their worst result of the series, a 12th, and the lead was again exchanged, as Ainsworth explained, “We hung on, did the best we could and it turned out we have a two point gap now on the boat behind us, which will make tomorrow fairly interesting as we are all fairly close. There are four of us that could medal, it will probably be between the top three of us who have a bit of a margin, but anything could happen, especially if the racing is anything like today.”

A push to the end from Croatia’s Enia Nincevic/Romana Zupan who went into today in fourth overall and needing to pull some inspired form from their bag to close the gap on the top three teams. Third around the first windward mark of race 11, they geared up to second overall on the downwind leg from where they pushed hard to take the lead from Maelen Lemaitre/Aloise Retornaz (FRA) and cross the line first. A stunning performance, which reduced their deficit to the third place Slovenian team of Tina Mrak/Teja Cerne and put them back in the medal hunt.

“Anything can happen and that’s why I love sailing,” smiled Zupan, adding, “It was a good race. We knew from the beginning what we wanted to do and that is what we did. We had a really good downwind,were third and gained some places to finish first.”

Frustrated at the mountain they put in front of themselves, particularly after race day 4, their results from the past two days have more than proved the ability of the team. “It was so bad I know. But then again it is sailing and you can come first and you can come last and there are some good teams here,” said Zupan.

“We finally put everything in order, the head, the boat and we just sailed very well and were very happy about that. We had some bad days and now we are back on the horse.”

Zupan smiled when asked whether they had another win up their sleeve for the Medal race, saying, “We will just sail the best we can. Possibly we will win, we know we can do it now.” 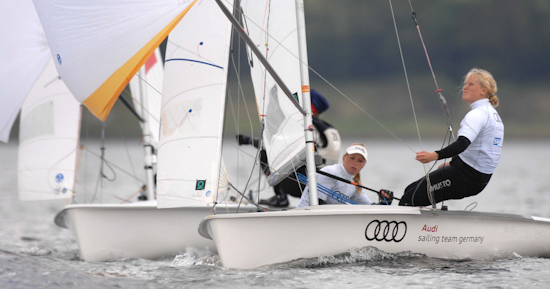 A win in race 12 for Amy Seabright/Eilidh McIntyre (GBR) keeps them safely in the Medal Race players. McIntyre commented, “We had a really good start, we thought we might have been over. But it was a good trigger and we were pretty rapid. We took out everybody above us and carried it out left. The wind was steady and we said it’s a race for pressure so let’s head for the pressure and we won.”

So game on for the medal race, with the top four teams all in the hunt for the 2012 470 European Championship medals.

Final and Medal Races
The racing programme for the final day of racing on Wednesday will see a final race for the teams not in the Medal Race, and then the Medal Race. All fleets will sail a windward/leeward course format, with the final races scheduled to get underway at 1100 hours for the 470 Men followed by the 470 Women.

The top 10 Medal Race teams will sail a shorter windward/leeward course with the 470 Women taking to the track for a scheduled warning signal of 1230 hours and the 470 Men scheduled for 1315 hours.

All racing will take place in the channel between Largs Sailing Club and the Isle of Cumbrae, providing a great opportunity for spectators.