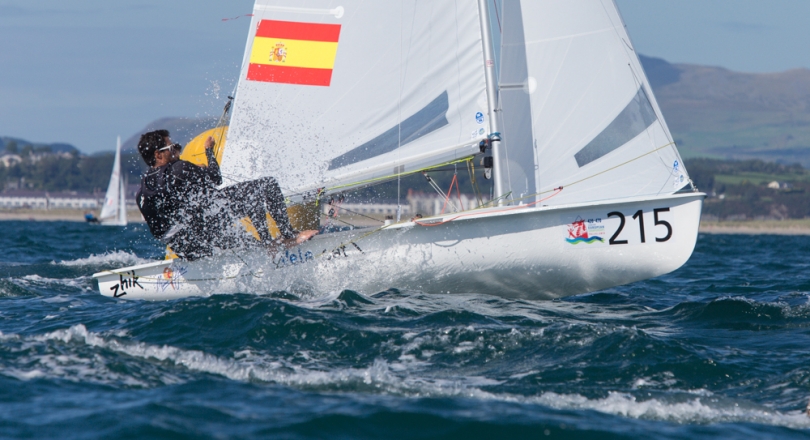 Racing got underway at 1400 hours on Cardigan Bay for the first day of racing at the 420 and 470 Junior Europeans taking place in Pwllheli, Great Britain.

Girls rule in the 420 Open fleet - which pitches all ninety-six girls, boys and mixed teams against each other - after the first 2 races of the qualification series, with Poland's Ewa Romaniuk/Katarzyna Goralska taking a 2 point lead over the Italian girls team of Illaria Paternoster/Benedetta di Salle in second place.

The teams couldn’t have asked for better conditions, with 10-12 knots, glorious sunshine and light waves which slowly built as racing progressed. The breeze started out at 240 degrees, then veered left to about 215 degrees for the second race.

The opening race win in the 470 Men fleet went to Spain's David and Alex Charles, with Julian Autenrieth/Adriean Hoesch in second and Israel's Gal Cohen/Dan Froyliche crossing the line in third.

All three teams were competing at the 470 Junior Worlds, although Autenrieth was racing with a different crew, so interesting to see how the form card changes are set to unfold over the 6 days or racing here at the 470 Junior Europeans.

A fifth place finish in race 2 for the Charles brothers positions them in first overall, with Israel’s Gal Cohen/Dan Froyliche on tiebreak in second, and Italy's Matteo Capurro/Matteo Puppo in third.

The Spanish dominated in the 420 fleet last year, winning the ISAF Youth Worlds and taking bronze medals at both the 420 Worlds and 420 Junior Europeans, before moving across to the 470 soon after.

Cohen/Froyliche recently finished third at the 470 Junior Worlds, and then competed at the 470 Worlds, as part of the training programme.

Cohen commented, “It was hard as always today, but we like these conditions. They are our conditions, just like we are used to in Israel.”

“We are a bit tired,” Froyliche added, “but all the experience we have gained over the summer is really helping our competition, and helps us to plan ahead.” 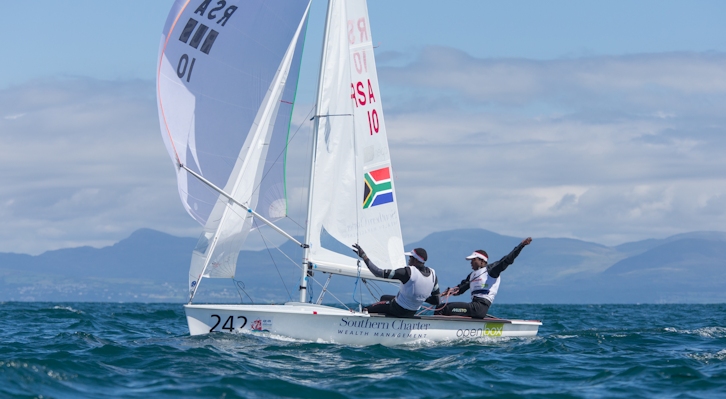 Race 2 belonged to Asenathi Jim/Sibu Sizatu from South Africa, who are competing in only their second international event together, their debut partnership being the 470 Junior Worlds in La Rochelle, where they finished 16th in the 59 boat fleet. Facing many of the same teams, they opened with a strong challenge, scoring a 12th and race win and sit in 5th on the leaderboard.

“We had the pace today, and we just needed to make some small decisions,” explained Jim. “In the first race we were in second overall, but then the wind came from the left and we really got shafted and we couldn’t get a lane. But we are happy with the result and it was not a disaster.”

Onto race 2 and the pair had their gloves off for a race win, which they delivered in style taking the lead from start to finish. “In the second race we were determined the same was not going to happen again and we nailed the start, which really worked out well for us. We led from the start to the finish,” Jim added.

“The pressure is for both of us, because the understanding of the fleet and how to position ourselves, we are still learning. Sibu is making the decisions upwind and I am calling downwind, and it has been an impressive partnership today.”

A slight surprise from the new 470 Junior World gold medallists, Jordi Xammar/Joan Herp (ESP) who posted a 6,11 score line to end the day in 7th overall. A performance similar to their opening day at the 470 Junior Worlds, after which they bounced back to win in La Rochelle.

In the 470 Women fleet, Amy Seabright/Anna Carpenter (GBR) came ashore holding the overall lead in the provisional results, but a subsequent disqualification in race 1 for touching the mark at the leeward gate dropped them to 9th on the leaderboard. 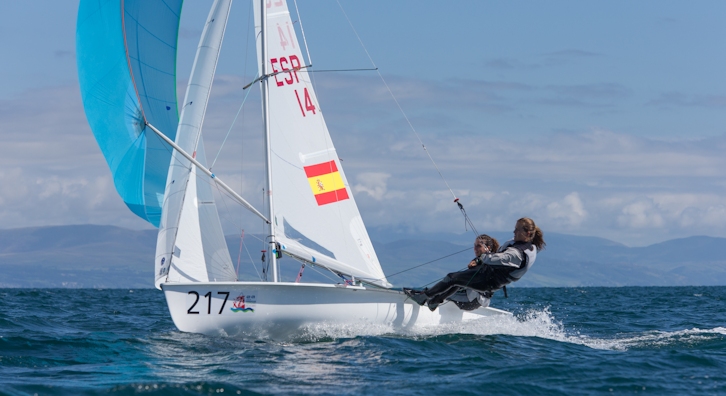 A consistent day's racing for the 2012 470 Junior European bronze medallists Joanna Freeman/Katie Tomsett of Great Britain, the only podium finishing team from last year making an appearance here in Pwllheli, who lead the series after day one. Behind them in second overall, are Anna Kyselova/Anastasiya Krasko from the Ukraine who claimed the silver medal at the 470 Junior Worlds. 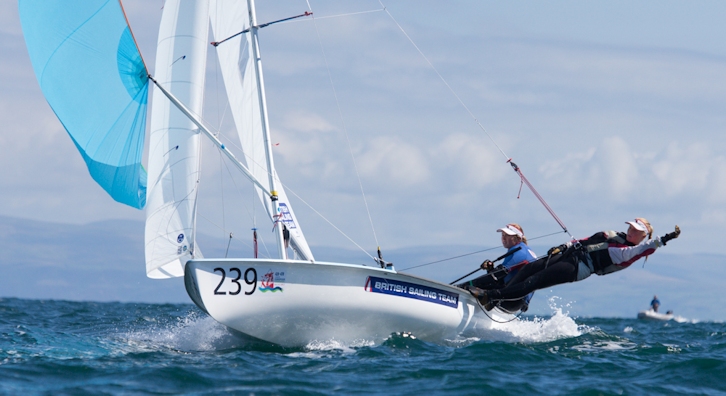 “We are happy with today as a good start to the event. I think the last time I sailed up here was about 4 years ago for a 420 selector event, and we have trained here for a couple of days. We were a bit disappointed on narrowly missing out on a medal at the Junior Worlds, so we will be aiming to come up with a medal this time,” said Freeman on their medal upgrade ambitions.

Keeping an eye on the competition is key, and the second placed Ukrainians are in their sights. “They have definitely been sailing really well recently and they definitely sailed well in France, so they are one of the top teams,” she concluded.

In third overall are Annabel Vose/Kirstie Urwin (GBR), who were last year’s 420 Junior European Champions and stepped over to the 470 shortly after. The pair also raced the 470 Junior Worlds, finishing 15th.

The 420 teams were split into two fleets of 48 boats, racing in yellow and blue groups, for the first three days of qualification, before advancing to gold and silver for the final three days and 6 races of final series.

Impressive to see 420 girls teams outpacing the boys with a crushing performance to claim the top two positions after the first day of qualification. Poland's Ewa Romaniuk/Katarzyna Goralska scoring a 1,3 to lead and Italy’s Illaria Paternoster/Benedetta di Salle finished in 4,2 to end their day in second place. 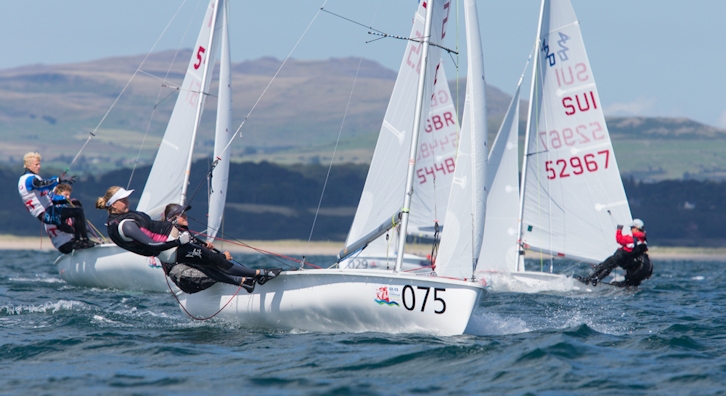 Paternoster/di Salle, claimed the bronze medal at the ISAF Youth Worlds this year, and won gold at the previous year’s Championship in 2012, but are yet to convert this success to the 470 World or Junior Europeans podium steps – this may be their year.

The Polish combination of Romaniuk/Goralska are racing their first season together and recently finished 9th at the ISAF Youth Worlds.

“These are our conditions and we really like them,” said Romaniuk. “We just sailed well today.”

Goralska added, “We trained here for two days before the Championship. Today it was easy, as it was perfect conditions for us. We only had a good start in the second race, but we won the first race because of a bit of luck. We chose the left and it was the right decision.” 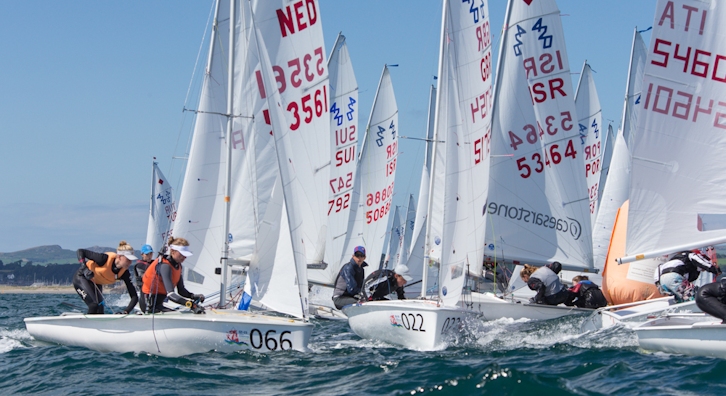 The top boys' team on the leaderboard are Portugal's Diogo Pereira/Pedro Cruz who make an appearance in third overall and also delivered a top performance at the ISAF Youth Worlds, securing bronze and then finishing in 6th at the 420 Worlds. But they are sandwiched either side of girls teams, with 4th and 5th places also belonging to the fairer gender. The top 10 leaderboard is an equal split of 5 girls and 5 boys teams.

“We are happy,” said Pereira. “Just a small mistake in the last race and I took a swim which made us lose a lot of places in the upwind as I slipped when hiking. Our goal is to win, because we know we can do it. But for all our Championships our goal is top three.”

A busy summer of racing for the pair, with appearances at the ISAF Youths, 420 Worlds, Pereira also raced the 470 Worlds in La Rochelle with a different crew, and now the 470 Junior Europeans.

Pereira raced with Paulo Manso at the 470 Worlds in La Rochelle, “At the 470 Worlds, I got a lot of experience and now coming back to the 420 I realise I have learnt some things I didn’t know and it helps.”

Racing is scheduled to start at 1300 hours for the 420 and 470 fleets, but we are expecting some blustery conditions of 24 knots and gusts up to 36 knots forecast at midday.