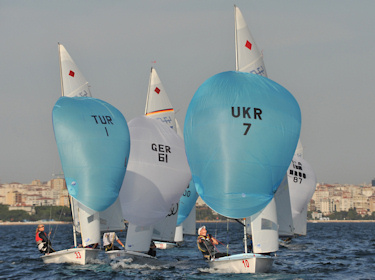 Up to today, the defending women’s champions from Italy have owned the 2010 Open 470 European Championships. Giulia Conti and Giovanna Micol might have had a bad opening heat at the beginning of the week, but since then a string of race wins had launched them into a seemingly unassailable lead.

A lot can happen in a day’s racing on the tricky waters of Istanbul, however, and after a tough two races the Italians face a real fight if they’re to keep hold of the European crown. Two French teams demonstrated incredible mastery of the light and patchy breezes, with Emanuelle Rol and Helene Defrance scoring two 3rd places to move into the lead.  Their team mates Camille Lecointre and Mathilde Geron scored two 2nds to move into 2nd overall, just a point off the lead.

Conti’s 10 point lead may now have dissolved into an 8-point deficit, but with two fleet races remaining in the 31-boat women’s division before the double-points Medal Race on Monday, there’s still time for the Italians to take their revenge.

The Italian skipper was in good spirits considering she’d just lost her lead. “Our performance was so and so,” said Conti. “The first race we were caught out by a big righty when we were on the left, and we lost 10 boats just like that, and we couldn’t recover.” However, the Italians were jolted into life during the next race after suffering a shocking start. “We rounded the top mark 3rd last, but we got closer to the boats in front of us, and on the second upwind stayed more in the middle of the course, tacking below other boats, not caring about bad air, just doing what we wanted to do. We climbed back up to 4th at the finish. We put a lot of effort in to end up in that position, we didn’t just sail into a corner and hope for some luck. I think that was our best race this week.”

The first race saw all kinds of leaders before the Israeli team of Gil Cohen and Dana Mamriev pulled through to win. “We like these conditions,” said Mamriev, “they remind us of sailing at home, working on the shifts and looking for the gusts.”

If that was lesson of the day, to sail the wind rather than the fleet, then the Greeks have certainly taken it to heart in the men’s Gold fleet. Overnight leaders Panagiotis Mantis and Pavlos Kagialis extended their advantage with two 5ths, and now lead by six points from Israel’s Gideon Kliger and Eran Sela, who won today’s first race.

Just two points behind the Israelis are another strong Greek duo, Panagiotis Kampouridis and Theodoros Polychronidis. French sailors Nicholas Charbonnier and Baptiste Meyer-Dieu won today’s other race and move up to 4th ahead of the defending European Champions, the Croatian team Sime Fantela and Igor Marenic who slipped badly today.

Charbonnier was pleased to have won a race, but said he had a lot to learn from how the Greeks handle the seemingly random shift and gust patterns. Even series leader Kagialis said he preferred strong winds, but was still happy to have done so well today. “In the second race we had a penalty from the jury at the start, I don’t know why. But we did a 720 turn, started last boat, but with good tactics we climbed up to the top five.” His helmsman Mantis attributed their success to “a lot of patience, and a little bit of luck. You always need luck!”

In the men’s Silver fleet, the points remain very tight with Finland’s Joonas and Niklas Lindgren holding on to the lead by a single point from 470 Junior World and European Champions, Sofian Bouvet and Jeremie Mion.

As for tomorrow, Gold fleet leader Panagiotis Mantis believes strong winds are returning. If his 24-hour weather forecasting proves as good as his short-term reading of the wind shifts, then we’ll be in for a storming final days’ fleet racing on the warm waters of Istanbul, before the Medal Race showdown on Monday.

If strong winds do return tomorrow, that would suit Giulia Conti just fine. Asked if she was ready for a fight, Conti replied: “I was born ready. It’s going to be tough because both of the French are very good sailors, smart and fast. So yes, it’s going to be tough, but the best team will win in the end.”

The 2010 Open 470 European Championships conclude on 6 September. The regatta is organised by The Istanbul Sailing Club in co-operation with the International 470 Class Association and the Turkish Sailing Federation.