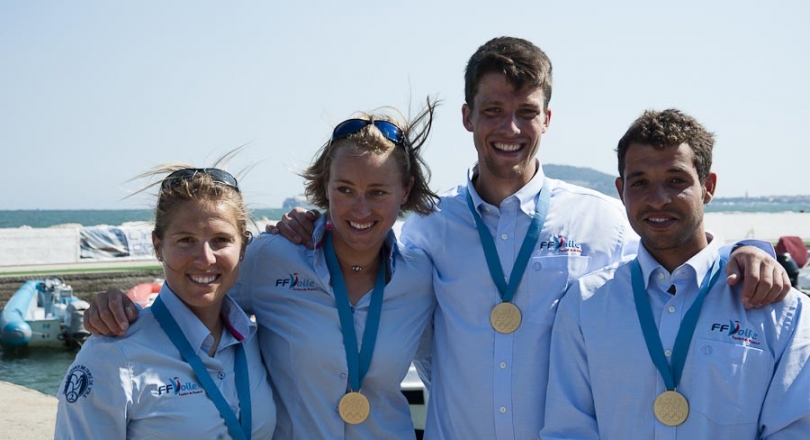 Double gold medals for France in the 470 Men and Women at the 470 European Championships, with teams from Austria, Croatia and Great Britain joining them on the podium.

It was a dog eat dog day to decide the 470 European Championship titles. Going into the day, in the 470 Women fleet the teams guaranteed of medals were determined, but not which team would secure the gold or silver. Over in the 470 Men event, the only team assured of a medal were Sofian Bouvet/Jérémie Mion (FRA), who had either the gold or silver in their hands dependent on the Medal Race outcome. 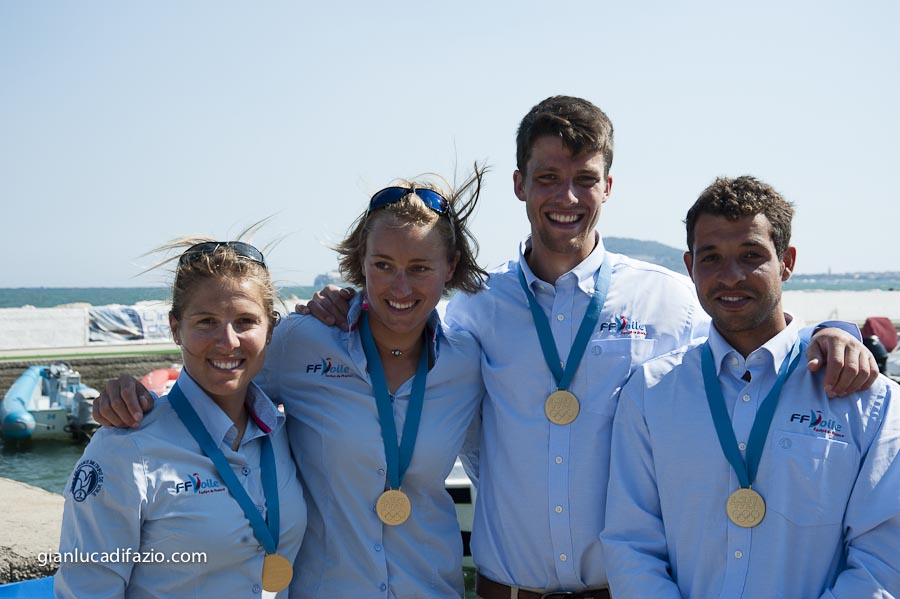 470 WOMEN
Up first onto the Medal Race track, which was located just off the harbour wall with, were the 470 Women. When racing got underway, the breeze was around 6-7 knots and fairly shift across the course.

The European Championship gold medal was all about Camille Lecointre/Mathilde Geron of France and Lara Vadlau/Jola Ogar from Austria. Who dares wins – and initially the daring win looked set to be with Vadlau/Ogar who were up in second overall after the first upwind and held their position virtually to the bottom of the first downwind leg behind Jo Aleh/Polly Powrie. But a gybe for the gate by the Kiwis forced the Austrian pair to hold off before they could gybe, losing them valuable ground which the French swiftly moved in to. By the next upwind mark, the Austrians were in last place with an immense challenge ahead to catch up, whilst the French team had assured themselves of gold.

The Austrian pair fought back and managed to move up one place to 7th but were left 10 points adrift of the French who safely sailed through to claim gold after crossing the line in third.

Ashore after racing, a beaming Lecointre said, "This is the first victory ever at big event for us. We were always 2nd, 3rd or 4th, so this is a major victory!"

“We made a mistake by not starting next to the Austrians and not controlling them,” explained Lecointre. “But we managed to catch them in the first downwind. Then because of the wind shift, we were in a position to gybe before them going into the gate, and we rounded in front of them and then we were then in control.” From that point the gold medal was safely in their hands. 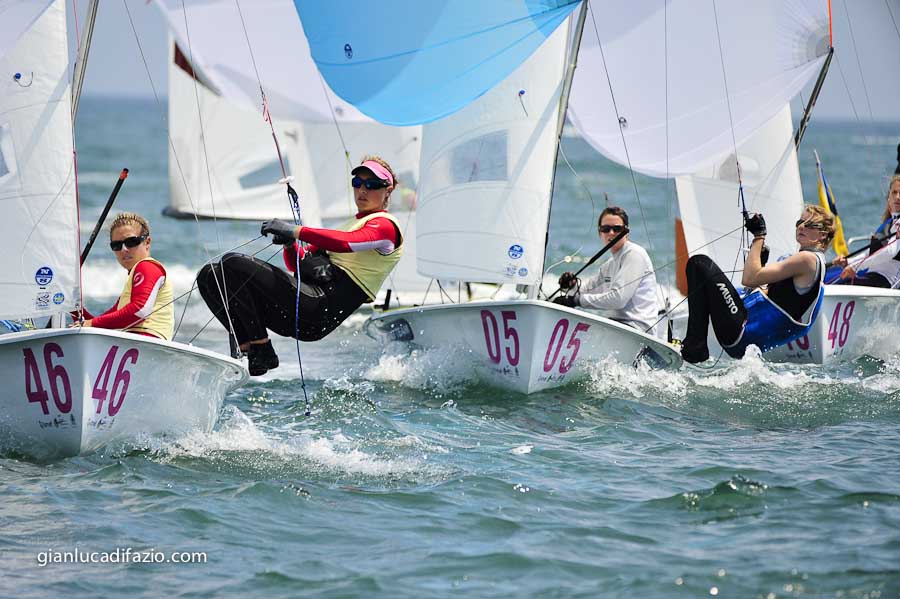 Whilst disappointed to have lost the valuable places in the downwind let, Ogar was philosophical about the tactical situation they found themselves in, saying, “This was a really tough tactical situation and we had spoken a lot with our coaches about how we should defend as we haven’t managed to do so before now, and this situation has happened before.” However, their silver medal success is what counted today and Ogar acknowledged their success, “For us this result is really great. All the time, even in the World Cup, we were really close to a medal position, but never medalled. We both know our time is coming and we are really happy to get a silver medal at the European Championship.” 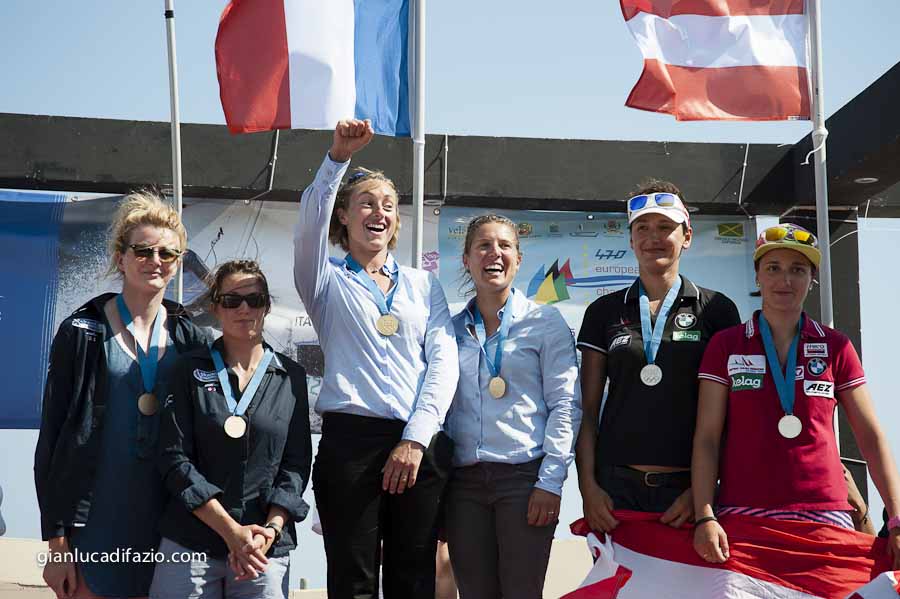 Defending European Champion, Sophie Weguelin and her new crew Eilidh McIntyre were guaranteed the bronze medal going into the day, and with nothing to lose were on a mission to secure a top three place in the Open Europeans leaderboard too. They would have to beat the Olympic Gold Medal pair of Jo Aleh/Polly Powrie and the Kiwis were certainly not letting anyone get in their way today knocking out a start to finish Medal Race win, which handed them second overall at the 470 Women Open Europeans, with Camille Lecointre/Mathilde Geron first and Lara Vadlau/Jolanta Ogarin third.

470 MEN
Sofian Bouvet/Jérémie Mion (FRA) did just what they needed to do today and finished 5th in the Medal Race to safely assure them of gold. Finishing one boat behind in 6th were Luke Patience/Joe Glanfield (GBR) who kept hold of their position on the leaderboard going into the Medale race to win the silver medal, with Sime Fantela/Igor Marenic (CRO) taking the bronze after a 4th place finish. 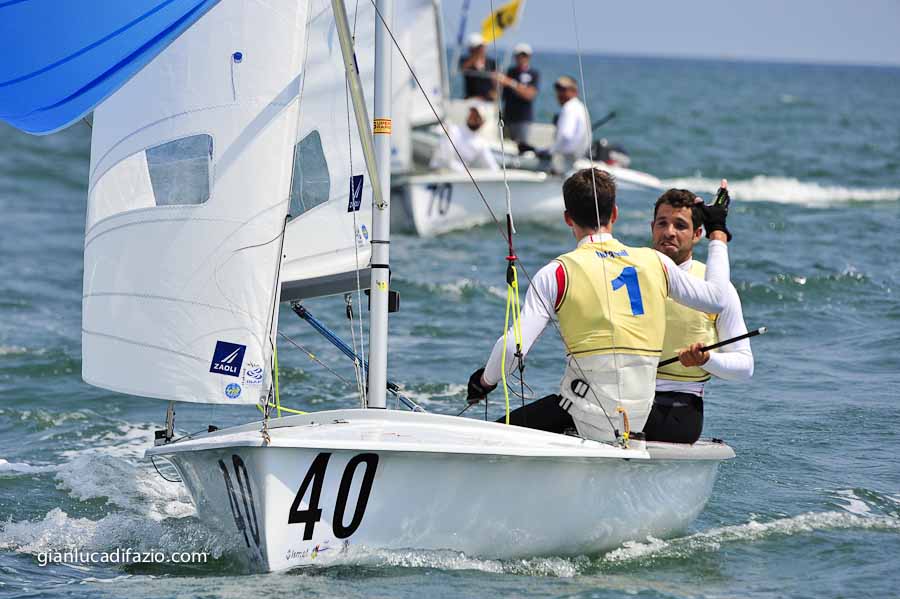 “It is indescribable how we feel, it is really nice,” said Mion. “We won a few times in the junior fleet and now to win in the senior fleet is amazing. We wanted to win the regatta, but for sure we are really happy to win the European Championship.We had good speed, and did a good start. Some people went to the right and the Australians were in the lead, so when we saw that he was too far ahead of us, we had to just focus on the British guys and we finished in front of them, so it was great.” 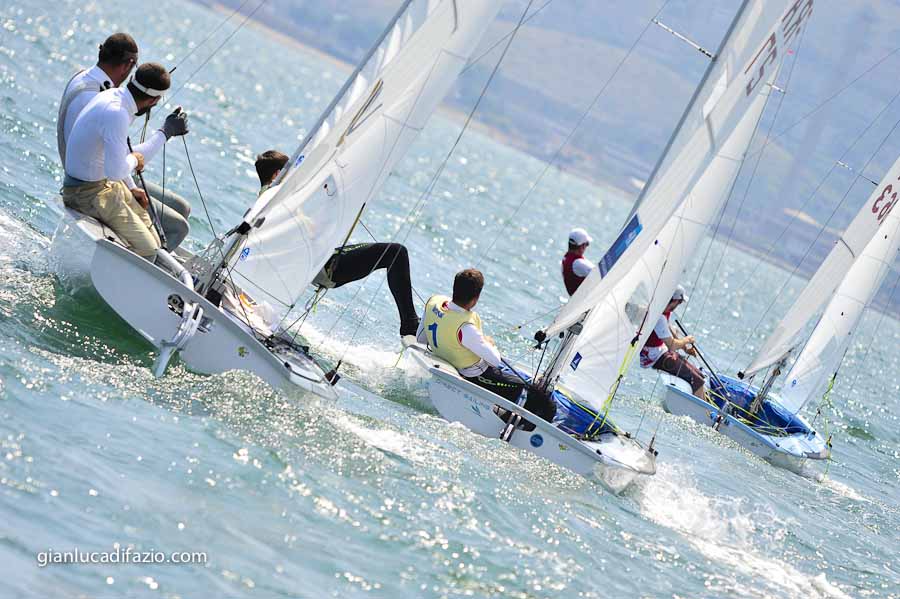 Yet another podium finish for Sime Fantela/Igor Marenic who now make it four years in a row to stand on have medals placed around their necks, including wins in 2009, 2011 and 2012. “We are happy and it is important for us to remain on the podium because of the funding status in our country, which was a big focus for us here,” explained Fantela. “The Medal Race was tough. The Greeks were ahead of us and we needed to take care of them, and Rogers/Elliot who theoretically could best us too, but we managed to hold on.” 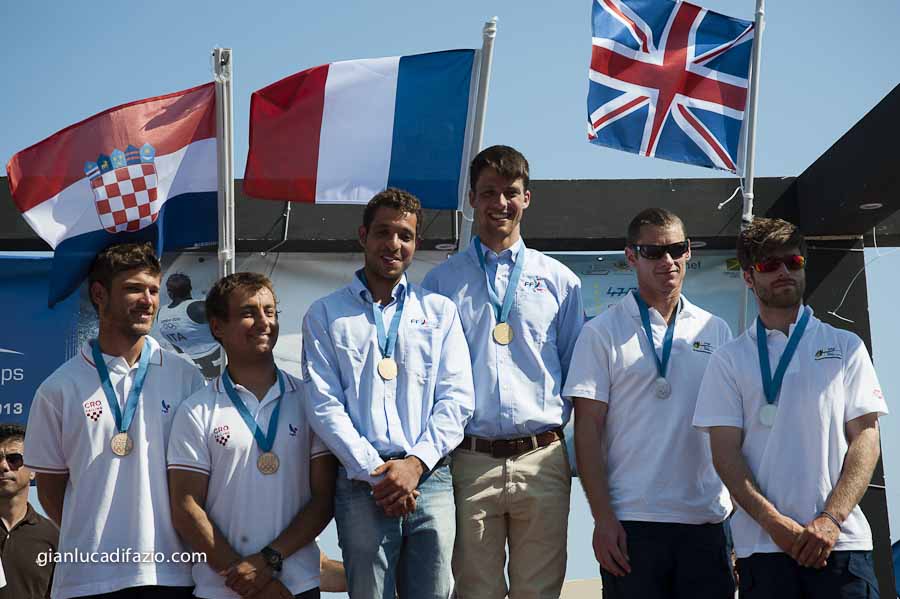 Runaway winners of the Medal Race in the 470 Men were Mat Belcher/Will Ryan (AUS). As a non-European team, they were not eligible for the 470 European Championship medals, but their race win put them top of the leaderboard for the 470 Open European Championships and marks Mat Belcher’s 16th consecutive event win. Bouvet/Mion were second and Lucas Calabrese/Juan de la Fuente (ARG) in third on the Open European leaderboard.