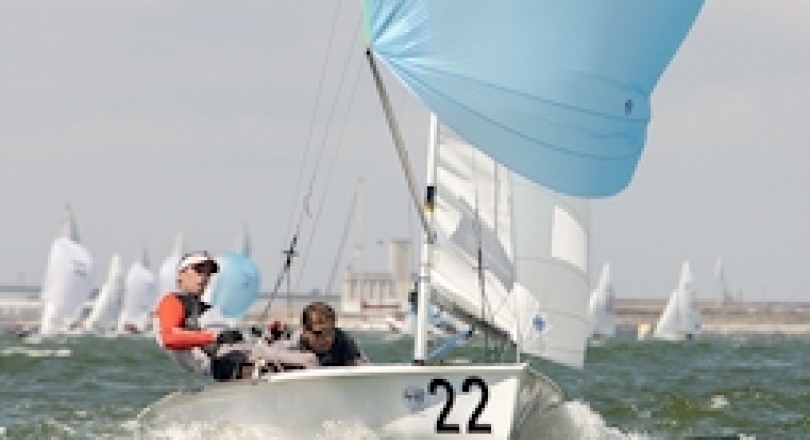 Another day of big changes on the scoreboards at the 2013 470 World Championships in La Rochelle, with some high scoring race finishes offsetting the lower point scores achieved by the leading teams. Claiming back their lead in the 470 Women are 2012 Olympic Gold Medallists Jo Aleh/Polly Powrie from New Zealand, with home-grown talent Pierre Leboucher/Nicolas Le Berre from France edging into the lead in the 470 Men.

Teams were postponed ashore to wait for the breeze to fill in, and got out to the race track around an hour later than scheduled in a fluctuating breeze of around 10 knots, in another day of tricky racing.

A big day of racing with three races for each fleet and the discard kicking in to settle out the scoreboard. Tomorrow there are now just two races of the finals stage left to decide the top 8 teams going through to Saturday’s medal race.

Host nation France are looking particularly strong, and having claimed both the 470 Men and 470 Women gold medals at the 470 European Championships in Formia, Italy back in July look to be positioning themselves well to have a shot at a repeat performance here in La Rochelle.

Jumping up from fifth to first are Leboucher/Le Berre, members of France’s elite 470 squad, who after their consistent day of racing now hold a 6 point margin over the world #1 team of Mat Belcher/Will Ryan. 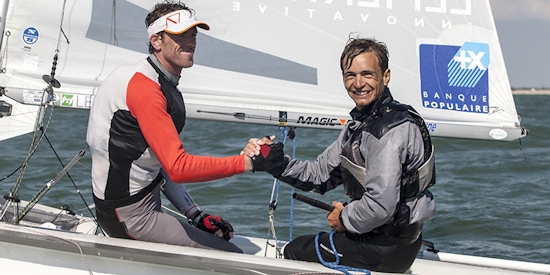 Commenting on the on going success of French 470 teams, Le Berre said, “France is the country of 470, as everyone knows. We have a continuous knowledge from years and years, and the older teams help the younger team to grow quite fast. By keeping this relationship we can keep the talent coming. This is the way today. The 470 is great, but we still miss medals at the Olympics. We have top teams but we need to improve for the last finishing line, this is what we have to work on!”

“We would first like to do our best because we are a new team, so our results are inconsistent for the moment,” Le Berre continued. “So we can do our best, but our worst also and it is hard for us to find our position. To stay in the French team for next year, we have to finish here in the top 8, which is a good goal for us. We can do it; it is hard but in our hands.”

Great Britain’s Luke Patience/Joe Glanfield also move up one place to third. “It’s just such a tricky venue,” commented Patience. “Every race we’re looking and trying to predict what we think will be the right thing to do and every race we’re not entirely sure. So today was really a big day to come out at the end of it and say we’re living to fight another day and we’ve not done anything too disastrous.”

From 2nd overall to 11th on the leaderboard for Paul Snow-Hansen/Daniel Willcox, as the Kiwis plummet from a 17, 26 and OCS penalty scoreline. Down go the Kiwis and up come the Greeks, with Panagiotis Mantis/Pavlos Kagialis ranking as the second most consistent team around the track today after the French. They scored a 5, 6, and 3, to leap up to 4th overall.

One of the youngest teams in the gold fleet are Israel’s Gal Cohen/Dan Froyliche, who won the bronze medal at the Junior Worlds last week and will be heading straight from La Rochelle to the 470 Junior Europeans which get underway in Pwllheli, Great Britain next week. They have launched themselves straight into the 470 senior fleet, where there is tough punishment for any errors.

“If you make a mistake, there is no comeback,” said Cohen. “You pay for it and that is it. We came here to learn. We are not in a stress or anything like this. We are not here to get a medal. We just want to learn and our aim is to get a medal at the Junior Europeans in Pwllheli.”

With two races to go, none of the current top 8 teams are assured of a place in the Medal Race line-up, so anything and everything could happen on Friday. More of the same weatherwise tomorrow, so a tricky day ahead.

Brazil’s Fabio Pillar/Matthias Melecchi have taken over at the front of the silver fleet, with Great Britain’s Tom Kinver/Ben Palmer leading the bronze fleet.

470 Women
Yesterday’s first day of finals was not quite what Olympic Champions Jo Aleh/Polly Powrie had planned as they slipped down the leaderboard to 6th overall. Back at the front today, they took the win in the first race, following up with a 2, 2 and ended the day back on top.

“A slightly better day for us today,” said Powrie. “We started out well with a decent start in the first race, rounding the top mark in the first pack, then chipped away at the leaders to take the lead just before the last mark to the finish and win the race.” 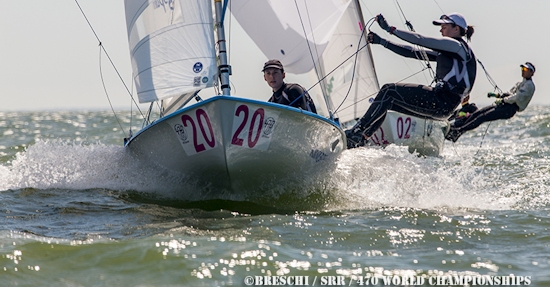 France’s 470 European Champions Camille Lecointre/Mathilde Geron were not quite as consistent today and drop to second place, 8 points behind the Kiwis. As with all of the top teams, they carry a double-digit discard, so will need to play it steady tomorrow.

Slovenia’s Tina Mrak/Veronika Macarol posted another strong series and remain in third overall, with Austria’s Lara Vadlau/Jolanta Ogar closing in behind them, on just a 2 point deficit. After the New Zealanders, the Austrians were the next best performing team with three top ten results of 7, 3, 6 for Lara Vadlau/Jolanta Ogar.

“We are happy as now we are still in the game. It was really hard races today for everybody, but great conditions and a lot of fun with the waves. The upwind was amazing and we will keep on going,” said Ogar. “The most important thing is to stay constant. Of course we really want to win the race, but we prefer to stay constant in our results.”

They were silver medallists at the 470 Europeans, although getting a World Championship podium finish will be an extra challenge, as more top teams have joined the fray for medal glory.

“It is different with more boats, and two fleets which meant different tactics at the start of the series,” said Ogar. “We can now fight with all the gold fleet, and there are some more really good teams here.”

China’s teams keep hold of their top ten places, but both crews have got knocked slightly down the leaderboard with double-digit scorelines.

A double whammy penalty for Olympic Silver medallists Hannah Mills/Saskia Clark who were over the line for the start of two of the three races today, and now find themselves back in 16th on the leaderboard. They face an enormous task to get back to the top 8.

“In terms of learning from our mistakes from yesterday and moving forward today, our decision around the racecourse were much better, we were thinking about things ahead of time which we feel we’ve been quite bad at this week,” said Clark. “Unfortunately in a three-race day we had two OCS’s. We actually felt like we’d sailed a really good day, but we’ve come off the water with one score and two loads of letters so not a great day. We’ve got two races left and we know we’ve just got to have a look at the scores really and see what kind of risks it might be worth taking to make the top eight for the medal race.”