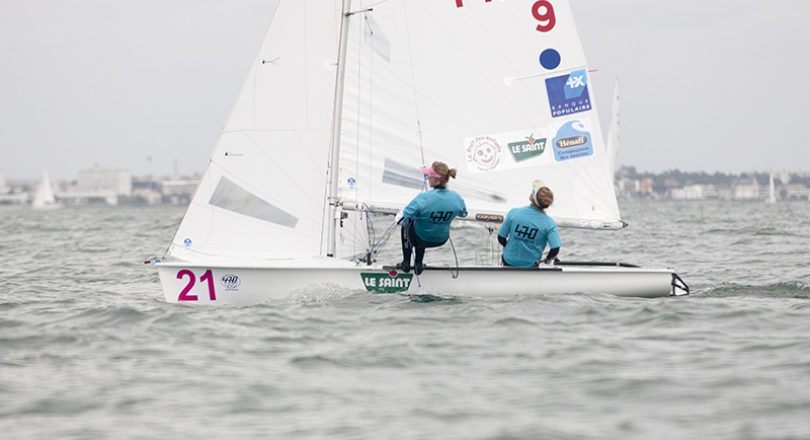 The 5 race qualification stage today decided the division of teams advancing to the gold, silver and bronze fleets for the finals stage at the 2013 470 World Championships. A light and shifty breeze kept teams ashore until mid-afternoon, with the first races getting underway around 1600 hours. The qualification stage discard kicked in after race 4, so some manoeuvring up and down the leaderboard, with race 5 the final opportunity for teams to push themselves to either consolidate or advance their positions ahead of the final stage fleet cut.

470 Men
Mat Belcher/Will Ryan did everything they needed to position themselves in first on the leaderboard by winning race 4, so opted not to sail race 5 and headed back to shore. The pair advance to the final stage of racing with an optimum 0 point carry forward scoreline, as they seek to extend their run of event victories and achieve their first World Championship title together.

Second placed Pierre Leboucher/Nicolas Le Berre are amongst the many renowned French 470 sailors in the fleet, and the hopes of French sailing are stacked in favour of this pair to be amongst the medallists come Saturday. Leboucher finished with the silver medal at the 2012 470 Worlds and represented France at the 2012 Olympics with his former crew. Also pushing up the leaderboard today are the 2013 470 European Champions Sofian Bouvet/Jeremie Mion who move up to 4th from 8th yesterday.

Le Berre was in some pain last week due to a knee injury which made it doubtful whether the pair would be able to race. “We are happy because I was injured last week and it is good satisfaction for me to be here and have such a good beginning to the series,” he said.

“Yesterday was perfect conditions for 470, with planning upwind and 15 knots was great for us,” Le Berre explained. “Today there is less wind, but it has been really interesting for strategy and tactics. We had a good time on the water.”

Despite being a bit further back on the leaderboard, the team of the day award goes to Argentina’s Lucas Calabrese/Juan de la Fuente, the 2012 Olympic bronze medallists. The pair converted their lowly 54th place on the leaderboard going into the day, after a starting error gave them a penalty in race 2, to 14th on the leaderboard from two second place finishes.

“Yesterday was not a good day for us,” commented de la Fuente. ”Today, we had to two top fifteen results to make it through to the gold, so we are pretty happy. We now go to the finals, and with 7 races it is a long way to go still. Today was around 10 knots, so everyone was really racing close, but we managed to round the first upwind mark in the top 5 in both races and from then it was pretty clear for us.”

Similar to several teams, the pair have just returned from a training session in Rio de Janeiro, Brazil and arrived in La Rochelle only a few days ahead of the Championship.

The top 39 boats on the leaderboard advance to the gold fleet and are in contention for the podium places, with 39 teams in each of the silver and bronze fleets.

470 Women
The 470 European Champions, Camille Lecointre/Mathilde Geron from France, have moved into the overall lead and will carry forward a bonus 0 point scorecard into the finals stage which gets underway tomorrow.

Just behind them and advancing to the final stage with a 2 point position are China’s Xiaomei Xu/Chunyan Yu who finished in 7, 1 today. This pair were absent from the international racing scene after losing out on selection to represent China at the Olympics, returning with impressive form in January to finish in third at ISAF Sailing World Cup Miami and following up with a 5th at ISAF Sailing World Cup Palma.

Their training mainly takes place in China, and so far they are blasting the competition here in La Rochelle. “Our performance is as a result of our continued training,” explained Xu. “Our focus is totally on the starting line, to watch the conditions, wind speed, shifts and we focus to get a good start.” Practice makes perfect, and this pair delivered in race 5 leading the fleet from start to finish.

Defending World Champions Hannah Mills/Saskia Clark from Great Britain are up in third overall and wrapped up their qualification stage with a win in the yellow fleet. Wednesday’s first day of finals will be the first time they come face to face with the series leaders Lecointre/Geron, and with the top 27 women’s teams up against each other from tomorrow onwards, expect a few leaderboard shifts.

Sarah Cook, the 2012 Olympic rower who has jumped to sailing in partnership with 2008 Olympic gold medal helm Elise Rechichi from Australia, scored her first ever race win, which had a broad beam on her face. “I guess it is good to know we have the speed and have some good skills and can start to get a gauge of how far we have come in the last 9 months, since I changed over from rowing,” said Cook. “It is good confirmation for us that we are on the right track and we are happy to be through to gold fleet to start tomorrow.”

The pair have trained hard since the 470 Europeans which took place in Italy in mid-July, including onsite training in La Rochelle over the past three weeks. “We have improved massively since Formia,” continued Cook. “I think for me now I have a good handle on most of the tasks and what we are trying to achieve at certain moments, so that was the key to get my confidence up so that I would know what we are trying to achieve on every point of the course. As it turns out, my feel has been relatively good from the get go, so to now get the results is really exciting for us.” The team advance through to the finals stage in 12th on the leaderboard.