The opening day of racing for the 470 men’s fleet at the 2011 Perth ISAF Sailing World Championships dawned sunny and almost windless, before picking up to deliver four races and four different race winners in light and shifty conditions – an early indicator of the depth of talent in the 470 fleet. 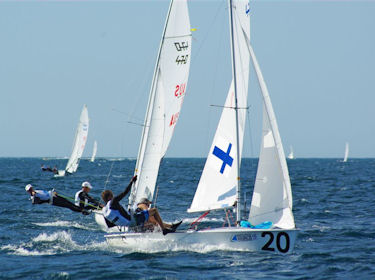 The 80 strong 470 teams were split into two fleets, yellow and blue, with today’s fleet assignment based on the ISAF Sailing World Rankings. After today, the fleets will be split for the qualification series based on the previous day’s performance. Six races are scheduled to make up the qualification series, with a further four for the final series, followed by the concluding medal race on Sunday 11 November. With 75% of the nation places at the 2012 Olympics being determined here in Perth, the intense racing goes beyond World Championship glory. As host nation of the 2012 Olympics, Great Britain automatically receives an entry to each Olympic sailing event, but that certainty however does nothing to ease the challenge for the British 470 men teams aiming to be selected to fill that spot. Conversely, their teammates Hannah Mills/Saskia Clarke have already been selected for the Olympic startline in the 470 women event. The remaining 7 nation places from the 27 total available for the 2012 Olympics will be decided at the 2012 470 World Championships in Barcelona, Spain.

After a postponement afloat, racing got underway just before 1400 hours on the Success race area, which is set to the south west and about 4.5km from Fremantle’s Fishing Boat Harbour entrance, with wind ranging from 8-12 knots over the four races.

The opening performance of the day went to Joonas Lindgren/Niklas Lindgren (FIN) who creamed the yellow fleet from start to finish, reminiscent of the impressive form they showed in the penultimate race at the 2011 470 Europeans in July this year. Finishing over half a minute behind were Gideon Kliger/Eran Sela from Israel, who were just a few seconds ahead of Tetsuya Matsunaga/Kimihiko Imamura from Japan. Bets were on for a repeat performance from Finland’s Lindgren brothers in race 2 as they led the fleet around the course, but their target was grabbed by defending World Champions Mat Belcher/Malcolm Page (AUS), who had clawed their way back through the fleet and overtook the Finnish team just before the turning gate to the finish line and took victory with a 5 second lead.

“Heading into the worlds there’s a lot of anticipation, a lot of training and then finally day one comes around,” said Belcher. “It’s always good to get the first day out of the way and today we came away with a nine and a first so they’re both keepers. It was a difficult day but we’re happy with where we ended up."

Belcher continued, “It’s going to be a long week. The expectation was that we were going to get a lot of breeze at this regatta, but that’s not going to happen for us, maybe next week, so it’s going to be very difficult and we’ll have to fight for every point because you’re certainly going to be put in a position where it’s difficult but you can only deal with the cards you get and try and make the most of it.”

Into race 2 for the blue fleet, and a fifth place in race one was upgraded to a race win in race 2 for Luke Patience/Stuart Bithell (GBR), whilst the Kiwis had to settle for a ninth place. Reigning 470 European Champions Sime Fantela/Igor Marenic of Croatia came in second with Italy’s Gabrio Zandona/Pietro Zucchetti in third.

Snow Hansen put their opening win down to, “a good start and getting onto the lift to tack first and a lead from mark one,” but added that, “it was really the first downwind that we got a bit of space to work with and it was pretty easy from then on. It was a lot easier at the front in race 1 than in the second race when we were in the middle!”

Fighting for Olympic selection, it is solid sailing that the British pair need, as Luke Patience commented, “It was a good day for day one of the Worlds. In everyone’s mind the aim on day one in these major competitions is not to make any mistakes and come away clean and certainly not pick up a discard and we have effectively done that and come away with some low points. We can’t be much happier than that really.” On their approach to the Championships, Patience surmised, “We are open minded in that we haven’t thrown all our eggs in one basket in terms of equipment or body weight and Stuart and I are more than happy to win and race in any conditions and so today was one of those days.”

The Olympics are beckoning for Italy’s Gabrio Zandona/Pietro Zucchetti as they have already won the Italian selection trials and if they can finish in the top 19 nations here in Perth, they are certain to be on the Olympic start line. A 8,3 scoreline in the blue fleet to end the day in sixth overall put a smile on the face of Zandona, “It was a nice day, but in both races we lost some positions in the last downwind leg. It wasn’t easy racing as the blue fleet was a very high level fleet with lots of ex-World Champions. It’s OK though, we have 10 points from two races – we are very happy about that.” And on the heat in Perth, “It is very hard when it is so hot, it is very complicated. Today we drunk maybe four litres of water each. We finished all the water in our boat and the coach boat.”

Racing continues on Tuesday 6 December 2011 with two races scheduled for each fleet on Success course area, with the yellow fleet scheduled to start first at 1230 hours.