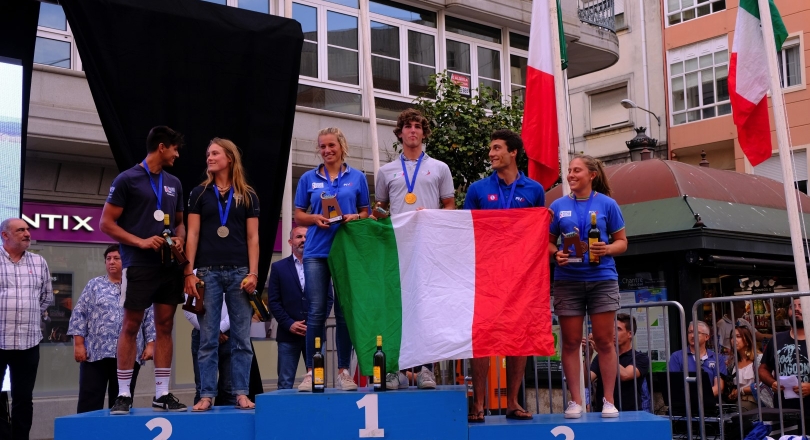 Mixed teams were welcomed for the first time since 2012 at the 470 Europeans in Sanremo last May and at the 470 Junior Worlds in Portoroz in early July, but it was at the 2019 470 Junior Europeans that the first official 470 Class title was awarded to Mixed teams, 17 of them competing in the beautiful Galician waters off Vilagarcia de Arousa.

The first Mixed 470 Class Champions after the selection of the 470 as the equipment for the mixed two-person dinghy event at the Paris 2024 Olympic Games are:

Andrea and Alice also won the bronze medal in the Men/Mixed overall category, clearly showing the high performance level and the intense training the new mixed teams are putting into as well as the consistency they showed throughout the week. This kind of success was narrowly missed by the second Italian team, Maria Vittoria & Bruno just three weeks ago, finishing seventh in a 53-strong fleet at the Junior Worlds and being into podium positions up to the last days of racing in Portoroz. And while these sailors can be considered 470 veterans, having raced in many championships before, one can only pay respect to Vita Heathcote, who came to the Junior Europeans fresh from her victory at the 420 Women’s Worlds in Portugal and ended up with a silver medal in the mixed category and the ninth position overall, having flirted with top positions during the week in her first 470 championship! She is joining Alice -2016 420 Women’s World champion- and Maria Vittoria -2016 bronze medallist at the 420 Worlds, and so many other 420 champions who have transitioned succesfully into the 470 Class.

Heading into the future: our mixed teams’ numbers are growing steadily, hopefully next year we will see the first senior mixed teams competing at the Worlds and Europeans as well. From 2021 the Mixed 470 will be an Olympic event and the main 470 championship title to be awarded, in parallel with the ‘open’ division in which men or women teams can continue racing 470s.

For info and results: http://2019junioreuropeans.420sailing.org/