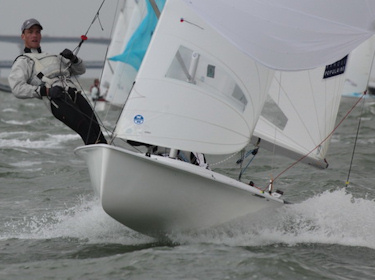 Sofian Bouvet and Jérémie Mion both had go-faster haircuts yesterday in streamlined readiness for their defence of the 2010 470 Junior European Championships in La Rochelle.

The haircuts worked nicely in today’s moderate breezes, with the French team winning both of their qualifying heats on their side of the draw, Yellow Group. Currently the 87 boat fleet is racing in two flights to determine who will go through to gold and silver fleets for the second half of the regatta. Local La Rochelle crew, Berenger Balzeau and Mathieu Fountaine were almost as dominant in the other qualifying fleet, Blue Group, with scores of 2,1.

Today the wind started at 12 knots and built to 15 knots during the day, and shifted from a westerly direction by 40 degrees towards the north, making for a difficult day for the race committee. The strong tide also played its part in the drama, with an upwind current driving seven boats over the start line early in the first heat of Blue Group, resulting in black flag disqualifications. Among the casualties was the German girls’ team Victoria Jurczok and Josephine Bach, attempting to defend their Junior European title from last year.

Coming ashore, Jurczok did her best to look cheerful despite the fact that she has given herself a mountain to climb simply to get into the gold fleet. A race finish of 26th combined with that black flag disqualification in the first race puts the Germans in 70th overall. “I don’t think we can win after today,” she smiled sadly. “We have started this regatta so badly.”

Jurczok and Bach’s training partners, and the 2008 winners of this regatta, had a better day, although Annika Bochmann and Anika Lorenz were still disappointed to be in 41st overall and some way back from the leading girls. Currently topping the girls’ rankings are the Dutch girls Rosita Bakker and Jeske Kisters. “We liked the strong wind today,” said Kisters. “It feels a bit like sailing on the Ijselmeer,” she said, even though the Ijselmeer is an enclosed stretch of water while here in La Rochelle they are racing on the Atlantic Ocean.

For Frances Peters and Eilidh McIntyre, their race started at 1600 hours yesterday afternoon when they sailed ashore at Weymouth in England after competing at the Skandia Sail for Gold Regatta where they finished 36. The girls drove straight to Dover, crossed the English Channel to Calais, travelled all through the night and, more than 500 miles of driving later, arrived in La Rochelle at 1000 hours this morning. For Peters, just three hours’ sleep was the least of her problems as she encountered ‘measurement nightmares’ trying to get her 470 race legal.

After running around looking for corrector lead to get her rudder up to weight, the British team launched off the slipway at 1300 hours, the scheduled time for the start of race one. “Luckily for us there was a postponement and some general recalls,” said Peters. “We got to the start line with five minutes to spare.” With steady scores of 14,15 from their fleet, they lie 2nd overall in the girls’ division, just three points behind the Dutch.

Although the wind was not that strong today, many of these young teams, aged 21 and under, are light for the 470. So the predicted lighter breezes would be very welcome for a number of competitors tomorrow.