The damp and variable wind conditions that have persisted so far in the 2012 470 European Championship continued for another day. After a waiting game for the breeze to improve, the fleets were sent out and racing started 90 minutes later than scheduled. 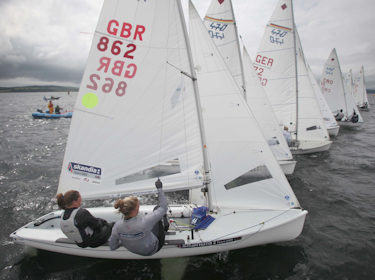 A delay between races 9 and 10 was a further test for sailors, as a super tanker was re-routed close to the racing area, due to the grounding of another ship further up the coast.

Race day 5 was about hunting out your wind track, in what were some of the most testing conditions so far in the Championship. A 10 knot northerly, with significant shifts and pressure changes across the course, made sure no teams were able to dominate the day’s two races.

The series leaders going into today, Sime Fantela/Igor Marenic (CRO) in the 470 Men and Sophie Weguelin/Sophie Ainsworth (GBR) in the 470 women maintained their yellow leader dots at the end.

470 Men
Two races and different teams in the top three each time, more than enough evidence enough of the tricky racing.

Race 9 was a fantastic result for Canada’s Olympic pairing of Luke Ramsay/Mike Leigh, who punched through the start first, led up to the windward mark and took control of the race.

“In the first race today we got a little flushed at the start, but then Mike did a really good job calling tracks upwind. It was difficult, especially with all the cloud cover and stuff moving in. Sometimes you think the really dark spots on the water are pressure coming in, so you might sail over to them but not get what you expect as they are rain clouds. Our speed was really good around the course. We rounded the first windward first and then it was a loose reach so we were able to extend and gybe set around the reach mark and from there we were able to extend and just get further and further ahead. It was then plain sailing and we won by at least the reach leg – so that was good,” smiled Ramsay.

The team have been testing settings, and a race win was the deserved bonus, as Ramsay explained, “We had the boat set up well today and it felt just an easier sail. Set up is something we have been working on and made a priority and it has obviously gone a lot better, so we are really happy about it. It feels good to be moving up!” 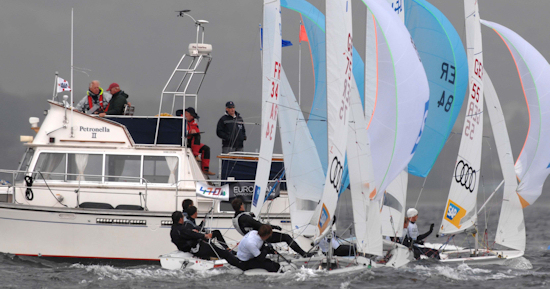 A great show of form again for the young Greek helm of Antonis Tsimpoukelis, racing with Olympic campaigner Pavlos Kagialis. They finished race 9 in second and shifted themselves up the leaderboard and ahead of Greece’s Olympic team, Panagiotis Kampouridis/Efstathios Papadopoulos. No hard feelings here though, with Kampouridis/Papadopoulos respecting the younger helm’s skills.

“We know Antonis from racing in Greece. Whenever he was racing he was always coming third with his crew. Now he has taken a great crew in Pavlos, and a great boat, and is achieving a high level. They are having fun with not too much anxiety and sometimes sailing is like this, you have to be relaxed. It’s OK they are ahead of us, although we have to improve as we have made a lot of mistakes,” reflected Kampouridis.

Redressing the Greek power balance, Kampouridis/Papadopoulos finished second in race 10 to position themselves in seventh overall by the end of the day, on equal points with their teammates but losing the leaderboard advantage on tie break.

The Russian brothers Mikhail and Maxim Sheremetyev have being making a steady advance up the leaderboard, and were up to second overall by race 9 and on equal net points with the Croatians. A bit too close for Fantela/Marenic who are focused on defending their European Championship title and hit back with a win in race 10. A tenth place for the Russians now pushes them nine points in arrears of the Croatians. 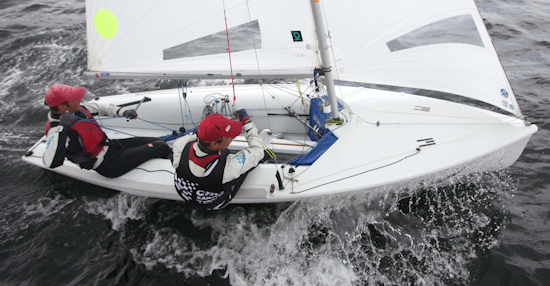 With Russia edging up to second overall, Great Britain’s Ben Saxton/Richard Mason moved down to third after what they described as an ‘awful’ Monday’s racing.

Eight different nations are represented in the top 10 in the 470 Men fleet. Two more races tomorrow will determine the top 10 teams going through to the deciding Medal Race on Wednesday. All teams not in the Medal Race will sail a final race.

Major disappointment for the German Olympic team of Ferdinand Gerz/Patrick Follmann who were fourth overall at the end of yesterday’s racing, but have had to pull out of the Championship due to injury, as Follmann damaged his thumb returning to shore after yesterday’s racing.

Together with Slovenia’s Tina Mrak/Teja Cerne it makes for a very tight knit group of three at the top and the prospect of a thrilling medal race on Wednesday.

Race day 5 was described as a ‘snakes and ladders’ day by Ainsworth, with lots of chopping and changing in positions but no knock-out performances from the leaders, with the race wins claimed by Anna Burnet/Flora Stewart (GBR) and Enia Nincevic/Romana Zupan (CRO).

Burnet/Stewart, the only all-Scottish crew competing in the Championship, decided not to follow the rest of the fleet at the first windward mark and make one of those calculated but risky decisions which for them paid off as they clinched race 9 victory.

“When the whole fleet gybed off at the windward mark I made the call to keep going straight before we gybed, then we went low and sailed around everyone in front of us,” said Burnet, then adding, “We were first then so we knew we had to just keep in front of the other boats. It was quite shifty and so it was difficult to keep on top of all the boats when they were going in different directions. The Germans were right behind us, but we came out ahead at the windward mark and kept our speed up to stay ahead. It was very satisfying to win our second race.” 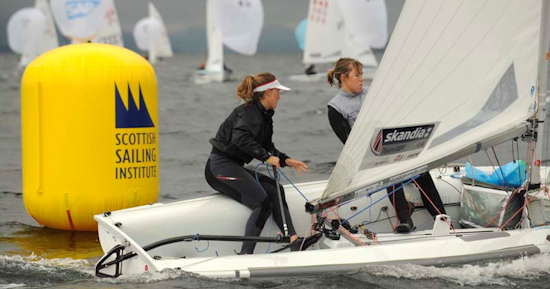 Equipment failure blighted race 9 for Slovenia’s Tina Mrak/Teja Cerne and helped contribute to their tenth place finish and worst result of the Championship.

“It was shifty and in the first race we had a bad start, and then the chock of the mast broke, so we had a few problems. We couldn’t point as high and half of the upwind we were sailing without the chock. We managed to fix it in the downwind by using the tow rope. In the second race we sailed better and had sorted it out,” said Cerne.

The Slovenians’ plan to position themselves for the Medal Race is simple, as Cerne explained, “For tomorrow’s two races anything can happen. We will concentrate to do our best and just get two good results.” And on the younger talent, commented, “Of course we want to pass them. But if they are better than us, we can only congratulate them.”

Nincevic/Zupan’s win in race 10 keeps them in fourth overall on the leaderboard, but still 18 points adrift of the third placed Slovenians. It will be a big ask, but if the leading three teams have off days and the Croatians are able to dig deep tomorrow and secure two more top finishes their hopes of a podium finish will still be alive.

Sophie Ainsworth gave her thoughts on their strategy for race day 6, saying, “We are all so close on points, so you have to be wary of getting separated from each other but we want to make sure we go into the medal race in a good position.”

Steve Irish, coach to the Sophies, gave his verdict on the day, “It is obviously really, really close and after a whole day’s racing not a lot has changed, which is disappointing, but I guess it keeps the racing alive for tomorrow. I think it is quite interesting now as there are the three out in front and they are all watching each other. From the Sophies’ point of view they’ve got to make sure they don’t take any major risks and drop some bad results in tomorrow, but also if they get the opportunity to try and at least get a few points between them, they will.” 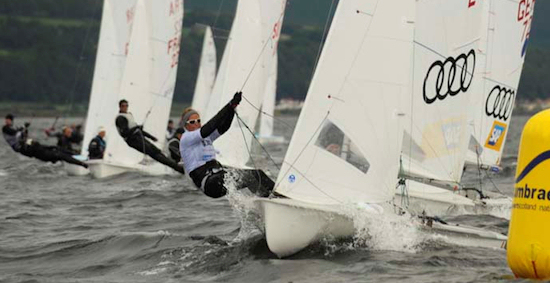 Another great day for the British 470 teams, all of whom are now positioned in the top 10.