Day 2 of 470 racing at the Perth 2011 ISAF Sailing World Championships dawned wet and grey, before the weather demons took over completely to deliver rain, thunderstorms and severe weather warnings which forced the Race Committee to abandon racing for the day. 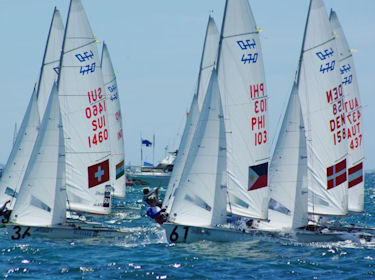 The advancing storms were forewarned at the morning’s Team Leaders meeting, although at that stage it was hoped they would pass through, but at 1350 hours racing was officially abandoned. The threat to safety due to the electrical storms was the primary reason for abandoning racing. "Safety was the ultimate concern today," Competition Manager Skip Lissiman explained. "The electrical storms posed too big a danger to sailors on the water.”

With the series now two races behind schedule, the racing programme has been revised with Thursday’s reserve day also set to be called into play. Six races are scheduled for the qualification series, which determines the split of the 80 boat fleet through to the finals stage, with the top 40 teams qualifying through to the gold fleet and a chance at Sunday’s medal race and the other 40 going through to the silver fleet. The Race Committee plan to start all fleet racing tomorrow at 1200 hours and schedule three races, which should then deliver five of the six races scheduled for the qualification series. Thursday may then be used to complete race six.

Forty different nations are represented in the eighty strong team 470 men fleet, numbers which are slightly down compared to usual attendance levels at 470 World Championship due to the sheer logistics and costs involved in travelling to Perth. But equally, the location has attracted new teams to the World Championships, such as Ridgely Balladares/Chavez Rommel from the Philippines. The team are fresh from a silver medal in the 470 men’s event at the South East Asian Games, and again showed their form with some great starts in yesterday’s racing.

Balladares/Rommel are one of 15 teams in the 470 Men and 470 Women events benefiting from the provision of charter boats through the Development Programme run by the International 470 Class Association. Eight brand new Mackay 470s arrived in Perth direct from the builder in New Zealand to be first used for the 470 Men’s event before being transferred to the 470 Women. 470 men’s teams using the 470 Class charter boats are:

For Puerto Rico’s Raul Rios/Gerardo Fernandez competing here in Perth marks a big step up into elite 470 competition. Whilst Rios/Fernandez are sailing at their first ISAF Worlds, Rios has competed at three ISAF Youth World Sailing Championships, and the team aren’t fazed by the level of competition here, ending day one in 66th overall. “There’s a big difference here in Perth, especially moving from youth to Olympic classes,” said Rios. “Here we have professional sailors and they are some of the best in the world. Our goal is to qualify for London 2012. I’ve been sailing Snipes up until the end of October because I was at the Pan-American Games so now it is full 470 and try here in Perth or in Barcelona to qualify for London.”

Racing is scheduled to resume tomorrow at 1200 hours on the Success course area.