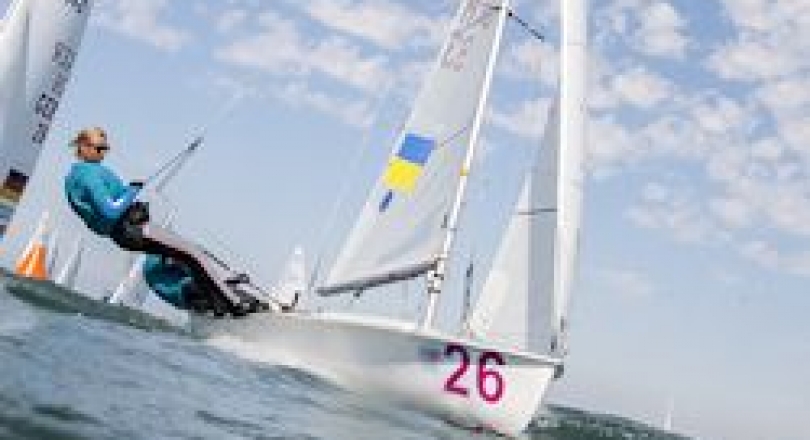 Starts at opposite ends of the day for the Junior Worlds and Masters' Cup fleets in La Rochelle, with the junior fleets benefiting from the early morning breeze, and a more sedate start for the Masters in the afternoon

After yesterday’s racing was called off due to lack of wind, the Race Committee made the call to take advantage of the morning breeze to get back on schedule and it was an early start for the 470 Junior Worlds fleets with the women up on the race track and underway at 0930 hours.

Following the women round the track, were the men’s gold fleet and then silver. Clean starts for the opening races of the day, before the wind dropped and changed direction, becoming shifty and unstable.

Orhan Tuker (TUR), 470 Class Course Representative for the 470 Junior Worlds is responsible to oversee the racing for the Junior Worlds, “We needed to get back ourselves back on track today, so with a forecast of breeze in the morning got racing underway at 0930. We completed the races as planned. It was a challenging day to get the last two races underway in the light and shifting wind, but we have a great race management team here who delivered a fair day’s racing.”

The wind out on the race track at 0930 hours was a stable 12-13 knot breeze, with the wind decreasing to about 6-7 knots for the final two races. The Masters’ Cup and Open Classic fleets took to the water for their scheduled start at 1400 hours.

Racing for all fleets is scheduled to get underway at 1400 hours on Friday 2 August 2013. The Juniors Worlds men fleet are scheduled to have three races, the Junior Worlds women two races, with the top eight on the leaderboard after Friday's racing advancing to the Medal Race on Saturday. The 470 Masters' Cup and Open Classic fleets are scheduled to hold 3 races to complete their events.

470 Junior Worlds – Men
The format for the 470 Junior Worlds men's fleet is a 5 race qualifying stage, with the teams then carrying forward their qualifying position on the leaderboard into the gold and silver fleet finals stage. Race winnners get the advantage of a zero points score, with second awarded 2 points, third gets 3 points, and so on. 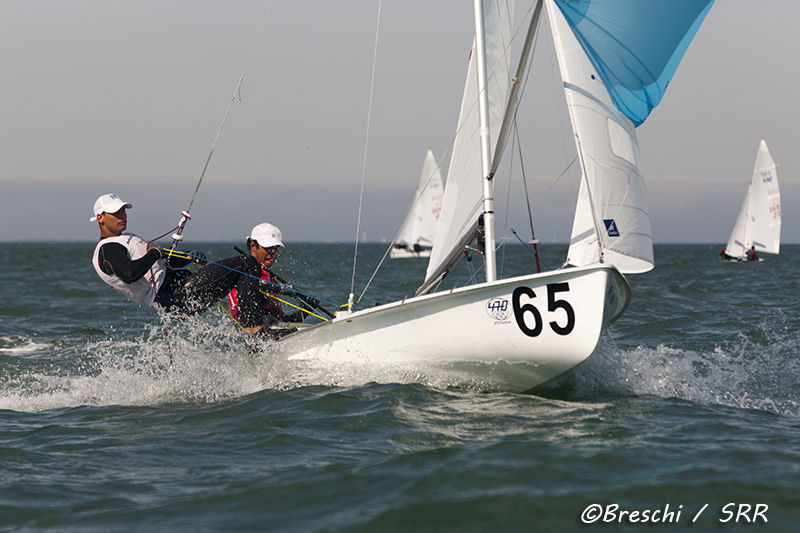 Leading the gold fleet into the first race of the final stage this morning were Pierre Quiroga/Clement Pequin, but it was Italy’s Matteo Capurro/Matteo Puppo who scored the opening race win and followed up with a 4th in the second race to move up to first overall. The final series discard kicked in after the third race of the day, so despite a 21st finish, the pair remain in first overall, with Quiroga/Pequin in second. In third overall are Italy’s Francesco Rebaudi/Matteo Ramian. 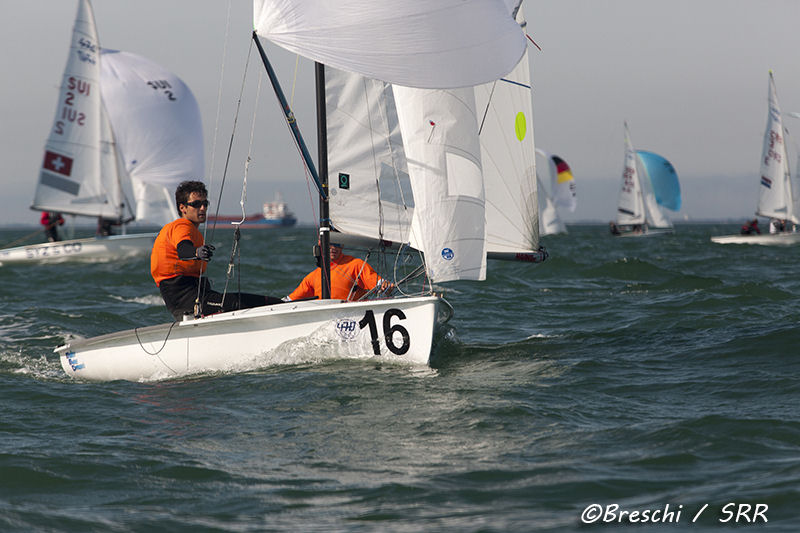 Consistency pays and Israel’s Gal Cohen/Dan Froyliche pushed up the leaderboard with a 7,1 to third overall, up from 17th going into the day. A win in the day’s closing race, could not take them any higher, as the discard kicked in and as they are not able to discard their “carry forward” result of 17th from the qualifying stage, are held back in fourth overall.

As a combined achievement across the men’s and women’s fleets, Israel’ s junior teams excelled today. Eran Sela, who competed in the 470 at the 2012 Olympics, coaches the junior teams, in a role not unfamiliar to him as prior to his Olympic campaign he coached 420s. Explaining what he brings to the role, Sela said, “With the things I know about the 470, it was very easy at the beginning of the year to teach them about the technique and the small secrets of the 470.” On the success of their campaign so far, Sela continued, “With the boys we have been to Hyeres and the 470 Europeans, and for the girls this is their first ever international event. The boys have also been at a training camp in Greece with the Kavas brothers, and the Italian 470 team Simon Sivitz Kosuta and Jas Farneti have also been training in Israel. Next year, we plan to have even more boats in Israel training with us.” 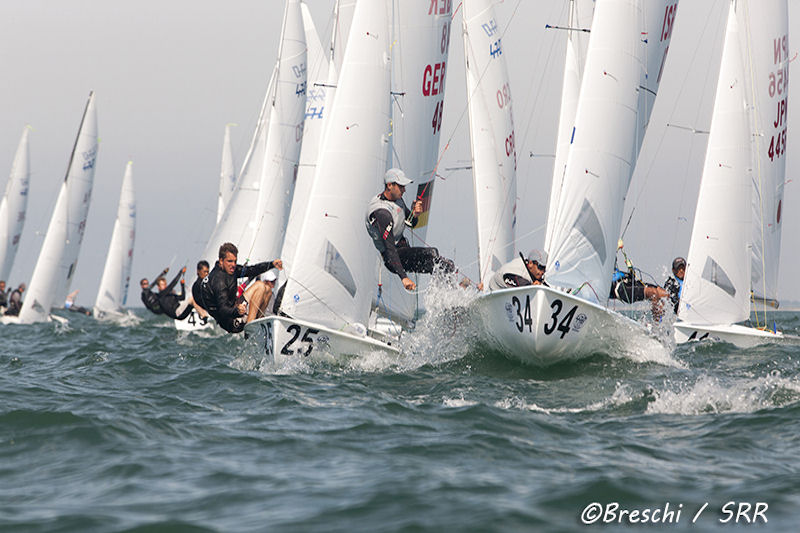 Looking ahead to the team’s potential, Sela said, “They are amazing and very young. They finished 8th in the 470 Europeans, which was a very impressive result. We aim for the Olympic Games in Rio, but they need to learn and understand the boat completely and develop as professional athletes.”

Seventeen year old Cohen has been sailing the 470 for a couple of years, and partnered with Froyliche last year when he stepped up to the 470 from the 420. A great day of racing drew a smile from Froyliche who said, “It is always hard out there, but when it goes well it just goes well!” They only arrived two days ahead of the Championship, and have taken time to adjust to the conditions here. Cohen relishes the challenge of the 470. “It is a sophisticated boat, it is not a regular boat. There are lot of elements you have to control and master to sail the boat well, and I really like that,” he said.

Two-time ISAF Youth World Champion in the 420 Class in 2010 and 2011, Jordi Xammar from Spain is competing with crew Joan Herp, with whom he secured his 2010 Youth Worlds victory, and so far results on the water are all top ten. “We are happy with our speed now. We were having problems around the course and at the starts, but today we did well,” Xammar commented. “We were not sure on the start, being too careful for OCS, the other boats, the current, but today we just said let’s start like always and do what we know. Our coach changed our configuration on the sails and we had really good speed in the last two races, so our thanks to him.” The pair are up to 5th overall and sit just 2 points off third place. 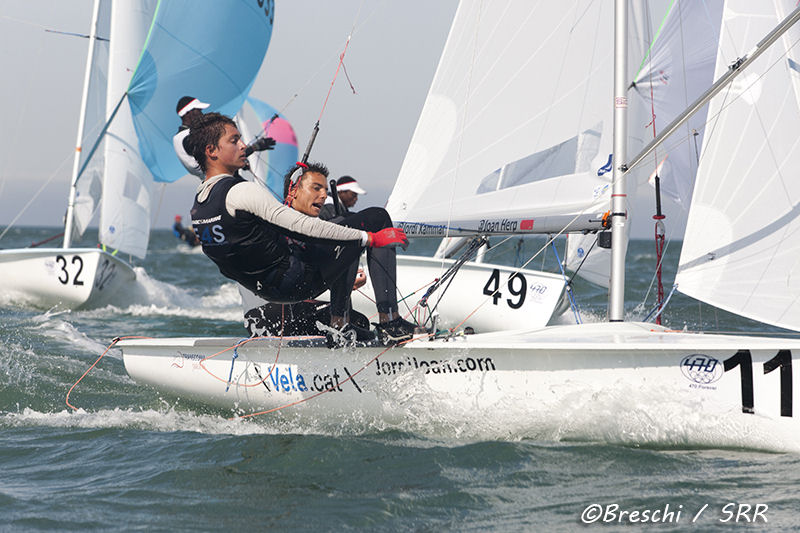 The Junior Worlds line-up is full of adversaries whose paths have frequently crossed during their young sailing careers, a challenge which Xammar enjoys. “I really like racing against the people I know from when I was 12 years old at Optimist Worlds and Optimist Europeans. On the water though there are no friends though as we all want to win, but yes off the water we are really good friends.”

Taking in the 470 personalities around the boat park, Xammar continued, “When we arrived it was really special to see the gold 470 logo on the sail of Mat Belcher and I think how I want to be like him. Then yesterday it was great to talk to Malcolm Page and other people who I can learn from. If we qualify for the gold fleet at the Worlds, we will get to sail with sailors like them – that will be just perfect.”

470 Junior Worlds – Women
The women were up on the race track first today, and counting the two race wins from Tuesday’s races 4 and 5, Ukraine’s Anna Kyselova/Anatasiya Krasko made it a hat trick with another win in race 6 to close the gap to series leaders Maelenn Lemaitre/Aloise Retornaz (FRA).

Lemaitre/Retornaz have not released the yellow leader bibs and it looks as though the Championship will turn out to be a battle between these two teams. The Ukraine pair are 4 points off first, with the third placed pair Tsuf Zamet/Lia Biran from Israel a massive 32 points behind them. 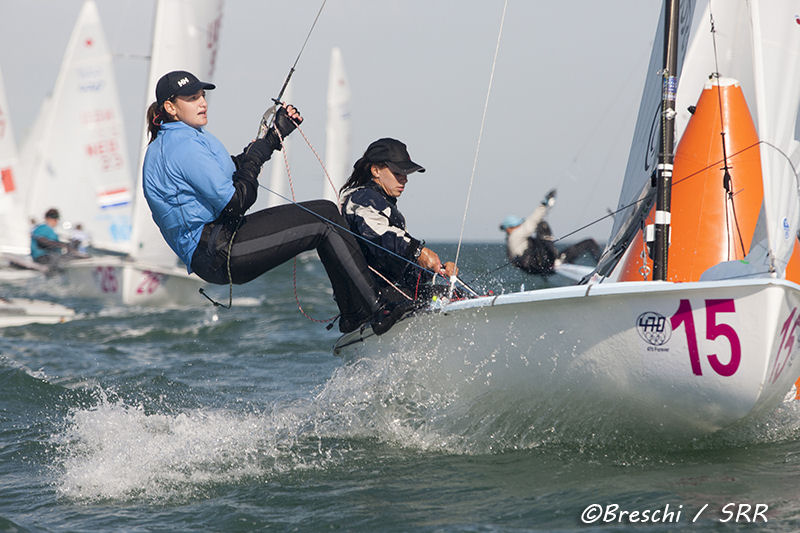 Zamet/Biran delivered a consistent day. “We thought it would be much longer on the water today, but actually it was not too hard,” said Zamet. Their closest push to claim a win came in race six when they had the lead in their hands during the second upwind leg, but were overhauled by Kyselova/Krasko downwind.

“It is fun to be here,” said Biran. “We were afraid that we would not be so good. But we are being coached by Eran and he is the best.”

Lemaitre/Retornaz have been sailing together for 6 years, and represented France at the ISAF Youth Worlds, securing bronze in 2010, before making the step to the 470 as they strive towards their Olympic dream. “We have been the Junior European silver medallists,” said Lemaitre. “The level in the 470 is really high, because the best sailors who want to go to the Olympics race the boat.” 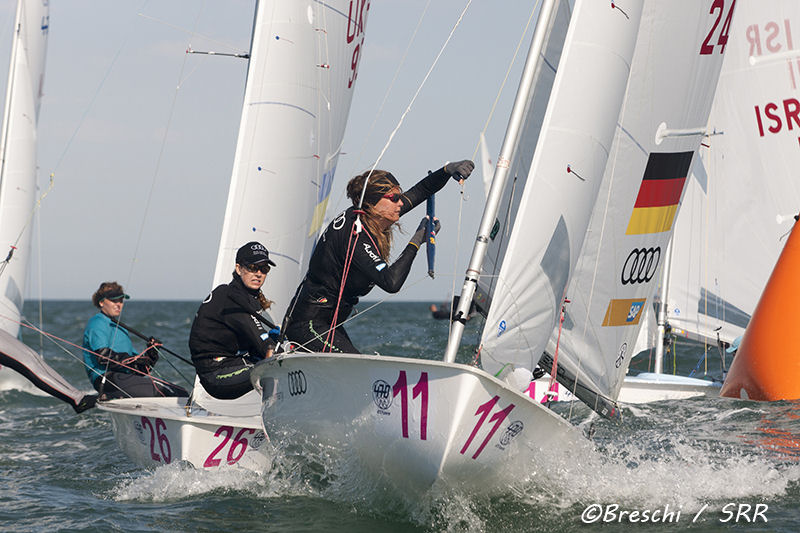 As the teams go into tomorrow’s final day of racing, the leaderboard points are moving closer, with the podium places all set to be decided in the final three races.

Iulia Fulicea/Paul Negoescu (ROU) continue to lead in the Apprentice Masters, but with their lead now reduced to a tiebreak advantage over Switzerland’s Rene Ott/Christian Sprecher.

Fernando Zicarelli/Davide Gamba of Italy have put together a string of six race wins over the eight races so far, dropping back to a fifth place finish in the final race of today in the Masters’ division. Whilst nothing is certain for this team, with up to three races scheduled tomorrow, based on performance so far, they are virtually certain of a podium finish.

In the Grand-grandmasters Switzerland’s Martin Steiger/Hans Vonmoos are closing in on their mission to defend their 2012 title, with just 6 points between them and leaders Robert Maurel/Gerard Daugey (FRA).