Every race is crucial, but with only five races left in the 2012 470 World Championships, race day 5 was a crunch day as teams positioned themselves to make the medal race cut, and the points started to stack up amongst the 470 Women teams in the challenge for Olympic qualification. 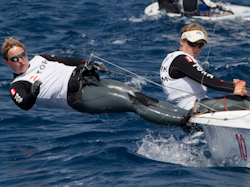 Another day of racing being postponed, waiting for the breeze to fill in, with racers sent out at 1400 hours.

A glory day for Denmark’s Henriette Koch/Lene Sommer who, subject to ISAF ratification, left the venue tonight with Olympic qualification in their hands in the 470 women event. With a 5,14 scoreline today, they acheived a points advantage sufficient that it is impossible for any of the other five nations to oust them. No such safety net for the teams from Austria, China, Croatia, Poland and Russia who will be fighting to the end.

470 Women
Hannah Mills/Saskia Clark (GBR) took both race wins to leap up into first overall, but only just. On equal points with the second placed Lisa Westerhof/Lobke Berkhout (NED), their advantage is due to the tiebreak countback.

The Dutch are now delighted they chose to compete, having initially planned to focus on their Olympic training in Weymouth, as Berkhout explained, “We were first going to train in England and skip the Worlds, as we thought the conditions in Barcelona would be lighter breeze and we wanted to get the circumstances in Weymouth. But after a disappointing regatta in Palma we decided to have more practice in lighter breeze and shifty conditions.” Berkhout confirmed the team are now focused on winning in Barcelona, “We will take it race by race and a world title would be a nice thing to achieve again.”

Reflecting on the other team’s performances, and the game raise during Berkhout's 470 career, she continued, “The level has gone up and it is really climbing. Since 2001 people have got more professional, train harder and have a better understanding about the boat. That is why it is really intense racing at this moment in the girls’ fleet.”

In third overall are Jo Aleh/Olivia Powrie who again delivered a safe pair of results and another impressive race day. “I think this is one of the closest Worlds, with everyone fighting for every spot. They are quite tricky conditions here, you have to work hard to get out of the waves, but also keep your head out of the boat to see what is going on,” commented Powrie.

With the Danish now through and going to the 2012 Olympics, for the teams from the five nations still gunning for one of the remaining four qualification places, the fight is set to go to the bitter end.

After today’s races, the leaderboard for the five nations has Poland in 18th place with 115 points, the three Chinese teams in 19th, 20th and 23rd, Austria’s Lara Vadlau/Eva Maria Schmik in 24th and carrying 121 points, then Croatia’s Enia Nincevic/Romana Zupan in 25th overall on 122 points and Russia’s Natalia Ivanova/Diana Krutskikh in 26th place with 130 points.

Of the three Chinese teams trying to qualify China, Wang Xiaoli/Huang Xufeng are currently the top placed in 19th overall and are also ahead in the Chinese selection trials.

As the lowest placed team going into tomorrow, Russia’s Ivanova feels the pressure of their situation. “We are all so close and tomorrow will be a hard day for everybody with a lot of pressure. I think for us the plan will be just to make our best. We will not focus on somebody, because everybody is so close there is no one enemy with whom you have to fight. So we will try to do a good start and a secure result and that’s it. For everybody the Olympic Games mean a lot. You spend four years of your life preparing and if you don’t finally go it is a shame for everybody – very hard.”

It doesn’t get closer than this – and in the pressurised environment out on the race course all the teams must remember is to stay ahead of the others. No race wins are required here, just safe sailing!

Both the Croatian and Polish teams are hoping to make history by becoming the first teams to ever qualify their nations to the Olympics in the 470 women event.

The world #1 ranked team of Ai Kondo/Wakako Tabata had no automatic guarantee of Olympic selection, despite securing Japan’s qualification slot at the Perth 2011 ISAF Sailing World Championships, as teammates and world #14 ranked team Yuka Yoshisako/Noriko Okuma are chasing at their heels. The selection policy of Japan Sailing remains open to both teams, but it will be a tough call for Yoshisako/Okuma to meet the requirements that will sway the outcome in their favour, as they need to finish in the top three and Kondo/ Tabata place 15th or lower. Kondo/Tabata’s pedigree includes top 10 finishes at the past three 470 World Championships and a 14th at the 2008 Olympic Games. Yoshisako placed 11th at the 2004 Olympics, with a different crew, and has finished 17th or better at every 470 World Championships since 2003, except 2005 when she didn’t compete.

470 Men
Another one in the bag for Mat Belcher/Malcolm Page (AUS) in race 9, bringing their claim to a three-time World Championship victory even closer.

Finland’s Lindgren brothers almost took the gun in race 9, but wrong footed themselves, as Joonas explained, “We were leading until the last downwind but I made a big mistake at the bottom mark and I over stood the lay line quite a bit. A big mistake. It is a big question how it happened. We looked at the wrong mark and realized a bit late. The Aussies then managed to put some distance between us.“

Belcher/Page surely now have the World Championship wrapped up, but Belcher would not be drawn on that and said the team are just taking it one race at a time, “We are sailing well. For us the results are one thing and the performance another. We are synching very well together and our form coming into this event was very good, winning most of the events this year. It is nice and good recognition for our hard work. Today was a classic example where we fought our way back. We just chip away and pass the boats we can and it was fantastic to come away with a win in race 9. The last race was really rewarding, we rounded the first mark in 27th, but we chipped away and fought hard and to come away with a 5th is probably one of our best performances, to be able to come back through this quality of fleet.”

The French pair of Pierre Leboucher/Vincent Garos posted two third places, with their race 10 result put down partly to luck by Garos. “It was an important day for the boats that want to go through to the Medal Race. We were lucky to have the good side in the first race and in the second race we had a good start and then sailed into a shift and were 20th at the first mark. We then tried to do our best in the downwind and then after we went to the left upwind where there was more pressure and made a very good comeback to finish 3rd.”

Great result for Ferdinand Gerz/Patrick Follmann (GER) who sailed a perfect race 10 to take the win and are now in an improved position to try and qualify through to the medal race.

Decision day is dawning, particularly for the Greek and Japanese teams fighting for Olympic selection. It remains advantage to Panagiotis Mantis/Pavlos Kagialis over Panagiotis Kambouridis/Efstathios Papadopoulos by just 4 points. The margin is slightly bigger for Japan’s Ryunosuke Harada/Yugo Yoshida in 10th overall, with a 15 point margin ahead of the 16th placed Tetsuya Matsunaga/Kimihiko Imamu.

Two races are scheduled for all fleets on Friday 18 May, with racing scheduled to get underway at 1200 hours. The 470 men and Women gold fleets will continue to race on bravo course, with all other fleets on course area alpha.