Centre Course at Bather’s Bay was the host arena for the Men’s 470 gold and silver fleet racing today, providing fantastic access for spectators. 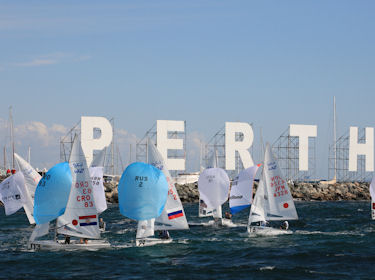 Racing a windward/leeward course format with the final reaching leg to the line taking the fleet close to the spectator stands, for the teams it was their first taste of the Medal Race format.

The Centre Course also presented new challenges for the racers as they were faced with a build-up of waves at the downwind gate, which is positioned close to the beach inside Bather’s Bay, and need to sail tighter angles downwind and shorter tacks upwind due to the harbour walls.

The 40-boat 470 Men Gold fleet were up first, with races 7 and 8 held immediately after each other. Meanwhile the Silver fleet were held ashore for their start immediately after. With 5 points separating the top three boats in the Gold fleet going into today, anything was possible, and surprises did unfold, but by the end of the day the same three teams held their positions on the leaderboard although the points margins had extended.

Australia’s World #1 helm and defending 470 World Champion Mat Belcher was clear yesterday that, “winning or losing is all about not making mistakes. The level of the field is so high here in Perth, one slip up and you are out of the race.” The Australians demonstrated perfection today to win both races with significant margins.

Race 7 started at around 1230 in a light 6-7 knot breeze and under black flag. Nicolas Charbonnier/Jeremie Mion (FRA) led the fleet to the windward mark and rounded first with the narrowest of leads over the Australians, whose superior speed saw them take off downwind ahead of the French. Charbonnier/Mion kept the pressure on all the way round the course, but by the second downwind leg they were too far behind to make any challenge to Belcher/Page who crossed the finish line almost a minute ahead.

A few seconds behind the French were Nick Rogers/Chris Grube (GBR) in third, which pushed them up to fifth overall in the gold fleet after seven races, a leaderboard postion they were able to maintain after race 8 too. A fall and recovery from Luke Patience/Stuart Bithell (GBR) who found themselves back in 22nd overall as they went through the downwind gate for the first time, but smart racing over the remaining four legs of the race saw them cross the line in ninth overall.

After numerous general recalls, race 8 got underway but saw eleven boats disqualified under the black flag rule, including Gidoen Kliger/Eran Sela from Israel. The pair were the only team in the top 10 leaderboard going into today to find themselves on the wrong side of the line, a mistake they will sorely regret. Combine this with a disqualification in race 7 for a right of way incident and the pair go from within striking distance of the top three, to unlikely to make it through to the Medal Race on Sunday – a swift fall.

Belcher/Page started race 8 a few boat lengths down from the Race Committee end of the line and pulled off a superb start which they converted to an increasing lead over the fleet. This time it was the two British teams Nic Asher/Elliot Willis and Luke Patience/Stuart Bithell who were in hot pursuit, not only with the Australians but also with each other as every race counts for them as they fight for the nod from the British Olympic team selectors. From being neck and neck at the last rounding of the windward mark, Asher/Willis chose the best side of the course on the last downwind and finished in second with Patience/Bithell just behind in third.

World #2 ranked team Panagiotis Mantis/Pavlos Kagialis (GRE) have not had an easy time preparing for this Championship, and after a delay in the arrival of their container had only one day to train out on the water. A solid start to their series has been offset by some double digit results today, which sees them drop down into eighth overall. They lost three places between the last gate and finish line as Kagialis explained, “The sheet came off the pole and we decided it was not good to put it back again and we lost the three places. We tried a lot in this race. We had a bad start and had to take a two-turn penalty and we passed the first mark in last place and we caught up. But unfortunately we lost these three places for no reason. Things are not going how we wanted them to go. With a good day tomorrow we can do something.” But Kagialis was more positive on the grandstand format, commenting, “We waved at the crowd – it is nice, I like it.”

Belcher/Page have now amassed six race wins from eight races – which must be an unprecedented scoreline at a 470 World Championship. They are surely unstoppable now, although coach Victor Kovalenko remained reserved in predicting the outcome of this World Championships, “The regatta hasn’t finished yet and yes it is quite good results in terms of scores on the board.” Kovalenko would not be drawn on whether the team has the potential to wrap up the regatta with three more race wins and laughingly said, “I don’t think so!”

Commenting on their performance, he continued, “They are sailing a little bit different from others. I have heard today from a sailor on the grandstand that they think their style is definitely very good and different from the others. They are a little bit faster downwind and their positionary game is really good. I am very proud. When I see them leading I am really proud and am really proud of all our team. I hope in three days we will be alright because all the others will fight very hard.”

2008 Olympians and world #5 ranked team of Stuart McNay/Graham Biehl find themselves up in tenth at the end of today and hoping to hold or improve this position to make the Medal Race cut after tomorrow. Wanting a bit of the Belcher/Page magic, Biehl said, “You know I really think that they [Belcher/Page] just tend to stay out of traffic and sometimes might have an edge of boat speed over some of the other boats, so they are able to pick their lanes a little bit better. I know our starting at this event has not been the best, whereas at the last two events we had we were really good with our starts. With starting being such a premium we are finding it a little difficult to race. If we get that in line we will be right up there with them.”

After the fleet split, 24 nations are fighting for 19 Olympic qualification places in the 470 Men and tomorrow’s races 9 and 10 will decide which nations seal their place at the 2012 Olympic Sailing Competition. At the end of today, Russia, Switzerland, Korea, Ireland and Slovenia are outside of the top 19 nations and tomorrow is their final opportunity to qualify from this event.

Races 9 and 10 for the 470 Men Gold and Silver fleets will be back on Success Course area tomorrow, Saturday 10 December, with Gold fleet race 9 scheduled to get underway first at 1230 hours local time.