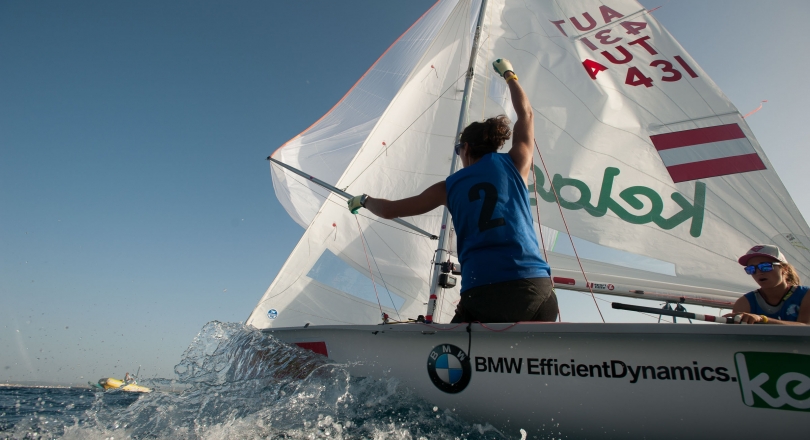 All change on day 3 at the 470 World Championships in Haifa, Israel as the series intensifies, places change and two new leaders take over at the front.

A stuttered start to today’s racing, with the 470 Women fleet getting underway after a general recall and several postponements. The light and variable breeze went from around 4 knots to a max of 8.5 knots, accompanied by the usual swell.

470 MEN
Sime Fantela/Igor Marenic (CRO) scored two second places to escape the shadow of overnight leaders Mat Belcher/Will Ryan (AUS) and give themselves a useful safety net of 11 points. An upset in race 6 pushed the Aussies to a 21st place finish, following up with a 15th in race 7 to end the day in second.

The Croatian partnership has been at the top of their game for many years and are well up to the challenge of winning the 2015 Worlds. Since claiming the 470 World Championship title in 2009, finishing on the podium has almost become a rite of passage, as they have placed in the medals at every 470 Worlds since, bar one exception.

“It’s really challenging,” said Fantela. “I don’t remember these conditions we have had ever. The Europeans was tough, but this feels like one level more up. It is a game that you need to fight to the end, to the finish line and then you are sure.”

Former Optimist World Champion Fantela and crew Marenic are already selected for the Olympics so now it is all about final preparations for Rio.

Sweden is also already qualified to the Olympics, but it is game on for the three teams racing at the 470 Worlds as they tussle to secure the ticket. Top 8 results are essential to get close to their national selection criteria, and a podium place will help tip the favour. So far so good for Anton Dahlberg/Fredrik Bergstrom on day 3 of racing as their 22, 1 scorecard boosts them to third overall on tiebreak with the Aussies.

Pavel Sozykin/Denis Gribanov of Russia have raced a super consistent series to sit in fourth overall.  They finished 5th at the 470 Europeans, so hold this place and it will mark a career best performance for the pair.

South Africa’s Asenathi Jim/Roger Hudson are currently on tiebreak with Israel’s Eyal Levin/Dan Froyliche as they both battle for Olympic slots. But ahead of them right now are teams from Argentina, Turkey and Korea.

Spain’s Rayco Tabares/Alfredo Gonzalez took out the race 6 win, which combined with a 6th in race 7 puts them in 15th overall. Three Spanish teams are competing, all hoping over the coming months to meet the formula which the Spanish Federation has set to decide the team for Rio. Currently leading the Spanish contingent in 5th overall are the young pair of Jordi Xammar/Joan Herp, who secured Spain’s Olympic qualification last year in Santander.

“We are not looking at the other Spanish teams at all. It is a World Championship and we want to do as well as possible,” explained Herp. “Our results at the Worlds will impact our funding for the coming season which is important, but results here won’t count towards the Spanish Olympic qualification. We feel we have really good speed and have been training many days here. Physically we feel good and we are confident for the next days. We don’t have a bad discard, so we just have to do three top ten races and we will be in the Medal Race.”

In the  silver fleet, Brazil pocketed the first win, with Mexico’s Jeronimo Cervantes Belausteguigotia/Ander Belausteguigoitia leading race 7 from start to finish to seize victory. The Brazilians followed up with a seventh to lead the 29-boat silver fleet after 7 races.

470 WOMEN
A challenge to get the two 470 women races underway, with general recalls, postponements and eventually getting off under the black flag.

It seemed as though the day would belong to Hannah Mills/Saskia Clark (GBR) who won race 5 and took over the series lead. But it didn’t take long for reigning 470 World Champions, Lara Vadlau/Jola Ogar (AUT), with their single digit scorecard, to pop out on top by race 6. Just 1 point now separates the two teams.

“Any World Championships you go to with the goal of trying to win it,” said Mills. “Apart from the Olympics, there is nothing else quite like winning a Worlds. Absolutely, we are here to try and win, but there is massively tough competition. There are five or six boats really battling it out, so we are going to have to be on our top form to be in with a chance.”

“It was a massive deal,” commented Clark, on their selection for Rio in early September. “Apart from the Games themselves, it is the second most important thing of the cycle, to get selected. So whatever position you are in during the trials process with your British competitors, it is always a distraction. To have that done means we can really focus on the areas we want to improve and then when we are at regattas like this, to be racing properly against the best.”

“Sometimes I look back and it feels like yesterday, and other times it feels like a long time ago,” said Clark referring to their silver medal at London 2012. “Hannah and I certainly had our ups and downs getting to this point after such a high that was the London Olympics. It has been interesting that drop off after the Games and then rebuilding and how long it takes. There are really important milestones in that and definitely we feel we are on good grounding now for a real charge in the next ten months.”

“We know what our potential is here and we are looking to perform,” said Provancha.”However, anything can happen in our sport and there are a lot of teams who could easily win this event so we will take it a day at a time and enjoy the competition at this great venue.”

The next four races will decide the nations claiming one of the three qualification places for Rio 2016. Just last year, Finland’s Niki Blassar was hoping she would make it to Rio in the Laser Radial. But up against more experienced Finnish contenders, she instead accepted the invite from Mikaela Wulff to partner up in the 470 in November 2014. The 470 Worlds marks their tenth event together and so far so good.

“We haven’t sailed such a long time together, so if we get the spot that would be great," explained Wulff. "If we had been sailing longer together, it would have felt like we had to get it. But because we are new, to get it would be a big, big plus.”

If they qualify, it will mark the first time since the 1992 Olympics that Finland has competed in the 470 Women event.

Amongst the finest young talent competing is the Spanish partnership of Silvia Mas/Paula Barcelo. Only last year Mas won the ISAF Youth Worlds in the 420 Class. Since then she has teamed up with Barcelo and the pair have taken the 470 Junior World by storm, finishing 6th at this year’s 470 Junior Worlds and 2nd at the 470 Junior Europeans. Making her debut performance at a 470 Worlds, Mas finds herself racing against many contenders from her youth sailing days. Today though, she is most proud of their 9th place finish in race 5.

“We are happy because it has been a difficult Championship for us, with such great people racing here, and we were happy to get a result in the top 10. It is completely different to racing at junior championships, because there we are not all sailing full-time professionally. If you make a mistake here, to recover is impossible.”

Competing at a Worlds so early in her 470 career does not faze Mas, who said, “For me I like this kind of challenge because you see all the people that are better than you and beating you always. It is a motivation to try and do your best and get better and better. You have to do a lot of events to get there.”

The learning curve is steep, as they prepare for five years from now at Tokyo 2020.

The 470 Women will contest 2 races tomorrow, with a scheduled start time of 1300 hours. 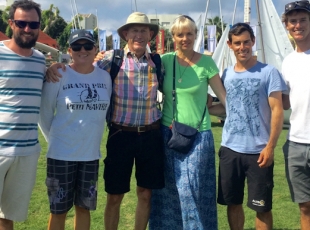