All change on race day 4 at the 470 Europeans in Monaco as big breeze and waves hit the race track and upped the pace, in complete contrast to conditions over the first three days.

This is what it is about and the contrasts of sailing are just part of what makes the sport special. 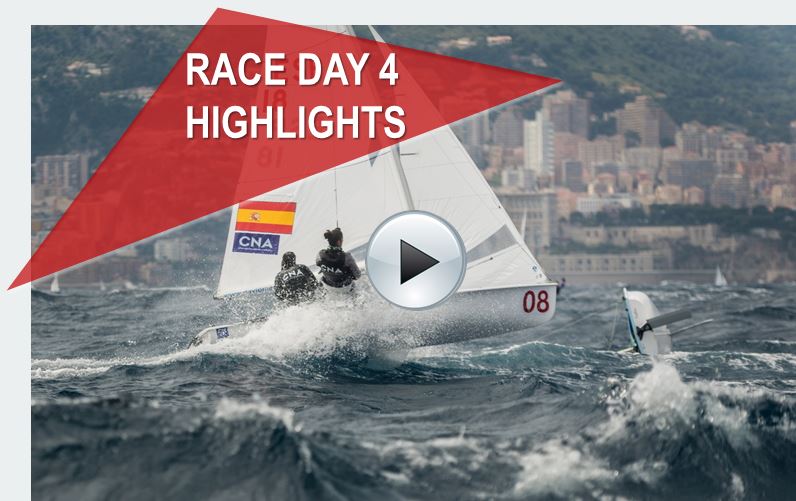 The more experienced teams came to the fore, with the biggest gains on the race track going to the world #1 pair of Afrodite Zegers/Anneloes Van Veen (NED) who clambered from leaderboard 16th up to 1st.  Sweden’s world #1 pairing of Carl-Fredrik Fock/Marcus Dackhammar continue to dominate in the men, but the points margins are closing in.

Racing was postponed this morning as waves of up to 4 metres and average wind speed of 25 knots, with gusts up to 32 knots, were too volatile a combination. So, the Race Committee waited a couple of hours until the wind had dropped to 22-23, with gusts of 25 knots, to get racing underway.

Big breeze and sea has meant some shredding of equipment, with damage to boats and a few bent masts, as the gusts powered through.

470 WOMEN
After opening their series on the backburner, Afrodite Zegers/Anneloes van Veen racked up a 2nd place in the first race of the day. The Dutch led for most of the race, before the Spanish overtook them on the final downwind leg, and with it the world ranked #1 pair moved up to 5th overall just 6 points off Poland's Agnieszka Skrzypulec/Jolanta Ogar who took the overall series lead. A similar pace in the next race rewarded the Dutch with the race win, and pushed them up to first overall on tiebreak with Poland.

Competing on a European Championship stage is not easy, and recovering from a slow start is even harder, as van Veen explained, “On the first days we made some mistakes. We had a little bit of material damage on the first day and then we said ‘ok’ just try to do what we know well, and that is what we did today. Also from the Rio Olympics, when there were similar conditions, we used that experience today and didn’t make any big mistakes.

Zegers felt their cautious approach in the first race of today cost them the win, saying, “They the Spanish had a better hoist in the downwind and they were fast in the upwind, and we were just a bit too conservative. But taking the experience of the Rio Olympics where we were leading a race and we capsized, we chose to be conservative. But in the second race we sailed a bit more freely and we did ok.”

When asked about their massive leaderboard game today, Zegers would not be drawn, instead saying, “I was not looking at the results at all, I didn’t want to look. Also the coach told me not to, as this is not really the goal. If your performance has been so bad, you try to see OK how to make it better, because this Championship is not the end game. We still have to improve for the Worlds and the Olympics in 2020, so we were just busy with our performance and we made some mistakes in the very light, tricky conditions. We have taken a big lesson from this and we still have three races to go and the medal race.”

“Experience was counting today and a little bit of weight too, and I saw the results and I am happy as now we are in the front finally!  It was similar conditions to Rio, that big day during the Olympics, with big waves and quite strong winds. Although the wind was not so strong here, the waves were massive and every manoeuvre was risky, but I think we know how to sail and we controlled the boat and we tried to enjoy, even when it was on the edge. Today we were really sailing and these conditions separated the women from the girls.”

In third place are the vastly experienced team of Amy Seabright/Anna Carpenter (GBR). The women’s scoreboard has compressed significantly, with just 18 points difference between the top ten teams.

Superb boat control from Australia's young pairing of Nia Jerwood/Monique Devries gave them a 3rd place finish today, as they improve their scorecard race by race.

Friday the weather conditions are again light, but there is the added tension of qualifying to the medal race. So will experience pay again, as the older teams focus through the pressure, or will it all be about faster boat speed for the lighter weight teams?

470 MEN
On a day when experience came to the fore, it was no surprise to see Olympians taking control of the track. Relishing the breeze, Olympic bronze medallists Panagiotis Mantis/Pavlos Kagialis (GRE) staked out the first win of the day, repeating in the second and consolidated their position on the leader board.

“Today was a strong day, with strong winds,” said Mantis.”It was very difficult, anything could happen, have damage or capsize. We had good speed, so we managed to have two bullets.

Mat Belcher/Will Ryan were leading the second race of the day, but just after the downwind gate their jib wire broke, forcing them to retire from the race, and consequently drop down the leaderboard.

Carl-Fredrik Fock/Marcus Dackhammar maintain their consistency, racking up a 9,14 to hold them firm at the top. But, the points’ gap is closing in. France’s Guillaume Pirouelle/Jeremie Mion move up to second from their 3,2 scorecard, and Turkey’s Deniz Cinar/Ates Cinar claim third overall.

The Turkish team’s position demonstrates a significant escalation of performance for the Cinar brothers, who have been training hard and admit they have never before placed ahead of Belcher/ Ryan.

“Today was a bit strong. The first upwind we had a good position, but in downwind we lost some points and reaching. In the end though, 8 and 7 is good for today,” said Deniz.

The brothers’ campaign for Rio 2016 did not go to plan when Deniz suffered a shoulder injury, which kept him out of sailing for two years and meant they only returned to the campaign trail 18 months prior to the Olympics. This time around, as they attempt their fourth consecutive Olympic appearance in Tokyo 2020, the game plan is a bit different.

“We have had a break since Rio and returned to the boat in February,” explained Deniz, and at the same time started working with a new coach. “It’s a new team and a new coach and yes we have sailed together for many years, but things change and we are getting more serious, and we want to do things properly now with four years preparation for Tokyo. Our main target this year is the Worlds,” he concluded in anticipation of the pinnacle event of the season, taking place in Thessaloniki, Greece, 7-15 July 2017.

Three races are scheduled on Friday for the men, with the top ten racing in the Medal Race podium decider on Saturday.

All change again on Friday with the forecast indicating a drop in breeze down to 8-10 knots. Three races are scheduled for all fleets to determine the top 10 teams who will advance to Saturday's medal race. 470 Women race first at 1200 hours, followed by Men Gold and Men Silver.