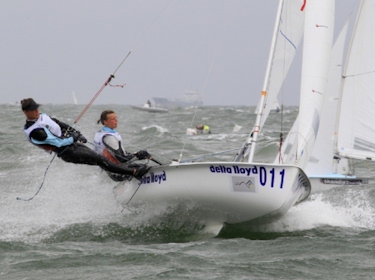 Weather off the Hague, or perhaps the inaccuracy of the forecasts, continues to wreak havoc with the Delta Lloyd 470 World Championship. Today the boats were sent out in the morning only for conditions to prove far too brisk for the majority of the fleet, which were duly sent home. With wind against tide further increasing the severity of the waves in the afternoon, it wasn’t until the early evening that the final races of the qualification series could be held and even then this was only possible in the two Women’s groups.

With theoretically two qualification races left to sail in the Women’s class, they managed only one and the winners were Italy’s Guilia Conti and Giovanni Micol and long term Argentinian 470 campaigner, Maria Fernanda Sesto and Consuelo Monsegur. These results now mean that the Italian duo are tied in first place on eight points with New Zealand’s Jo Aleh and Olivia Powrie, three points ahead of early leaders at this regatta, Americans Eric Maxwell and Isabelle Kinsolving Farrar.
“It was very hard to keep your concentration throughout the whole day,” admitted Guilia Conti.

Their race started in 12-13 knots and dropped off gradually over its duration. “We raced well and made good tactical decisions and we passed the last boat [the Netherland’s Margriet Fokkema and Marieke Jongens] on the last reach, because it was a tight reach - the first boat put up their spinnaker but couldn’t reach the mark.”

Of the regatta so far generally Conti said: “First day light wind, second day medium wind and today hurricane! We’ve had everything!” This morning there were gusts of over 25 knots, but the problem was the waves. One of these caused Conti and Micol to capsize, not sideways, but to reverse pitchpole - the bow flipping back over the stern. “I’ve never done that before - Giovanna, my crew fell over me. A lot of boats capsized, some of them broke their masts also. It was pretty tough, but our boat was perfect.”

A race was attempted on the Men’s course, but this didn’t get underway until slightly later than the Women and by this stage the wind had dropped off to such a degree that with the counter tide the first boats failed to reach the windward mark within the 25 minute maximum time limit.

“We went out and were thinking it was going to still be quite windy this afternoon and we were a bit surprised it died off so quickly,” admitted Australian Matt Belcher, who continues to lead the 470 Men with his Beijing gold medallist crew, Malcolm Page. “The current became more and more of a factor, which is why they had to cancel at the end of the day. No one could cross the line on starboard because the current was so strong.”

The word ‘forecast’ is not one to mention to Event Director Edwin Lodder at present. “In the morning there was over 30 knots of wind, so we decided to get everyone back and to wait,” he explains his predicament. “The forecast had been about 20-25 knots and the wind direction was different to what was expected. So we waited and every hour we had contact with the meteo and at 6pm the wind was really lower than before and their forecast for after 8pm was for a good wind of about Force Four (11-15 knots). The weather conditions between 1900 and 2000 (local) were excellent, but after that it just dropped off and that wasn’t expected.”

Matt Belcher agreed with the inaccuracy of the forecasts. “We have a few forecasts and I don’t think any of them are right yet. It is a tough place, but it is the same for everyone. You try and keep your head out of the boat and try and make the right decisions at the right time.”

Despite not completing all the scheduled qualification series, tonight the classes have been divided up into Gold, Silver and Bronze fleets for the Men, and Gold and Silver for the Women. Three races are scheduled for tomorrow, the first start at 1100.