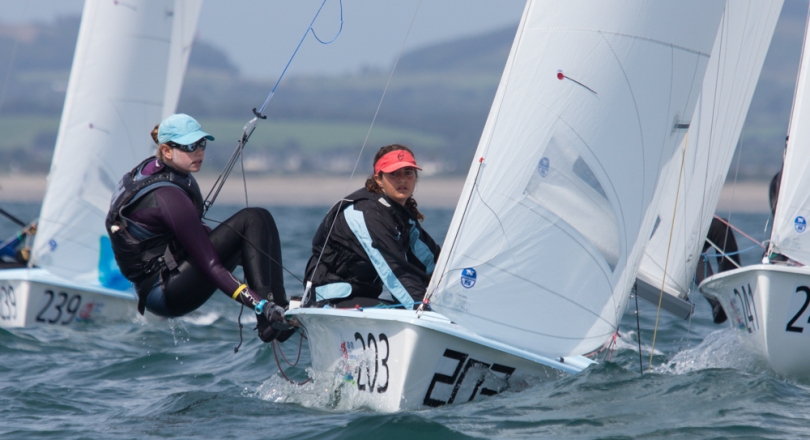 A tricky day of racing out on the two races courses today for the 2013 420 and 470 Junior European Championships, with those who kept their heads out of the boat to play the shifts and spot the puffs on the track taking the leaderboard advantage.

In the 420 Junior fleet, which sees all teams girls, boys and mixed competing against each other, three girls teams still continue to dominate the leaderboard top three, albeit in a different order. Two race wins were more than enough for Ilaria Paternoster/Bendetta de Salle to take over the yellow jerseys, and become the first placed of the six girls’ teams in the top 10. The top boys’ team are now Bart Lambriex/Philip Meijer (NED) who managed to slip into fourth overall, just 1 point adrift of 3rd.

In the 470 Women, Anna Kyselova/Anastasiya Krasko (UKR) continue to dominate, claiming their fifth race win in race, whilst in the men’s after a brief leaderboard swap after race 7 the Italians Matteo Capurro/Matteo Puppo returned to pole position by the end of racing.

The end of the Championship draws near, as we head into the medal crowning final two days at the 420 and 470 Junior European Championships in Pwllheli, Great Britain.

470 Junior Europeans
No change in the teams in the top 5 on the 470 Men leaderboard, just a change in the order, with Sacha Pelisson/Mathieu Bouchet (FRA) jumping up to third overall, and Mike Wood/Hugh Brayshaw (GBR) and Julian Autenrieth/Adrian Hoesch (GER) pushed back to fourth and fifth. 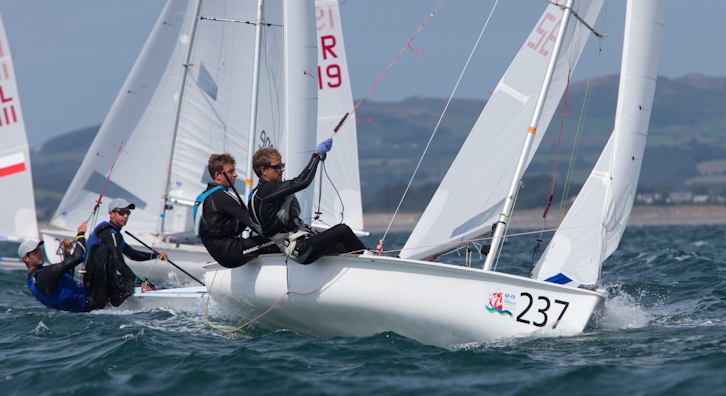 A cat and mouse game for the two teams at the front of the leaderboard, Mattteo Capurro/Matteo Puppo (ITA) and Gal Cohen/Dan Froyliche (ISR), as they exchange leaderboard positions. Advantage to the Israelis, who are the 470 Junior World bronze medallists. after their win in race 7 put them at the top, but the Italians fought back to finish ahead in race 8 and regain the leaderboard with a 1 point advantage.

Cohen commented, “It is close. The Italian team are very stable like us, so it is hard to catch them, but we are in the right direction.”

These two top teams have now established a helpful ten point advantage over the others, which will slightly change the pressure for tomorrow. “It is very good,” said Froyliche, “We are comfortable and won’t look at the other boats and will just look forwards and hope to be the first.”

Froyliche is a past 420 Junior European Champion, so the 470 Junior European Championship title is on his medal haul check list. “It is just good to be back and with a shot at the podium,” he said. “ It is hard work in the 470 compared to the 420, as you need to deliver everything and to a higher level. Today going upwind there were five boats and you didn’t know who was first. It was so close, it was crazy.”

As a parting shot to the other teams, Cohen said, “I am enjoying it. I like the pressure and take it in a positive way. I know that everyone in the top five is very good and we just need to beat them!” 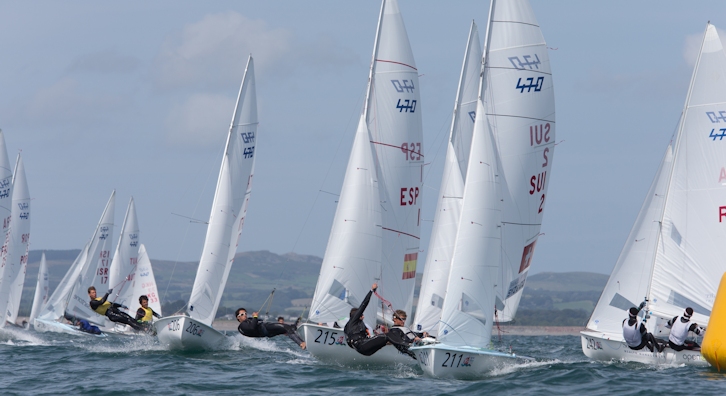 The final two races ahead of the medal race take place tomorrow, getting underway at 1300 hours.

The Ukraine’s Anna Kyselova/Anastasiya Krasko stay put at the top of the 470 Women leaderboard, and Spain’s Barbara Cornudella/Revetllat/Sara Lopez Ravetllat move on up to second.

Kyselova/Krasko produced yet another masterful race today, to claim their fifth win in a row, and rounded out their day with a 4th place in race 8. Even if theoretically they finished last in both of tomorrow’s races, they would still advance to the medal race at worst in equal third. So now the focus is to assure themselves of gold on Thursday, and add to their 470 Junior Worlds silver medal. 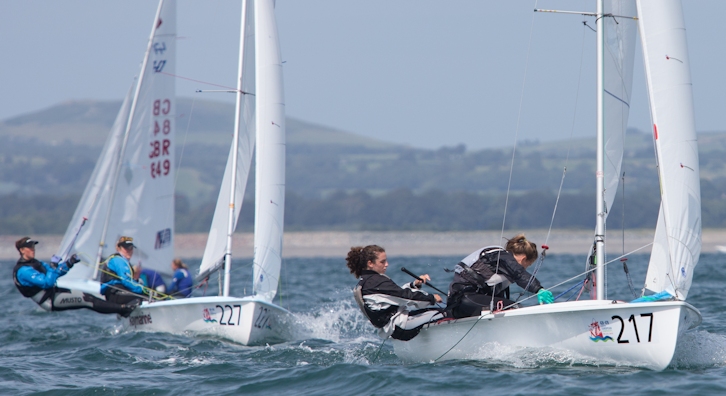 So far a competition career best for the Spanish, as Cornudella said, “Yes – we want to get on the podium, but we will do what we can. We have never been at the front of the pack.”

The second race win of the day went to Israel’s Noya Bar-Am/Danielle Maman who consolidated their position ahead of the final two races to determine the 8-team medal race line-up. 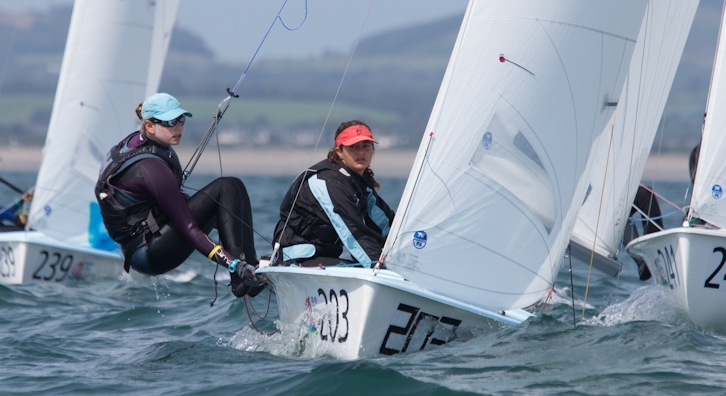 The 470 women will take to the race track for races 9 and 10 after the 470 Men tomorrow, with the top 8 teams advancing to Thursday’s Medal Race.

The forecast for Wednesday is a southerly breeze of around 15 knots with gusts up to 24 knots when racing is scheduled to get underway, decreasing in the mid-afternoon. In anticipation of a light wind forecast on Thursday, the Race Committee has revised the racing schedule to allow for up to 3 races in the 420 fleet tomorrow.

The girls’ teams continue to punch through on the race course and not only hold the top three leaderboard places, but claim six of the top ten slots.

The first day of the final series, and a key day to establish a race track pecking order as the best teams from the qualification series came face to face for the first time. A mixed bag of results from the first 4 races in the qualifiers saw the ISAF Youth Worlds bronze medallists Paternoster/di Salle just scraping into the top 10. But their usual magic kicked back in and since then they have led the way round the track to seal four race wins in a row and climb to the front of the standings.

France’s Marie Soler/Laura Pebrier move up to 2nd overall after a 3,4 scoreline, with Romaniuk/Goralska now in third. A surprising 42nd place finish by the Polish pair in the day’s opening race 7, caused by a combination of a poor start and wrong side of the track decision, knocked them down to third, and they followed up with a 16th place which now positions them 24 points off the top of the leaderboard.

Soler/Pebrier’s consistent form is impressive for what is a relatively young partnership of just on year. Commenting on the racing today, Pebrier said, “It was not so shifty today, but the pressure around the track was really different. We tried to follow the wind and it worked. I think we don’t realise how well we are doing. We will just keep concentrating and see at the end of the regatta what the final result will be.”

The pair represented France at the SailFirst ISAF Youth Worlds finishing 8th and then raced at the 420 Worlds in Valencia finishing 18th – so a non-stop summer of racing. “We try to not to say to ourselves, Ok it is finished we are second, but just to keep concentrating and go. This year the level of the girls’ sailing is really, really good,” Pebrier concluded. 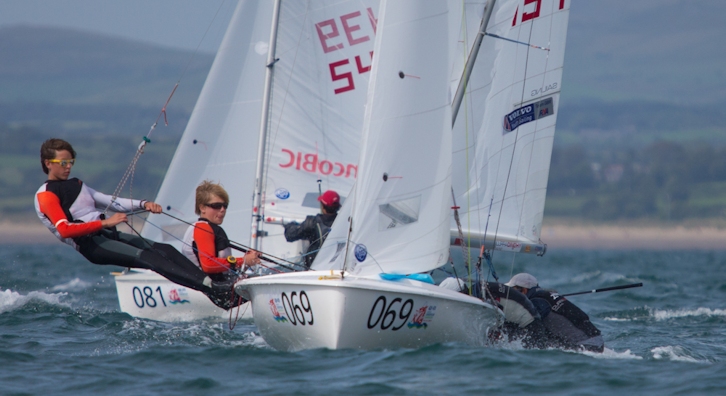 Taking over the baton as the top placed boys’ team are Bart Lambriex/Philip Meijer from the Netherlands who move up to 4th overall from their 6,2 scoreline.

The biggest position upgrade today though goes to Great Britain’s Daniel Whiteley/James Cleetson who have leapfrogged the rest of the British teams, going from an opening position of 11th on the leaderboard to end the day in 6th after their 4,7 finishes. 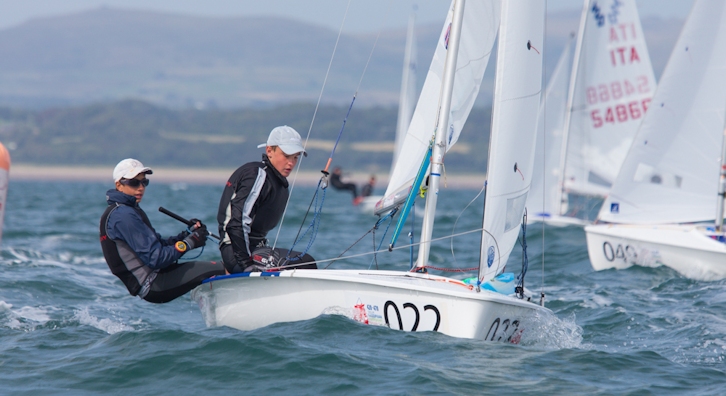