Patience and Bithell’s (GBR) dreams of dominating the gold fleet were sunk from the start of today's race 6 after a capsize off the start and penalty turns saw them cross the finish line in 28th. 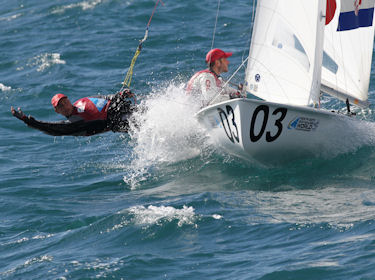 A third place for defending World Champions and world #1 ranked team Mat Belcher/Malcolm Page (AUS) shifts them up to the front of the leaderboard, but the stars of today were Croatia’s Sime Fantela/Igor Marenic who led the race from start to finish.

With the split to gold and silver fleets decided after yesterday’s race 5, today’s reserve day was brought into play to catch up on the series for a single race 6 for the two fleets, after Tuesday's lost race day due to the electrical storm.

An increased anticipation in the boat park this morning as the gold fleet got ready to face off for the first time, changed to a need for patience on the race course after a prolonged delay in starting race 6. A general recall was followed by another two abandoned start attempts just before the gun due to wind shifts. A clean start on the fourth attempt saw the majority of the fleet favour the left hand side of the course, although Japan’s Tetsuya Matsunaga/Kimihiko Imamura led a charge of about four boats who took a track to the right. Their move initially looked as though it may pay off, but ultimately the Japanese slowly dropped back down the fleet to finish seventeenth.

All eyes were watching and waiting for the showdown between the series leaders Luke Patience/Stuart Bithell (GBR) and defending World Champions Mat Belcher/Malcolm Page (AUS), who were each on a roll of four consecutive race wins apiece, but it never happened.

A change of fortunes for series leaders Luke Patience/Stuart Bithell (GBR) saw their run of race wins come to a dramatic end after a capsize soon off the start and penalty turns for a foul at the windward mark saw them end the day at the back of the fleet. “We had a bad start and we capsized,” said Bithell. “We were dead last at the first mark and from there we had to catch up. In the 470 you can’t make any mistakes because it’s so competitive.”

The British pair clawed their way back up the fleet to 25th for their second rounding of the windward mark and things continued to look up as they improved to 21st as they approached the last upwind leg. But a foul to another boat whilst rounding the mark forced them to take penalty turns and much of the ground they had made was lost as they went on to cross the line in 28th and with it handed the series lead to the Australians.

A steady approach to their World Championship campaign today saw Sime Fantela/Igor Marenic pull the proverbial “rabbit out of the hat” today to sail a stunning race and lead from start to finish to take the gun with a 24 second margin over Israel’s Gideon Kilger/Eran Sela. The race win doesn’t change their overall position of the leaderboard, where they remain in third overall, but critically it closes the points margin to the leaders. Reigning 470 European Champions Fantela/Marenic deservedly came ashore full of confidence, and will be draw on their vast 470 experience, which includes the gold at the 2009 470 Worlds and bronze at the 2010 Worlds as they plan their attack to commander the top spot on the leaderboard. Kliger/Sela bump themselves up from 12 to fifth on the standings.

Contemplating their race, Marenic said, “It was really tough and luckily we had an excellent start on the pin, then we chose the left side which was the better side for the first upwind. It was really, really close on the first upwind mark. The Australians tacked beneath us and we managed to pass them and Israel went above us, so we managed to round first. Then we made some gains in the first reach and downwind and after that it was more about controlling the race. We then tried to avoid big mistakes and watch the wind.” Clearly delighted to be the team to break the winning Australian and British streak, Marenic couldn’t hold back a smile saying, “It’s a great feeling. It was pretty one sided until now and this is finals and mistakes are easier to make in the finals. We go race by race and luckily we sailed this one perfectly.”

Satisfied with their third place finish, Mat Belcher commented, “We are really happy with our result. Obviously today is the first day of finals and I think it is inevitable that with this fleet and the calibre of sailors you cannot keep on posting bullets. We knew it was going to be difficult and to come away with a three is fantastic.” The Aussies almost took the lead from the Croatians at the first windward mark, but it would have been a risky cross and instead they chose to duck the Croatians, a decision they don’t regret as Belcher explained, “With the competitors we are against it is not worth taking the risk. We knew we could put ourselves in a better position but that wasn’t really the defining moment of the race, but it could have been if we had had to do penalty turns. To be a bit safer, we would take that choice any day.”

On their approach for Friday’s two races where the 470 fleet will race on Centre Course for the first time, Belcher said, “The great thing about this racing and 470 racing is you get it wrong and you will get punished. We will try and keep focusing on ourselves, keep trying to start well, keep trying to perform as we have and hopefully carry it through.”

There are still another four races to complete the final series for both the gold and silver fleets, with two races scheduled for Friday and Saturday. However, the top three boats have built up a significant points margin over the rest of the fleet already and to break into this trio is going to take a big shift in gear from the other competitors or some mistakes from the top. The final Medal Race will take place on Sunday.

Twenty four nations in the gold fleet are now challenging to secure the 19 Olympic qualification places available at the Perth 2011 ISAF Sailing World Championships. Whilst the teams at the front of the fleet will inevitably be successful in qualifying their nations, with more nations in the gold fleet than Olympic qualification places available, tomorrow’s two races will start to give a clearer picture of those nations who are likely to make the grade.

All change at the front of the silver fleet, where the teams in positions 40 through to 80 are racing. Silver fleet race 6 was won by Vladimir Chaus/Denis Gribanov (RUS), with Vianney Guilbaud/Mathieu Fountaine (FRA) second and Deniz Cinar/Ates Cinar (TUR) in third.

Both the gold and silver fleets will be racing on Centre Course tomorrow, with the gold fleet up first for two races starting at 1200 hours, followed by the silver fleet. Follow our live twitter blog from the race course on www.twitter.com/470sailing