Calm Before The Storm at Day 1 of Worlds 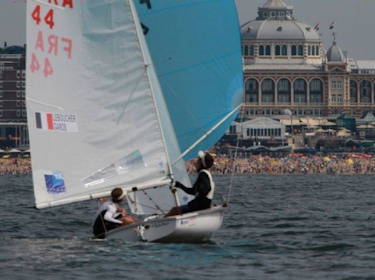 Conditions transpired against the possibility of racing on the opening day of the Delta Lloyd 470 World Championships, taking place off the Hague, Holland. The final tally of entries taking part in this resort town, best known for being the home of the International Court of Justice, comes to 119 men and 62 women. Chilean sailors, Aurelia Zulueta and Josefina Eluchans have had to stand down, but there has been an 11th hour entry in the 470 Men’s class from India in Pushparajan Muttu and Nijeesh Bhaskaran so there are still 39 nations competing.

After a delay ashore until 1400 hours (local), the Men’s and Women’s fleets ventured out into a near mill pond, as they did their best to not be throw around too much by the tide. But with storm clouds looming and no start looking possible, the fleets were sent back ashore – just in time. The lack of wind this afternoon proved to be the calm before the storm for at around 1700 hours suddenly the heavens opened and there was driving rain and 40 knot gusts. Just over half the fleet had made it safely to land when this struck, but some weren’t so lucky. This included the Swedes Anton Dahlberg and Sebastian Östling, who last Wednesday moved into the no.1 position in the new ISAF rankings.

Dahlberg explained what happened: “When the wind came we were being towed and we were doing a change in the towing. The wind caught us by surprise and we ripped our sails. So we are looking for new sails at the moment. It wasn’t the best way to come into the Worlds...”

After a consistent season so far that has seen them finish on the podium at three regattas leading up to the Worlds, so Dahlberg, who typically sails from Stockholm or Gothenberg, says they were hoping for similar success this week.

“It is really big for us - it is like a goal you had in your life and suddenly it is there,” he adds of their ranking. “It has been a really good season. Our consistency has been the best. We have been focussed.”

For others the sudden violent downpour came as more of a surprise. Pakistan’s entry in the 470 Men, Xerxes Avari and Mehboob Rafiq, have been sailing in the class for eight years and this is their third World Championship. “We do get rain in Pakistan, but let’s hope we get a better day tomorrow,” said Avari.

Avari and Rafiq usually sail out of Karachi where they are currently trying to coax more of their compatriots into racing them the Olympic doublehander. “At the moment there are only two 470s and the other guy doesn’t come out very much!” states Avari. “So we mostly sail on our own, but we are trying to get a few more people involved.”

In terms of local competition they have competed in Pakistan for the right to go to the Asian Games, where they finished “way, way down” according to Avari, who adds they are keeping their fingers crossed for a mid-fleet result this week off the Hague. “It is good fun, but it is very competitive.”

So will there be racing tomorrow? According to Delta Lloyd 470 World Championship Event Director Edwin Lodder the forecast for tomorrow should be better than today. However they do have some flexibility. There is no time limit on when they can start racing, and Lodder says that if conditions prove awkward again this week they have the option of keeping the boats out into the evening. “We want people back before 2100 hours. We don’t want to finish them in the dark or having them back in the harbour after dark.”

The forecast has the wind veering through 180 degrees tonight into the northeast. During the day it is suppost to build steadily from 5-10 knots at lunchtime to 10-15 later in the afternoon.