Racing at the 470 Junior World Championships kicks off on Friday 22 July, with 94 teams from 26 nations ready to contest the regatta in Medemblik, The Netherlands. 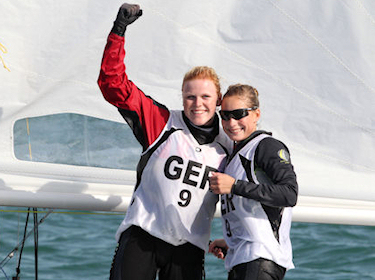 Although the competition is limited to sailors aged 21 and under, the standard at the front end of the fleet is not far off the level found in senior competitions in the 470. The 470 European Championships have only just concluded in Helsinki, and many teams have made the drive across northern Europe to reach Medemblik.

German team Victoria Jurczok and Josephine Bach are looking to defend their junior women’s title from the previous Junior 470 Worlds in Qatar at the end of last year. They are also looking to make amends for a disappointing performance in Helsinki.

“Helsinki went really badly for us,” said Jurczok. “We hope we can escape from our "bad-sailing-trip" in Medemblik and get a top 3 position. But we have to be careful this year, because I think there are a lot of good and talented new teams. We will try our best - as always - and hope to sail well in our last year in the juniors. That would be great, and a good way to move from the juniors to seniors.” Some of the defending champions’ toughest competition is likely to come from their German compatriots who have dominated the girls’ junior regattas in recent years.

Meanwhile in the men, reigning Junior World and European Champions from France, Sofian Bouvet and Jérémie Mion, are now too old to defend their titles and have moved fully into senior 470 competition and with different team mates. Highest remaining competitor from the 2010 Worlds is the Italian team of Simon Sivitz Kosuta and Jas Farneti. Having won bronze last year, maybe this time gold is up for grabs, although Kosuta is not making any bets.

“Last year’s gold and silver medallists have moved into the senior fleet, but a lot of good participants weren't at the World Championship in Qatar,” said Kosuta. “I’m thinking of sailors like Kevin Peponnet from France, Phil Sparks from Great Britain, the New Zealand team, Canadians, Israel, the list goes on. So I think that this Championship will be as difficult as the last one in Doha. Maybe the wind will be heavier then the last one. But we have trained a lot, and I think that we are ready for the competition. Next week we will find out if that’s true!”

All corners of the world will be well represented in Holland. Furthest travelled will be the Kiwi team of James Turner and Matthew Jones, whose famous parents will be standing shore side in Medemblik. Jones’s mother Jan Shearer won a silver medal at the 1992 Olympics while his father, Murray Jones, is a former 470 champion and four-time winner of the America’s Cup.

Shearer was delighted to see Matthew following in her footsteps. “I have thoroughly enjoyed every aspect of my Olympic sailing. It's a bonus to have won a medal, but it is the lifestyle and opportunities that sailing presents which are unique.” A number of sailors at this event are aiming to keep the family name flying high. Kevin Peponnet’s uncle, Thierry Peponnet, won 470 gold in the 1988 Games, and Eilidh McIntyre’s father Mike McIntyre won Star gold that same year in Korea.

There are many sibling teams racing in Medemblik, with 11 sets of brothers in the men’s division, although the Austrian Bildstein brothers are competing against each other in separate boats. In the girls’ division, the same is true of the Keijzer sisters from the Netherlands. Nina Keijzer is a serious medal prospect in Medemblik with her crew Anneloes van Veen, although she’ll be keeping an eye out for younger sister Lana. “She's been sailing the 470 for almost a year now, and before that she did 420s like I did and she also sailed Splash and Optimist. 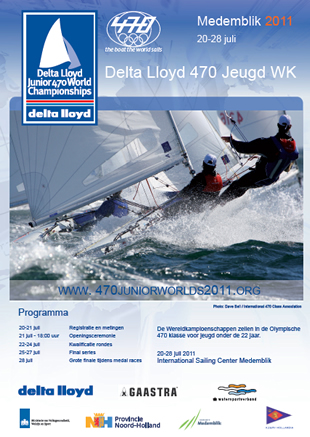 “It's really nice to be able to help my younger sister with sailing stuff so she can benefit from my experience. For example I have been helping her a lot with trimming her boat and adjusting systems to her preferences. The last couple of months we have been training together with the rest of the Dutch Junior Team. I found her quite competitive in tactics and her boat speed is also surprisingly high, especially in the lighter range of wind conditions. Together with her helm Sanne Crum she has a very intelligent team, especially competitive in difficult conditions such as in Medemblik.”

Nina says she doesn’t consider her sister as any more a rival than any other competitor. “Although it can be quite frustrating to lose to my younger sister, we set our goals in terms of specific learning experiences and we focus on a good result in the overall standings of the championships, not on beating individual teams. It is to both our advantage that we are able to train together and help each other during the regattas.”

With home water advantage, the Keijzers and other Dutch teams will be looking for a good result in Medemblik, but the form book in both men's/mixed and women's divisions looks very open.

Racing gets underway on Friday 22 July, with a Qualifying Series, followed by Final Series starting on 25 July. The final day of racing is Thursday 28 July 2011.