British teams are at the top of the Men’s and Women’s divisions after a wet and windy first day’s racing in Holland at the Delta Lloyd Junior 470 World Championships. 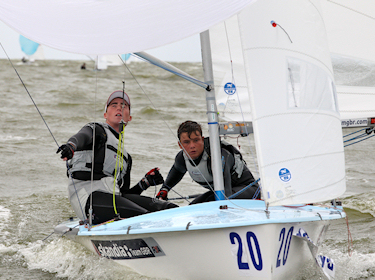 Racing in the short, sharp chop of the Ijselmeer out of the International Sailing Centre Medemblik, Anna Burnet and Flora Stewart took a firm grasp of the Force 4 conditions to sail out to an enormous lead in their first heat of the 32-strong women’s fleet. With the Men's/Mixed fleet of 60 boats divided up into two qualifying groups, Phil Sparks and David Kohler were making hard work of the first beats but screaming downwind and took a 2,1 from their two heats.

Burnet and Stewart’s big lead in their first race somewhat fell into their laps, after being forced to tack away soon after the start and ducking most of the fleet to break out into clear air on the right-hand side of the course. “We found a windshift out there,” said Stewart, “maybe 15 degrees or so, and suddenly we were in the lead.” By the first mark they were almost 2 minutes ahead of the next boat. Local sailors Nina Keijzer and Anneloes van Veen train in Medemblik more than anywhere, and their familiarity with the conditions started to show as they moved past some of the highly-fancied German crews to come second behind the British.

The Dutch then picked up a 3rd in the next race with the British in 4th, and now these two crews share the top of the leaderboard with 5 points, although the first race victory nominally puts Burnet and Stewart in first place. The reigning women’s 470 Junior World Champions, Victoria Jurczok and Josephine Bach, struggled in the strong conditions today, a stark contrast to the lighter breezes that suited the German crew in Qatar last year. “We are not so fast in the strong wind,” said Jurczok, “but for us we were quite pleased with our day. We have had some bad regattas in the past few months. We broke our mast here in Medemblik at the Delta Lloyd Regatta back in May, and then broke another mast at Skandia Sail for Gold. This week we want to get out of this bad phase and start sailing well again.” 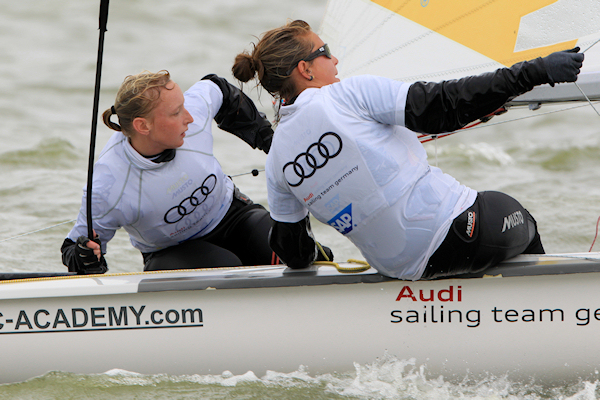 Another highly rated German team, Tina Lutz and Susann Beucke, had an up and down day. They won the 470 Junior European Championships on these same waters four years ago, but a momentary lapse of concentration before the start saw them capsize. Still, they made a good start to the first race, although a bit too good as they discovered when they crossed the finish line in 6th place only to find out they had been scored OCS for being over the start early. A disappointing start for one of the series favourites, but they bounced back strongly by winning the second race. Lutz and Beucke will be looking to discard that OCS later in the series.

In the Men/Mixed fleet, David Kohler was kicking himself for allowing him and his helmsman Phil Sparks to get caught under the dirty air of a 30-foot cruiser. “Our first beats weren’t too great today,” admitted Kohler, “but we were going fast downwind and managed to catch up there.” At times Kohler was getting on the trapeze down the runs, Sparks sailing bigger angles than most of his rivals to surf up and over each wave top and forward to the next. “One gybe was a lot harder in the waves than the other, so we overstood the layline a bit so we could come back into the mark with speed, and it seemed to work,” said Sparks.

Where the British were making their gains downwind, the Swedish team of Nicklas Dackhammar and Fredrik Bergstrom were the speedmasters upwind. “We led at both first marks,” said Bergstrom, “and did enough to stay up the front.” They swapped places with the British in each of their races, so with both teams counting a 1,2 score they share the lead with 3 points. Sparks’s win in race 2 puts him ahead on countback.

In the other Men’s qualifying group, Kevin Peponnet and Julien Lebrun picked up scores of 1,3 which puts them in 3rd overall. Peponnet comes from a French family with a strong 470 pedigree. His uncle, Thierry Peponnet, won Olympic gold in a windy Korea in 1988. Today the younger Peponnet looked very comfortable in the strong breeze. “Last year we finished on equal points with bronze, but were 4th overall,” said Peponnet, “so this year it would be nice if we can get on the podium.”

With stronger winds forecast for the weekend, Kevin Peponnet might be advised to ring up his Olympic Champion uncle and ask for some extreme sailing tips. Today was not exactly a walk in the park, but the great thing about the 470 is that you can keep on racing it hard in even the toughest of sailing conditions.