Friday’s racing in the 470 Women’s fleet on Centre Course belonged to Brazil, as Martine Grael/Isabel Swan sailed a stunning two races to claim a race win and a 2nd and propel themselves up into the top 10 on the leaderboard after races 7 and 8. 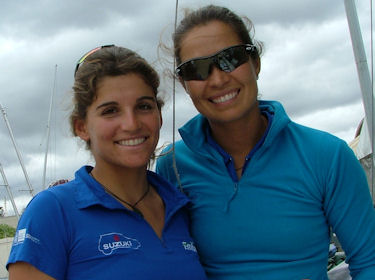 Racing was held on a windward/leeward course format with the finish coming right in close to the beach in Bather’s Bay under a blue sky and breeze of around 18 knots over the two races.

Behind the Brazilians in race 7 were Yuka Yoshisako/Nariko Okuma (JPN) and Jo Aleh/Olivia Powrie (NZL). Apart from the Brazilians, new faces at the front in race 8 which was won by Italy’s Giulia Conti/Giovanna Micol, with Grael/Swan in second and a return to form for 2011 470 European Champions Henriette Koch/Lene Sommer (DEN) who finished third.

Not the best racing day for overall series leaders and world ranked #12 ranked team Tara Pacheco/Berta Betanzos, who posted a 27 and 7, although the team still hold their grip at the front of the leaderboard. With inconsistent results from the other top teams, the Spanish have actually increased their points margin over Ai Kondo/Wakako Tabata (JPN). In race 7, the pair headed out from the start to the right hand side of the track, an error which ultimately cost them the 27th place, but a result they fortunately have discarded. Always smiling, Betanzos reflected on their races today, “You cannot get cross. You have to continue with your mind relaxed and try to do your best. It was quite hard, because the wind was so shifty and going up and down quite a lot. In the first race we took a wrong decision at a really important moment. We should not have tacked after the start as we then had to sail from the mid-fleet.”

Unlike the other teams who are already discarding high point scores, the Spanish knew they had space to count a poor result, but they need to stay within the front of the pack if they want to add the 2011 470 World Championship gold medal to their 2011 470 European Championship title, as Betanzos acknowledged, “It could be better if we could do a good race today, as tomorrow it would have been easier. But we have to continue sailing good and it will be no problem.”

Sitting tight in second overall are Ai Kondo/Wakako Tabata, with a 13 points deficit behind the Spanish. Moving on up behind these top two teams are Israel’s Gil Cohen/Vered Buskila who, after Wednesday’s improve on form, had a consistent day with a 10,4 scoreline and move up into third place on the leader board - a key manoeuvre as the teams enter the final two races tomorrow, after which the top 10 teams go through Sunday’s deciding medal race.

One nation moves up and the other goes down. The surprise performance of the competition today was defending 470 World Champions Lisa Westerhof/Lobke Berkhout (NED), who went from third on the leaderboard, and with every chance of defending their World title, to freefall down to 11th overall. A 28th place finish in race 7 and a race 8 disqualification penalty now sees them needing to step up a gear to even make it into the top 10 and go through to Sunday’s medal race. A clearly emotional Berkhout said, "It's a long time since I was so disappointed and that was at the World Cup in 2008. We lost our title here this morning, while we were still in third place with a real chance of gold. That's a huge disappointment. It's not panic, but it's really a very big disappointment. "

It’s no exaggeration to say that in Brazil sailors have hero status, as sailing is one of Brazil’s most successful Olympic sports. 470 crew Isabel Swan is already one of those heroes, after her bronze medal success at the 2008 Olympics with helm Fernanda Oliveira. But now, it is Martine Grael and Isabel Swan who are hoping to add to that Olympic success by representing Brazil at the 2012 Olympics and then continuing onto Rio 2016. As a Rio2016 Ambassador, Swan fronted many of the Rio bidding presentations and was on stage when Rio was selected as the 2016 host city.

Grael/Swan were on a roll today, and almost did the double as after their opening win they were leading race 8 right up until just before the final mark. Italy’s Iulia Conti/Giovanna Micol unsettled their pace and rounded only one second ahead and went on to take the race win with a 10 second lead. Ashore after racing, and positioned in eighth overall, the Brazilian pair were analyzing their rig settings, clearly wanting more of the same for tomorrow.

Twenty year old Grael, who only two years ago won the world’ s pinnacle youth event, the ISAF Youth Worlds, commented, “Yeh it was a very nice day today, but the other days we did very badly because we had no good starts, which was holding us back a lot. Today we had two good starts and we have done a lot of training before this Championship so we had speed. We put all our effort on this Championship and it was very nice to see the result today.” And on sailing with an Olympic bronze medallist, Grael added, “It has been very nice over the past two and a half years , because I felt really like jumping up a level and Isabel is a really easy going person.”

Compliments came the other way too, as Isabel said, “I think Martine gives a lot of herself to sailing and is really dedicated and has talent. We also have a good plan, because if we don’t have a good plan to follow we won’t go anywhere. You have to be really professional to be here, so I think the team work helps a lot to achieve a higher level.”

Grael/Swan are one of two Brazilian teams contesting for Olympic selection, with the top placed team here gaining one point in the selection process, and then the top team at a national selection event to be held early next year awarded one point. If at that stage there is a draw, then performance at the Trofeo SAR Princesa Sofia MAPFRE 2012 will be the decider.

World #6 ranked team Ingrid Petitjean/Nadege Douroux clearly flourished in the Centre Course conditions to enjoy their best day of racing and post a 4,6 scoreline, under the watchful eye of the President of the French Sailing Federation who was in a spectator boat.

Petitjean has already represented France in the 470 Women event at the 2004 and 2008 Olympic Games event where she finished 10th and 11th respectively, with Douroux by her side in 2004. The team are back together for their 2012 Olympic quest and, whilst nation qualification for France is assured, the next stage is which of the French teams will be selected. That key decision is in the hands of the French Sailing Federation’s Technical Director, who is expected to make his announcement in January 2012. The Petitjean/Douroux pairing are used to being at the top at 470 World Championships, finishing 4th in 2012 and securing the bronze medal in 2009, but there are now new younger teams with the Olympics in their sights too. Race 7 saw the two top ranked French teams fighting for supremacy, with Petitjean/Douroux up against Camille Lecointre/Mathilde Geron and position swaps throughout the race.

Whether the French Sailing Federation President had been an aid to today’s success, Petitjean said, “He often comes and encourages us. He is a nice President, so it is always good to have some support.”

The team’s objective at the 2011 Worlds was a podium place, but with that now looking like a longshot they just want to do their best. As to what drives her to a third Olympic campaign, Petitjean said, “I have the feeling that there is always something to learn and get better, and new goals. I like sailing - it is physical and tactical and I really enjoy it. I like to have a goal and do everything possible to achieve it, so that is my motivation.”

Tomorrow, Saturday 17 December will see races 9 and 10 contested on Success Course with racing scheduled to start at 1430 hours. These two races will give teams the final chance here in Perth to qualify their nations for the 2012 Olympics, with the next opportunity being the 2012 470 World Championships in Barcelona, Spain from 10-19 May 2012.