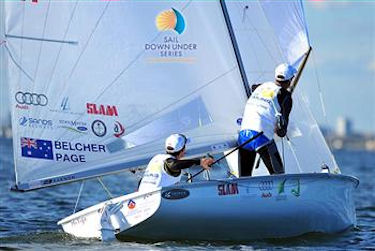 Light winds and a lack of racing dominated proceedings on day one of Sail Melbourne with Mathew Belcher and Malcolm Page leading the way for the Australian Sailing Team in the men’s 470 fleet. After delays for much of the day, racing finally got underway late in the afternoon with just one race for the 470, 49er and Laser fleets while the Skud 18 and 2.4mR fared better with two races completed.

Belcher and Page kicked off their 2010/2011 ISAF Sailing World Cup in style winning the opening race ahead of Australian Sailing Development Squad members Sam Kivell and Will Ryan.

“It was a good way to start our regatta today, and nice to finally get onto the water after sitting around all day,” said Belcher . “While the conditions were light it was definitely sailable and if it wasn’t 7pm I’m sure we would have got another race in.”

“The race management were patient and waited for the conditions to settle and we were able to go racing when many others didn’t. I wasn't getting on the windward gunwale, so it was only about three to four knots," said Page. "But it was steady and only shifting about five degrees so it was a good light-wind breeze."

Although Page and Belcher were comfortably ahead of compatriots Sam Kivell and Will Ryan in the men's event, their race wasn't without drama. The pair didn’t have it all their own way and were pushed the whole way to the finish by the Austrian women’s team skippered by Sylvia Vogl with crew Carolina Flatscher. Although scored separately, the men's and women's fleets started together and the Austrian duo of Sylvia Vogl and Carolina Flatscher almost took the honours.

"The girls scared us," was Malcolm Page's frank admission."They led all the way and we only got them down the last run. We nearly got them on the first run but they got away again and we had to do some wriggling - and praying."

“While we don’t get scored with the women’s fleet it’s always nice to get a win overall,” said Page . “They were quicker upwind but we had the edge downwind and luckily it was a downwind finish.”

“It’s great to see such close racing between the men’s and women’s fleets,” he said. “There aren’t many classes in sailing where you’ll see that.”

Coming in behind Sylvia and Carolina with a second are China's Hui Men Feng and Li Zhu Huang They have only put in a few appearances this year, but have delivered well counting a 33 at the 2010 Skandia Sail for Gold Regatta and 27 result at the 2010 470 World Championships. They will have been pleased to open the series ahead of their teammates Xiaoli Wang and Xufeng Huang who have been performing ahead of them. It will be interesting to watch this duel unfold.