On the penultimate day of racing at the 2012 470 World Championships, Mat Belcher and Malcolm Page (AUS) secured their third successive World Championship title, with their win in race 12 sealing victory for the pair. 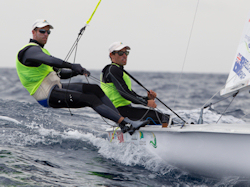 In the 470 Women Gold Fleet, the teams from China and Poland have qualified their nations to the 2012 Olympic Games. The final two Olympic qualification places in the 470 Women event will be fought out on Saturday’s final race between the teams representing Croatia, Austria and Russia. With only 4 points separating them – everything is at stake.

Another shifty day with a breeze of 12-14 knots tested the sailors to the limit.

470 Men
The 470 Men favourites and world #1 pairing of Mat Belcher/Malcolm Page (AUS) have on paper wrapped up the World Championship title with a bullet in race 12, to make it a hat trick Championship for them, with successive wins in 2010, 2011 and 2012. Their 12-race scoreline includes wins in eight races – an unprecedented achievement. Those wins did not come easy, with several times the pair found themselves nearer the back of the fleet than the front.

Malcolm Page is the most successful 470 sailor ever and, in his previous partnership with Nathan Wilmot, also secured victory at the 2004, 2005 and 2007 World Championships.

On crossing the line and sealing victory, Page said, “I was very excited. I gave Mat a lot of pats on the back and a few hugs here and there. This is my sixth 470 Worlds title, but I am as excited as the first.”

Commenting on Saturday’s medal race aspirations, Page continued, “We will just go and see what comes tomorrow. I am sure we will fight hard. We will wait and see what the weather brings tomorrow to see what the exact plan will be, but we won’t be jumping the start and we will be racing hard.”

In theory, Pierre Leboucher/Vincent Garos (FRA) also have the silver medal in their pockets. An OCS could unseat them, but there is no chance the French will let that happen. They just have to sail the course to claim their medal. So the battle is on for the bronze medal.

470 Women
“Let the bell ring for the medal race,” was the exclamation of Lobke Berkhout (NED) after she came ashore to discover that having gone into today on equal points with Hannah Mills/Saskia Clark (GBR), she and helm Lisa Westerhof end the day on an equal 59 points apiece!

“It is funny to finish on equal points again – we have never been in this situation, although we know what it is to be so tight going into a Medal Race. It is going to be interesting and the four boats only want one thing,” Berkhout commented.

Aleh is excited by the closeness of the teams going into the Medal Race, saying, “It is quite impressive. It is going to be a pretty good race tomorrow. Somebody’s going to be pretty annoyed at the end of it – that’s the first thing I can think of. With four of us that close it is winner takes all – just don’t stuff it up.”

The World Championship concluding Medal Race on Saturday will see the top 10 teams face off in a windward/leeward battle. Any one of these top four teams could win the gold medal tomorrow, and equally all of them could miss out.

Further down the leaderboard and the focus was on Olympic qualification, which was accomplished perfectly by China’s Xu Xiaomei/Yu Chunyan. Their win in race 11, followed up with an 8th placing in race 12, guarantees that China will be at the Olympics. Now it is game on amongst the three Chinese teams to determine who will be selected to that place.

Poland’s Agnieszka Skrzypulec/Jolanta Ogar made history today by becoming the first ever Polish 470 Women team to qualify to the Olympics. They knew they needed to be towards the front half of the pack in race 11, which they achieved, and then just needed a safe finish in race 12 – job done and the Olympics beckon. To say the team are thrilled is an understatement. “Now I don’t feel we are at the Olympics and I think it is going to be some time to realize we will really be there. The plan was to sail safe and smart which we did,” said Skrzypulec.

Not so much fun for the teams from Austria, Croatia and Russia who face their final showdown tomorrow as they compete for the final two nation places. With 4 points separating the teams, it is unpredictably close.

The host nation’s hopes were dashed today as Spain’s defending World Champions, Tara Pacheco/Berta Betanzos were over the line in race 12 and tumbled down the leaderboard to 18th overall.

Securing their nation qualification in Perth was the first step for Japan, and today the teams who achieved that in Perth were rewarded as Japan Sailing confirmed the Olympic selection of Ai Kondo/Wakako Tabata in the 470 Women and Ryunosuke Harada/Yugo Yoshida in the 470 Men, after their results here in Barcelona.

Harada said, “We have been training really hard and this selection means a lot to us. I am very, very happy. Ever since I started sailing, the Olympics has been my goal and dream. The fact that I am now going to the Olympics is amazing.”