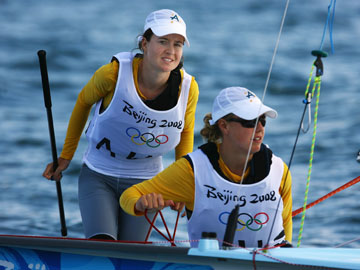 Image: © DON EMMERT/AFP/Getty Images
Australian young guns Elise RECHICHI and Tessa PARKINSON only have to finish ninth or better in Monday's Medal Race to win the gold medal in the Women's Two Person Dinghy event at the 2008 Olympic Sailing Competition.
Elise RECHICHI and Tessa PARKINSON (AUS), just 22 and 21 years old respectively, finished third and second in the final two races of the Women’s 470 Opening Series to extend their overall lead to 18-points. That means their closest rivals, Marcelien DE KONING and Lobke BERKHOUT (NED), must put a least eight boats between them and the Aussies (i.e. the Dutch win the race and the Australians finish last or fail to finish) to move into the gold medal position.

In their current position, the Australians have only one thing on their mind, “We have guaranteed silver, but we won’t be happy with it. We’re going for gold,” said RECHICHI at the ending of the day’s racing.

The Australians have made a remarkably rapid transition from youth stars to Olympic medallists. They have proved themselves superb sailors in the light conditions which have predominated through the Opening Series and on Saturday, when the pressure was at its most intense, they delivered the goods.

“This has been our best regatta in a long time,” RECHICHI explained. “Last year we lost a big regatta and from that we learned you have to lose to show you how much you want to win.”

Looking ahead to Monday, RECHICHI added, “We will have a meeting with our coach to discuss our strategies for the Medal Race and will focus on the Dutch to make sure they don’t get too far ahead of us.”

RECHICHI and PARKINSON went into the final two races of the Women's 470 Opening Series nine points up on DE KONING and Lobke BERKHOUT. Five points behind the Dutch duo were Nike KORNECKI and Vered BUSKILA (ISR). Sitting precariously in 10th place, the cut-off point for the double point Medal Race, were Lenka SMIDOVA, silver medallists at Athens in the single-handed Europe dinghy, and Lenka MRZILKOVA (CZE).

The first race went to world #1 crew Ai KONDO and Naoko KAMATA (JPN), who after a terrible start have belatedly found their form. SMIDOVA and MRZILOVA copped the win in the second race to ensure their place in the Medal Race. The wind was very light and shifty in the second race, clocking 50 degrees during the nearly 70 minutes it took to complete. Whilst the Aussies were able to maintain their consistent scoring, DE KONING and BERKHOUT started the day well with a fourth but posted a 16th place in race 10.

The overall point spread is RECHICHI and PARKINSON with 25 points. DE KONING and BERKHOUT have 43 points and Fernanda OLIVEIRA and Isabel SWAN of Brazil are third overall on 58 points. Nine of the boats have the opportunity to win a medal, with the biggest battle set to centre on the bronze, with just 11 points separating third to seventh place overall.