Every race counts, but with three races today it was particularly crucial for teams to pump in some good scores and position themselves as solidly as possible before Tuesday’s final two races of the qualification series at the 2012 470 World Championships. 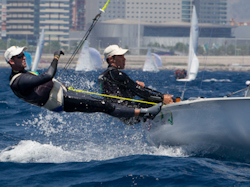 Every race counts, but with three races today it was particularly crucial for teams to pump in some good scores and position themselves as solidly as possible before Tuesday’s final two races of the qualification series at the 2012 470 World Championships.

Perfect sailing conditions ensured Barcelona lived up to its reputation as a spectacular sailing venue. Racing got underway in 12 knots building to around 15-17 knots as the fleets completed race 4, with fairly wavy conditions.

It doesn’t get better than three wins from three races, which is exactly what Lisa Westerhof/Lobke Berkhout (NED) delivered in the 470 Women blue fleet, matched by Mat Belcher/Malcolm Page (AUS) racing in the 470 Men yellow fleet.

470 Women
Racing at the front of the 470 Women fleet is tough, with no margin for error and no comeback. Whilst, it is impossible to identify an outright favourite to win the 2012 470 World Championships, the two-time World Champions in 2009 and 2010, Lisa Westerhof/Lobke Berkhout (NED) had no errors on their scorecard and very simply were in control of each of today’s three races in the 470 women blue fleet. They went to the right of the course in every race and won convincingly.

“It was a lot of fun, nice waves, nice breeze and the wind was picking up a little bit. Race 4 we were leading from the outset, but the other two races were a battle,” said Westerhof.

Packing in an almost equivalent performance in the 470 women yellow fleet, were Gil Cohen/Vered Bouskila (ISR) who posted a 2, 1, 1 to end race day 2 in second overall, just 2 points behind the Dutch.

Rounding out the top three are the world #1 ranked pair of Ai Kondo/Wakako Tabata (JPN) with a 1,5,2 scoreline.

An error fraught race 4 for defending World Champions, Tara Pacheco/Berta Betanzos (ESP), after a port/starboard infringement. With a 4,2 in the bag already, they set off on starboard to the leeward of the fleet in race 4, then tacked onto port go to the right hand side of the course. But a collision with the Malaysian team resulted in a near capsize and two penalty turns for the Spanish, who end the day in eleventh place.

China’s Xu Xiaomei/Yu Chunyai are intent on qualifying their nation to the Olympics and had a solid 10,10, 3 and are currently positioned as the top placed unqualified nation in 13th overall – an unlucky number for some, but not for the Chinese so far. Keep racing like this, and they will be on their way to the Olympics as whoever qualifies China will be the team selected. Other unqualified nations currently tantalisingly close to nation qualification include Russia, Denmark, Poland, Croatia, Austria and Estonia.

One of the youngest helms competing is Lara Vadlau of Austria, who has only recently made the transition from the 420 to the 470, and owns a gold medal from the 2011 ISAF Youth Sailing World Championship. Racing with crew Eva-Maria Schimak, Vadlau is hoping to qualify Austria to the Olympics and is poised in 25th overall with a 15, 16, 14, 6 race series. “The plan is to sail like normal, have fun and qualify,” explained Vadlau. Dressed in colourful sailing attire, Vadlau is counting on her shorts. “They are supposed to be my lucky shorts, because they look nice and I like them. It is a thing in my mind that maybe when I wear my lucky shorts it is helping us,“ she said with a big smile.

A comeback is on the cards for Hannah Mills/Saskia Clark, who have a reputation for making things hard for themselves, or as they would put it, “we relish a challenge”. A penalty for being over the line in race 1 yesterday, was exchanged for a solid, 2,7,7 scoreline today. Clark seemed happy, explaining, “We had an alright day – three top tens. Trying to keep it a bit tidy after the disaster yesterday.“ Before Mills chipped in, “we are good at having disasters on the first day!”

With Olympic qualification on the minds of many, for Rike Belcher, who will be representing Germany at the Olympics with helm Kathrin Kadelbach, the 2012 470 Worlds and 2012 Olympics are bitter sweet. “For me it is a bit sad as in 90 days my Olympic career will be over,” explained Belcher, referring to her plans to focus on her post-Olympic career and a family. Solid racing so far positions the pair in 7th overall.

470 Men
Mat Belcher/Malcolm Page (AUS) demonstrated why they are two-time World Champions today, storming to victory in all three races, and sent out a clear message they are the team to beat here at the 2021 470 World Championships.

Belcher commented, “To get those kind of results at a World Championship, you couldn’t ask for anything more. We are happy we had a bit of wind today and the way we were sailing felt quite stable and we were into a groove. We worked out that at the last two Worlds we have done the triple as well. It is something you don’t expect as you sail race by race and we were lucky today to get the three wins.”

In the 470 Men red fleet, Alavaro Marinho/Miguel Nunes (POR) had the most consistent form, with a 2,2,1 and are now positioned 6 points behind the Aussies in second overall.

Croatia’s Sime Fantela/Igor Marenic, the defending bronze medallists, dominated in the blue fleet and are in third overall just one point behind the Portuguese.

Behind these leading boats, the battle is on for Olympic qualification. Currently the highest placed unqualified nation is Russia, with the Sheremetyev brothers Mikhail and Maxim in 13th overall. Two more good results in the bag tomorrow and they should have done enough to qualify their nation.

Not far behind are the teams from Canada, Ireland, Korea, South Africa, Turkey and Slovenia who are currently leading the charge of the nations gunning for Olympic selection, but there are still two more races to the final series, which itself consists of a further six races.

An impressive race day for Canada’s Luke Ramsay/Mike Leigh with a 2,1,4 scorecard. “They were challenging conditions and we were pretty fast uphill and really working on our speed. Once we got out in front, it was much easier to control the fleet downwind. It was really good and we are really happy,” explained Ramsay.

South Africa’s Team Race Ahead also had great form with a 13,4,7 and led the red fleet to the windward mark in race 3, before dropping back to finish fourth overall. Asenathi Jim/Roger Hudson were particularly delighted with race 3, as Jim explained, “We had a great start, we thought we were over, but other boats went back and the flag went down, so we knew we were clear. We then just put our heads down and hammered the boat and made some good calls upwind. At a 470 World Championships to round the top mark first was a good moment for us and a first.”

If the South African team keep the same pace on tomorrow, they should find themselves safely through to the gold fleet.

All fleets have been re-seeded, so tomorrow the 149 teams competing at the 2012 470 World Championships will be up against a different set of opponents. Just two more races tomorrow to complete the qualification series and determine the split for the Gold and Silver fleets in the 470 Women and Gold, Silver and Bronze fleets in the 470 Men. The race throw out will come into play after five races, so expect some leaderboard shuffling.

Tuesday will prove to be a crucial day and will determine some of the next nations qualifying to the 2012 Olympic Games – so a day of ecstasy for some and heartache for others is to be expected.